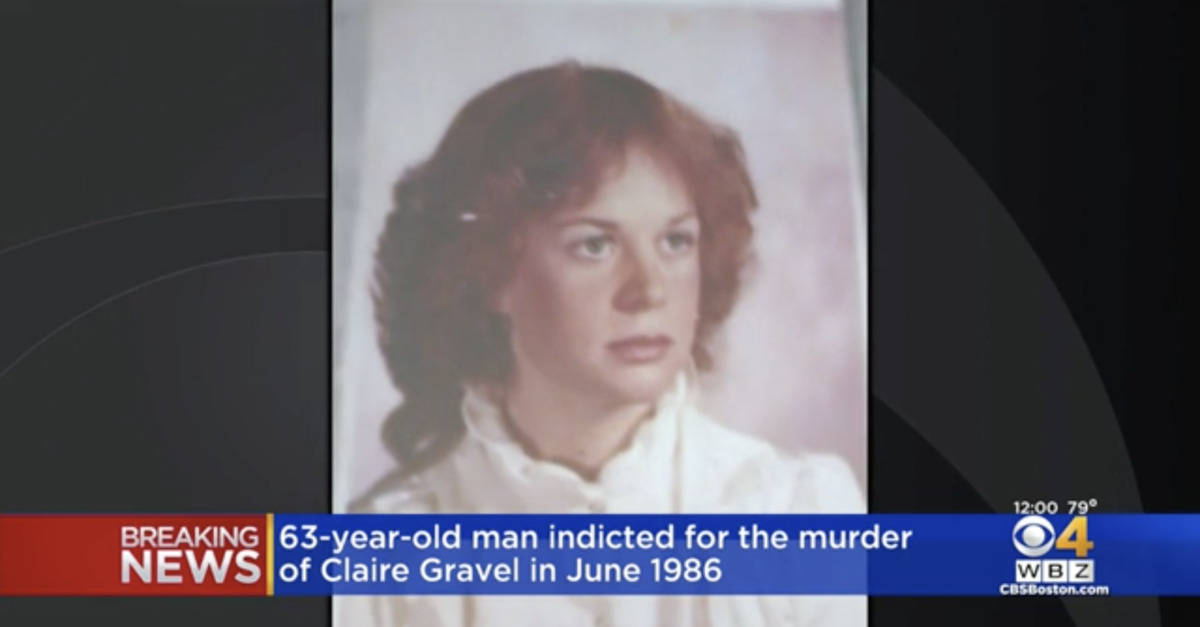 Claire Gravel was just 20 years old when she was strangled to death in June 1986. Now, nearly 40 years later, Massachusetts law enforcement officials say they have finally tracked down her killer.

“The man we believe who is responsible for the murder has been indicted,” the DA said, identifying John Carey, 63, as the alleged murderer in an indictment issued by Essex County grand jurors.

The defendant is “currently serving a prison term” in the Massachusetts Correctional Institution at Concord for a 2008 attempted murder conviction, Blodgett said.

Gravel’s body was discovered on June 30, 1986 in the woods near Massachusetts Route 128. The night before, the Salem State College sophomore was out celebrating with friends after a softball game at Major Magleashes’ pub, which is still in operation. A friend dropped her off at her apartment around 1:30 a.m. the next day.

According to The Salem News, speculation and rumors ran rampant in the immediate aftermath of the college girl’s death. As friends mourned, police admitted to being “stumped,” and “[a]fter that July 5, Gravel’s name fell from the headlines,” the paper reported.

For nearly 30 years, the case remained cold. In 2016, the DA’s office issued a belated announcement that new evidence surfaced in 2013.

Blodgett corrected that assessment and said the new evidence had actually been recovered the year before, in 2012, meaning another 10 years would pass before law enforcement named their suspect.

Blodgett said that evidence recovered from Gravel’s clothing was “instrumental” in charging Carey with her murder, but the prosecutor generally declined to elaborate on the contours of the investigation and what led authorities to charging the defendant.

“We followed evidence we had,” the DA said, promising more transparency as court proceedings move forward. “We developed new evidence as well that will be disclosed at his arraignment.”

Carey has allegedly been considered a person of interest in the case for some time, though Blodgett declined to say exactly how long. In response to a question about a relationship between the defendant and the victim, the DA said there was currently “no motive.”

While mostly keeping mum on the particulars, Blodgett said that work on Gravel’s unsolved murder had more or less continued unabated for years.

“This case was never forgotten,” the DA insisted. “Any lead was pursued to the end.”

He added that authorities had been in touch with the deceased’s surviving sisters and father.

“For 36 years, Robert Gravel has carried this photo of his daughter, Claire, in his wallet,” Blodgett said, motioning at a projected image on the wall of the slain North Andover native.

“We continuously review cold cases, hoping that new techniques and a fresh look will result in a breakthrough,” the DA went on. “We are mindful of the victims, and their family members who continue to want answers.”

The defendant will be arraigned in a Salem “security court” at a later date, the DA noted.

Near the end of the press conference, Blodgett provided details about an entirely different case: a recent triple murder-suicide in the nearby city of Lynn, Massachusetts. The news on that case concerned the pace of the investigation, hampered, the DA said, by the necessity of obtaining a foreign language translator.