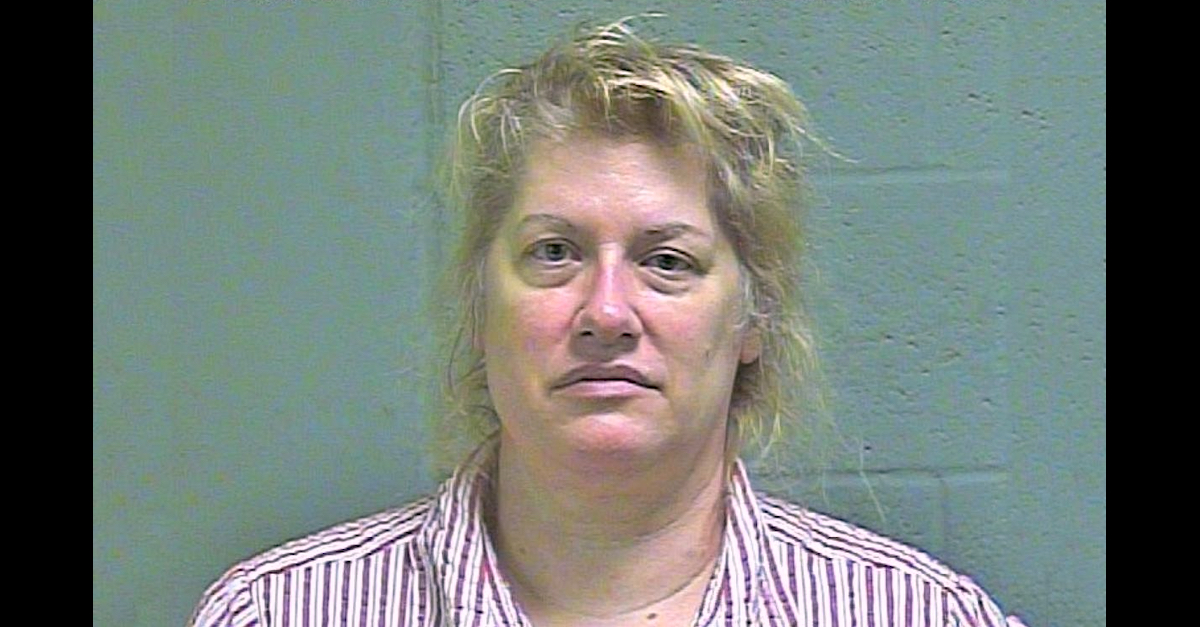 Regan Nichols appears in a mugshot taken by the Oklahoma County Sheriff’s Office.

A former Oklahoma doctor has been sentenced to spend the next seven years behind bars for overprescribing pills and causing the death of a patient, Oklahoma City NBC affiliate KFOR-TV reported on Friday.

A jury recommended that the former doctor, Regan Ganoung Nichols, should spend ten years in prison.  A judge decided that seven years was a better sentence and suspended the rest of the recommended time.  Nichols is required as part of the sentence to “help addiction patients either through prison ministry or an outside clinic,” the judge decided, according to KFOR.

Prosecutors asked for a full ten-year sentence and said Nichols showed no remorse over the death of her former patient.  The defense asked for probation and claimed Nichols was not a threat to society.

Prosecutors alleged that at least five patients died because of Nichols’ care, but a jury convicted her of only one count of second-degree murder involving the death of only one patient.

Oklahoma City CBS affiliate KWTV-DT said the jury worked long into the night and came back the next day after only a few hours of sleep before deciding to convict on one count only.  The jury was sequestered and wanted to pound out a decision without spending too much time in a hotel.

“County officials said some of them fell asleep in the courtroom overnight,” KWTV reported.

The Oklahoman said that jurors deliberated for almost twenty-four hours.  KFOR said the verdict came only one day after closing arguments.

The state told jurors that “Nichols prescribed to patients, with little medical examination, hundreds of pills in suspect combinations,” The Oklahoman continued.  According to an affidavit obtained by the newspaper, Nichols admitted writing some prescriptions before she even saw some patients.

The death of Chealsy Dockery, 21, led to Nichols’ conviction.

Both Nichols and her husband took the stand during her trial.

“I’m happy to know she’s going to prison,” Joy Thorp of the Oklahoma Attorney General’s Office told KFOR.  “I would’ve loved 10 years in prison, but I think the judge made the decision based off what she felt was right.”

Nichols’ attorney, Tommy Adler, said he would appeal the verdict.

“Any day that we can spare Regan Nichols from being in prison is a good day. I think suspension of any portion of the sentence is appropriate, it’s not everything that we wanted,” Adler told KFOR.  “If this is murder, then every medical malpractice case in this court house can potentially be filed as a murder case. I think that can have an incredibly chilling effect on the practice of medicine in this state.”

Adler told the jury that Nichols often treated patients with chronic pain and that his client could have been accused of malpractice had she not written the prescriptions requested, The Oklahoman reported.

Back in April, after Nichols was convicted, Oklahoma Attorney General Mike Hunter issued the following statement about the case:

The facts and the evidence in this case were clear – through her reckless overprescribing, Regan Nichols put her patients in danger, which led to tragic deaths. The victims, and the many who became addicts because of her irresponsible behavior, were individuals who trusted her with their lives. She put profit over their very existence, which is not only criminal, but also immoral. To be abundantly clear, Regan Nichols is in the category of a tiny minority of doctors who care more about money than their patients. The vast majority do everything they can to ensure the wellbeing of the Oklahomans they treat. I thank the jury for recognizing that distinction and finding her guilty.

I also appreciate Senior Deputy Attorney General Joy Thorp, Assistant Attorney General Dane Towery and their team, who poured their hearts and souls into this case. They worked tirelessly for this outcome. Not just to secure the guilty verdict, but for the family members and surviving loved ones of the victims, who died horrible deaths at Nichols’ hands.

It is my fervent hope that this outcome will give the victims’ families some semblance of peace.