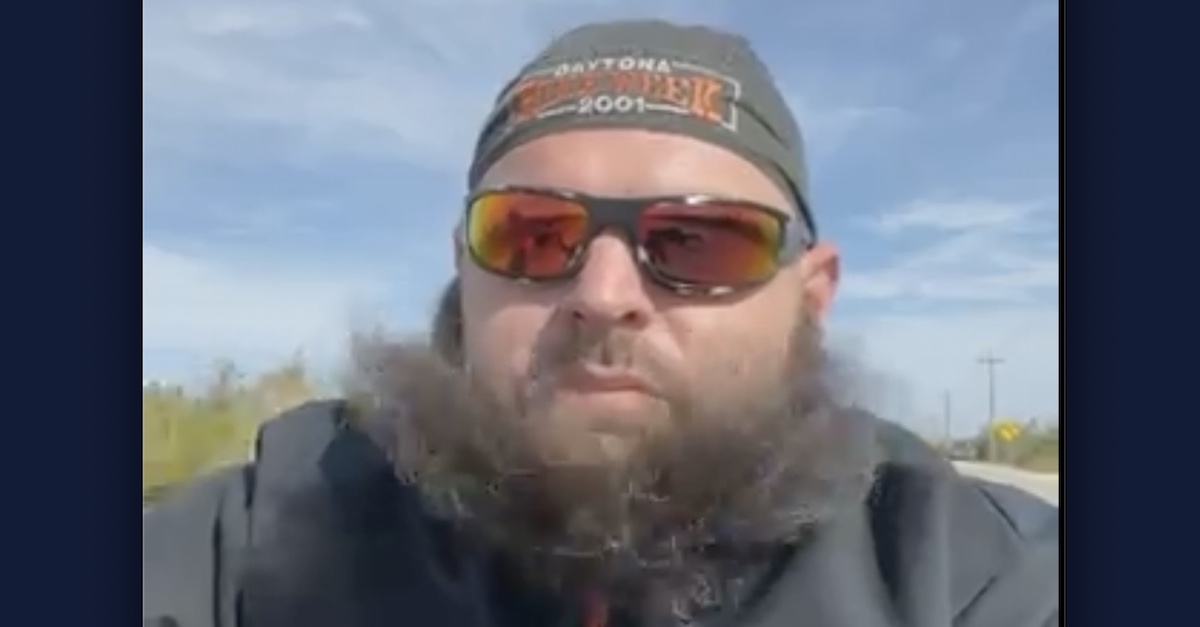 A 45-year-old man in Florida was arrested for allegedly battering his 33-year-old girlfriend with a sex toy following an argument on Thanksgiving Day. Christopher John Pacitto was taken into custody on Thursday morning and charged with one count of misdemeanor domestic battery, court records reviewed by Law&Crime show.

According to a copy of the probable cause affidavit obtained by Law&Crime, deputies with the Pinellas County Sheriff’s Office at approximately 4:40 a.m. on Thursday, Nov. 24 responded to the Sun Island Motel, located in the 8300 block of St. Pete Beach.

Upon arriving at the motel, deputies allegedly learned that the 6-foot-2 300-pound Pacitto “actually and intentionally” struck the victim, his girlfriend and co-habitant, against her will when he “threw an object” at her “leaving [a] bruise on [her] torso,” the document states.

What started as a verbal altercation between the Pacitto and his girlfriend allegedly escalated into physical violence as he was packing his personal belongings into his luggage.

“The defendant got into a verbal argument with his girlfriend of seven months. While the defendant was packing his suitcase to leave the room, he began throwing the victim’s items out of the suitcase,” the affidavit states. “During that process, the victim advised [that] the defendant hit her with a sex toy on her torso, leaving a bruise.”

After deputies on the scene read Pacitto his Miranda rights, he allegedly admitted that he did throw several items, but explained that he “does not recall exactly what items” he launched, per the document. Deputies at approximately 5:19 a.m. took him into custody and booked him at the Pinellas County Jail.

The affidavit additionally states that Pacitto’s behavior indicated that he was under the influence of alcohol at the time of his arrest.

He was released from jail the following day after posting cash bond of $1,000, jail records show.

A judge issued a court order requiring Pacitto to surrender “any and all firearms and/or ammunition” to the Pinellas County Sheriff’s Office within 24 hours of his release and to stay away from the victim.

In court documents filed Monday by Pacitto’s attorney, Seth Shapiro of the Morris Law Firm, the defendant entered a written plea of not guilty. Shapiro did not immediately respond to a message from Law&Crime seeking comment on the allegations against Pacitto.

He is scheduled to appear again in court before Pinellas County Court Judge Holly Grissinger at 10:30 a.m. on Dec. 1.

Pacitto is the president and owner of Velocity Engineering Services in Fort Myers, Florida, according to his LinkedIn page.

Believe it or not, this is not the only sex toy-related incident to make the crime beat headlines in Florida this month, as a 34-year-old woman in St. Lucie County was arrested after she allegedly got into a physical altercation with her boyfriend. According to a report from Miami ABC affiliate WPLG, the suspect took the sex toy from her boyfriend and refused to give it back. Things allegedly spiraled out of control when the man reached for the purse containing the toy and the two began to struggle.