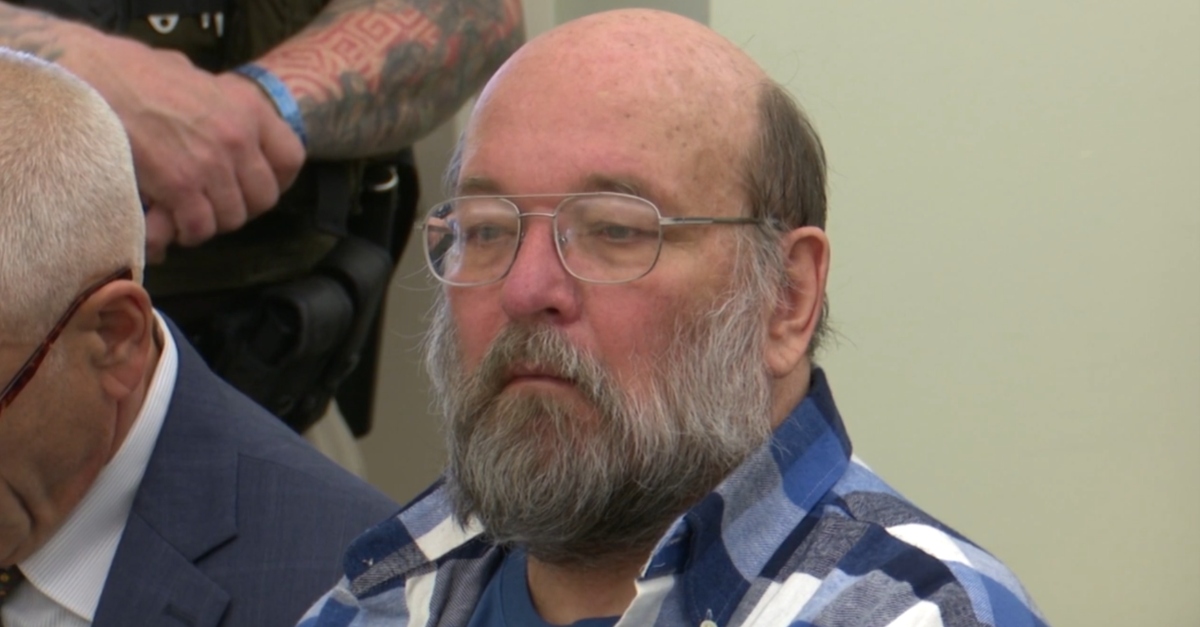 Lloyd Barrus at his sentencing hearing.

A 66-year-old “extremist” with a history of getting into shootouts with law enforcement was sentenced to prison on Friday because one of those confrontations turned deadly. Lloyd Barrus, 66, must serve three concurrent life sentences without parole, according to local outlets in Montana. He was in the driver’s seat as accomplice and now-deceased son Marshall Barrus, 38, fired fatal shots, killing Broadwater County Deputy Mason Moore, deputies said.

Their motive was that they hated the government and law enforcement, authorities said.

“This case is an evil partnership between Lloyd Barrus and his son Marshall Barrus to satisfy their desire, to satisfy their hatred of the government and law enforcement,” prosecutor Daniel Guzynski said, according to KRTV.

Father and son discussed undergoing a “suicide missions,” before speeding by deputy Moore’s vehicle at 100 miles per hour south of the city of Townsend on May 16, 2017, according to The Lewiston Tribune.

Marshall Barrus died later in a later shootout with law enforcement. Only Lloyd Barrus would face charges for Moore’s killing. Jurors ultimately convicted him in September 2021 of three counts of deliberate homicide by accountability and two counts of attempted deliberate homicide.

“I don’t know that there was a plan per se, but these two men with their extremist anti-government beliefs were both out of control,” Judge Kathy Seeley reportedly said Friday.

She continued to dismiss the defense’s argument that defendant Barrus, who lives with delusional disorders, did not understand the criminality of his actions and could not confirm his actions under the law. Seeley–as well as Moore’s family–maintained that the 66-year-old was responsible for what he did.

“Please do not allow this man the opportunity or possibility to ever do this again to another family,” she said in court, according to KPIV. “He has proven by his past behavior that he will do this again and again.”

Seeley took the same position, saying in her ruling that she did not believe that the public would be safe if Lloyd Barrus were free.

The defense had argued he should go to a state hospital for treatment.

Barrus takes the stand. Says he’s sorry for the Moore families loss, but says he doesn’t know if Moore “deserved it or not.” pic.twitter.com/iToHlUc836

This is not the first time Barrus got into a tense confrontation with officers.

Lloyd Barrus, son Jeffrey Barrus, and a woman reportedly got into a shootout and standoff with law enforcement in Nevada and California in March 2020. They reportedly fired at a California Highway Patrol helicopter and though no one was injured, the pilot had to land.

Years later in the Moore case, prosecutors ultimately stopped seeking the death penalty because of Barrus’ mental health history, something that the deputy’s brother Nebraska Moore lamented as an “unwarranted mercy.”

“The next time I make popcorn, I will regret that I am not eating it at his execution,” he reportedly said. “The next time I have a beer, I will take great satisfaction in knowing that while there is alcohol in prison, it’s usually fermented in a trash bag in somebody’s toilet.”