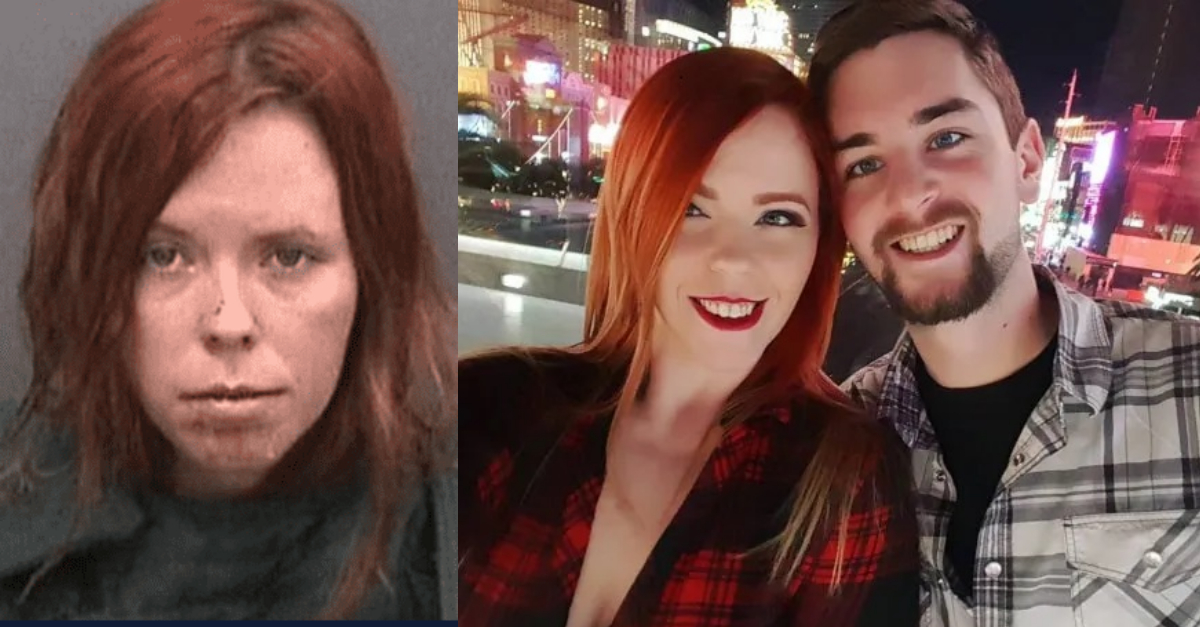 Melissa Turner (left in mugshot courtesy of Hillsborough County Sheriff’s Office) told jurors that she stabbed her fiancé (right with Turner in handout from her lawyer) because she feared for her life during a drunken brawl.

The cosplay model who fatally stabbed her fiancé must spend 20.5 years in prison for second-degree murder.

Melissa Turner, 29, was convicted in February of killing Matthew Trussler, 25. She testified that he attacked her, and that she had to fight back, but Trussler’s family denied the abuse allegations made against him. Judge Samantha Ward clearly did not buy Turner’s self-defense claim.

“This jury did not believe her claims of self-defense nor does this court,” the judge said Friday, according to WTVT.

Before the conviction, Turner rejected a plea deal that would have resulted in prison for 25 years.

She claimed Trussler had a pattern of abusing her, and that this culminated with him attacking her in October 2017. In her account, he woke her up after a day and night of drinking. Trussler choked her, threw her across a counter, and grabbed a knife, Turner claimed. He put the knife down but began to strangle her, she said. Believing he was going to kill her, she stabbed him with the same blade, Turner further claimed.

Melissa’s mother also defended her to the court.

“She’s never been a confrontational person she tries to avoid it and hide her pain,” Wanda Turner said Friday.

But authorities said Melissa waited almost four hours to seek help after stabbing Trussler. They cited the man’s watch, which measured his heartrate. When first responders arrived, defendant Turner initially claimed to have no idea what happened to him, only saying she found him on the back patio.

Her defense lawyer acknowledged it was her on surveillance footage saying things like “I hate you,” “get up,” “go fuck yourself,” and  “so fucking die,” amid what authorities described as “smacking” sounds around the time of Trussler’s death.

“We have several issues supporting why we believe that the jury should find Ms. Turner not guilty,” attorney John Trevena previously told Law&Crime. “These issues include expert testimony from our audio/video expert Bruce Koenig that the Nest video/audio recording from a neighbor across the street was manipulated in select areas to amplify the volume to make it sound like Ms. Turner was screaming much louder and the portions wherein the alleged victim is speaking are completely inaudible. Further, there are the issues of self-defense and heat of passion.”

As Judge Ward said, however, jurors did not buy the story either.

Matthew Trussler’s family denied the abuse claims, and one of them said Turner is no “innocent girl.”

“This is not a story about a poor innocent girl,” said Matthew’s brother Sean Trussler, sobbing, according to WTVT. “This is a woman who intentionally isolated and manipulated a good kid away from his loving supportive family.”

Their mother Margaret McLaughlin said that Turner’s “contrived” abuse story caused as much pain as Matthew’s death, and that Friday’s sentencing would have caused him “great anguish.”

“You and I both know that Matthew was the best thing that ever happened to you,” she said.

Chris Spargo contributed to this report.

[Mugshot via Hillsborough County Sheriff’s Office; image of Turner and Trussler via Trevena.]