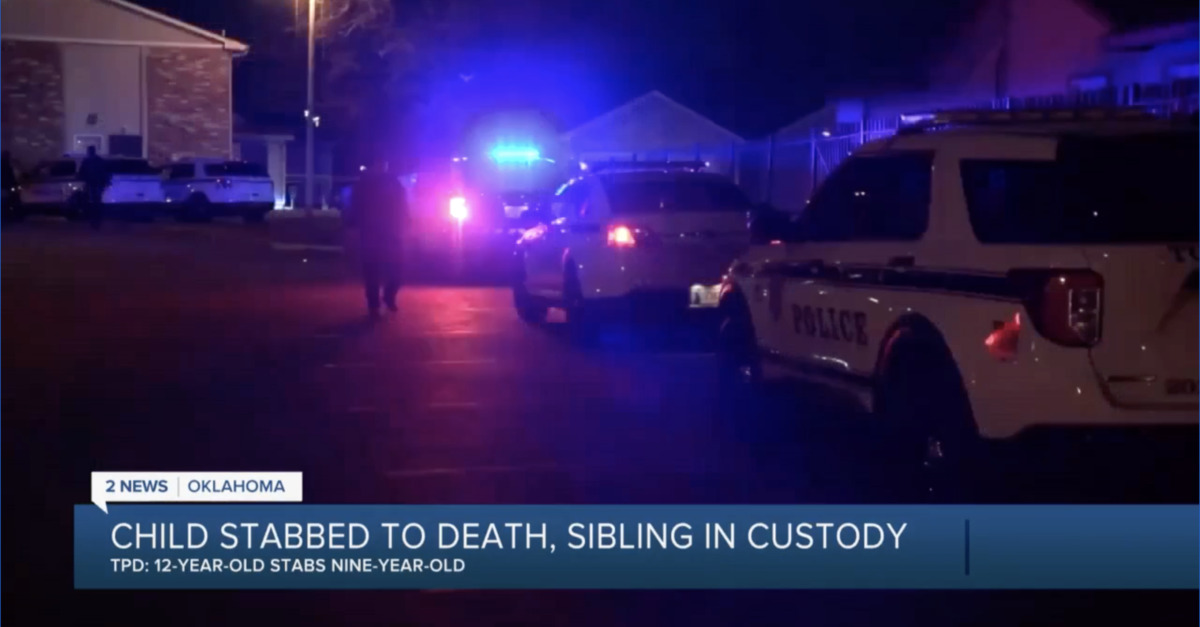 A 12-year-old girl in Oklahoma allegedly confessed to stabbing and killing her 9-year-old brother while the siblings’ parent slept last week.

“Officers learned the children’s parent was upstairs asleep when the 12-year-old daughter woke the parent up and said that she had stabbed her 9-year-old brother,” the Tulsa Police Department said in a press release issued Friday, Jan. 6, 2023.

The fatal incident occurred at a house in the downtown St. Thomas Square neighborhood of the Sooner State’s second-largest city just before midnight on Thursday, Jan. 5, 2023, police added.

Paramedics and firefighters were already on the scene and attempting to resuscitate the 9-year-old victim with CPR when responding officers arrived, the TPD said.

The boy was then taken to a nearby hospital and immediately placed into surgery, but he succumbed to his injuries at around 2:30 a.m. the next day, according to the press release.

Details about the incident are currently scarce but the extremely young ages of both the alleged suspect and victim have caused law enforcement to muse about the nature of the shocking slaying.

“All homicides are tragic, but the 2nd homicide of 2023 in Tulsa shows a definitive societal problem,” Tulsa Police Chief Wendell Franklin said in a tweet posted Friday. “The question is, how does society address a child killing another child?”

For now, local authorities are taking up the issue by arresting the girl and placing her into the custody of the Tulsa County Family Center for Juvenile Justice. The investigation into the homicide is being conducted by the TPD’s Child Crisis Unit and is said to be ongoing.

It is unclear if charges, homicide-related or otherwise, against the 12-year-old have been – or will be – filed by law enforcement.

“Intent is going to be a key component that the court system will have to work out,” Tulsa Police Captain Richard Meulenberg told Tulsa-based Fox affiliate KOKI. “Obviously we did some interviews, but interviews with a 12-year-old are very preliminary. This, unfortunately, has no easy end or easy path, this is going to be a long convoluted process that’s going to be extremely taxing on everyone involved in this.”

Police said a motive is unclear but noted that the homicide weapon was a knife, the TV station reported.

Under recently-enacted Oklahoma law, children 12 and under cannot be incarcerated, barring a lengthy list of exceptions.

One such exception, apparently relevant to the stabbing, includes situations where “all alternatives have been exhausted and the child is currently charged with a criminal offense that would constitute a felony if committed by an adult and it has been indicated by a risk assessment screening that the child requires detention.”

The law also provides that any child detained under such circumstances must have their detention reviewed by a judge within 30 days. a court can then, “for good and sufficient cause,” extend detention for up to 60 days, generally, and an additional 60 days if the child is detained “for the commission of a murder,” but only “if it is in the best interests of justice,” the statute says.

Another Oklahoma law precludes trying a 12-year-old as an adult for murder – the cut-off is 13 years of age.

Law&Crime reached out to the TPD for additional details and comment on this story but no response was immediately forthcoming as of the time of publication. An open records request for all data associated with the incident, including concomitant police reports, was also submitted with the agency.