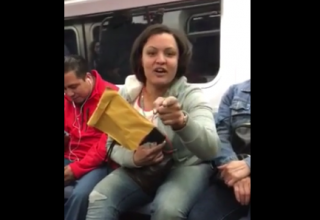 A Facebook post by Pearl Love, a trans woman who says she works as a social worker for an LGBT organization, describes a harrowing incident that occurred during her commute last Thursday. While riding the subway in Manhattan, a woman sitting across from Love started shouting obscenities and slurs at her. Love started recording the woman on her phone, but that didn’t slow her down one bit. As you can see in the video below, she just kept going, eventually getting up and apparently striking Love.

Warning, the video contains A LOT of strong language:

We called the NYPD to follow up on the incident, but so far no report has been made.

Should Love file a complaint with the police, the woman could potentially be charged with a hate crime. As a former prosecutor in New York City, I would say that the attacker could be charged with New York Penal Law Section 120.15, Menacing in the Third Degree, which is when a person “by physical menace…intentionally places or attempts to place another person in fear of death, imminent serious physical injury or physical injury.

That charge can be upgraded to a hate crime under NY Penal Law Section 480.05 if the offender intentionally commits the offense or intentionally chose the target of the offense “in whole or in substantial part because of a belief or perception regarding the race, color, national origin, ancestry, gender, religion, religious practice, age, disability or sexual orientation of a person,” even if the perception is incorrect.”

Since the incident captured in the video appears to be inspired by the woman’s perception of Love’s gender and sexual orientation, that should qualify. We talked to a representative from the TransLatina Network who confirmed Ms. Pearl worked there, and we left a message to speak with her.