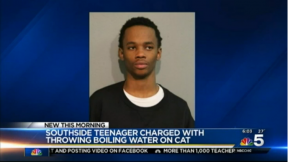 Three months after a North Carolina woman was arrested for wrapping duct tape around the mouth of her dog, a Chicago teen has been charged with dumping a pot of boiling water on a cat. The common thread in each disturbing incident of animal cruelty was a posting to Facebook.

Leon Teague, an 18-year-old from Chicago’s Southside, was arrested after allegedly scalding a cat with boiling water and subsequently posting a video of the incident to his Facebook page. Teague has been charged with one felony count of animal torture and one misdemeanor count of animal cruelty

The video, posted Tuesday night, shows a black-spotted cat sitting outside a window adjacent to a blue litter box on a fenced-in porch as an unidentified man appears to walk towards it, luring the cat in his direction before throwing a pot of boiling water on the unassuming feline. The video shows the poor cat scampering away as its attacker verbally spewed foul epithets at the defenseless animal.

The Cook County Sheriffs Department and the Chicago Police Department Animal Crimes team were able to identify Teague as a result of the video.

As for the cat, it was last seen alive, but ran away as offices attempted to capture it.