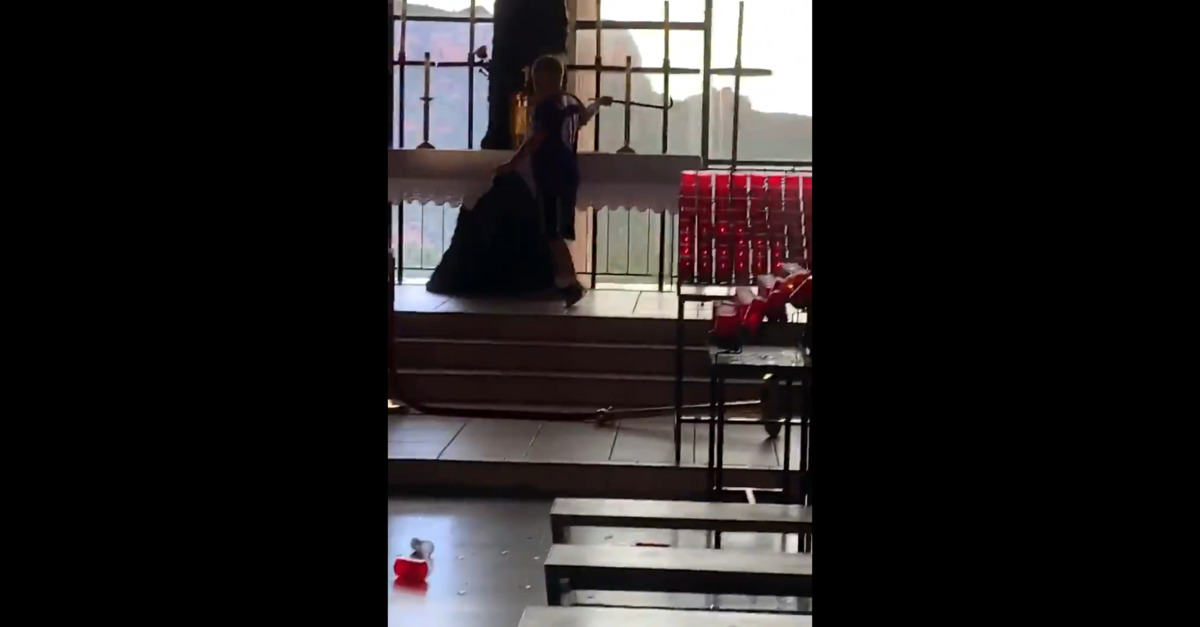 A man in Arizona was recently arrested and charged with vandalizing a Catholic chapel. Police believe he’s a member of the pro-President Donald Trump conspiracy theory/support group known as “QAnon”.

According to The Arizona Republic, the Chapel of the Holy Cross in Sedona was attacked by a man swinging a crowbar into the altar on September 25th.  The attack smashed several sacred chalices. The incident was caught on video and posted online. Afterwards, the same man allegedly sprayed “evil” onto the sidewalk in front of the church.

JUST IN: Man goes crazy and smashes The Chapel of the Holy Hill in Sedona screaming about the Catholic Church supporting human trafficking as he left. All this happened right in front of me! Wow. @ABC7Chicago ABC7Chicago pic.twitter.com/UDKxlyZes3

The Sedona Police Department later arrested 41-year-old Timothy Larson and charged him with aggravated criminal damage, disorderly conduct, and a hate crime. Authorities highlighted Larson’s Twitter account which allegedly identified him as a fervent believer in the far-right QAnon conspiracy theory that so-called “deep state” elements are angling to somehow subvert President Trump and his supporters.

QAnon-aligned conspiracy theorists frequently make false accusations against high-profile members of the political and media establishment and also issue predictions and prognostications which never come to pass — facts which only serves to deepen their followers’ irrational faith in the 21st century mystery cult.

Larson’s alleged Twitter account contains numerous references to the QAnon theory.  It contains a confession of sorts that he planned to attack the church at an earlier date but didn’t have the time.

Police ultimately caught up with Larson after being alerted by someone who used nextdoor.com — an Orwellian app wherein community members share and gossip information with one another about real and perceived violations of social and legal norms.

“The reason we were able to capture this guy so quickly was because of social media and our ability to connect with our community through nextdoor.com,” he told the Republic. “I took a screenshot of [a social media post about the vandalism] and I sent it out on Next Door via an urgent alert.”

The Chapel of the Holy Cross is one of the most visited tourist attractions in the Grand Canyon State.

“Churches and stores and hospitals and libraries — these types of things are supposed to be safe zones from crime and violence but it doesn’t appear that that’s really the case anymore,” Husted added.

Parishioner Betty McGinnis was in the church on the day of the attack and recalled the horror she felt.

“The spray paint was all across here,” McGinnis told local NBC affiliate KPNX. “We had glass and so forth all over here. My first question was — please tell me everybody’s okay.”

“It says peace to all who enter,” McGinnis added. “We lost that for a few minutes.”