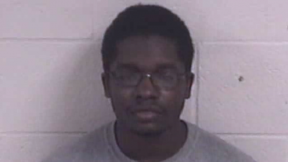 A Galveston city policeman has been indicted by a grand jury on a misdemeanor criminal trespass charge arising from the search of a self-described video activist’s website.

Philip Turner, a 25-year-old correspondent (shown above) for the website photographyisnotacrime.com, was jailed after he allegedly refused to identify himself to police when questioned over both his filming of license plates and his tracking of police movements in and around Galveston.

Sgt. Archie Chapman allegedly “located, entered, and searched” the car of Turner after he was observed filming near the Galveston police department, according to the Galveston County district attorney’s office. Charges were soon dropped and Turner was subsequently released.

While the irony of being arrested for filming while working for a site called photographyisnotacrime.com is evident, Turner’s arrest helps feed the site’s narrative which is chronicling incidents in which journalists and citizens from all over the country are being harassed, threatened and arrested for recording in public. However, lurking around police departments is likely to elicit a response from concerned members of law enforcement.

Chapman’s attorney, Greg Cagle, said his client was worried about the safety of his colleagues and the jail staff who worked in the nearby building. “Sgt. Chapman was trying to do his job as a police officer,” Cagle said. “He had no motive other than to protect the public and the officers.”

Chapman has not been arrested, a judge must first sign-off on the grand jury’s indictment.

The sergeant has been placed on administrative duties and could face up to 180 days in jail and a $2,000 fine if convicted, according to prosecutors.

[h/t and screengrab via HoustonChronicle]