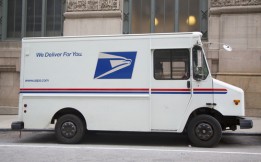 For Glenn Grays, a federal employee of the United States Postal Service (USPS), March 17 was an average day. The postal worker was delivering mail along his normal route when an unmarked vehicle nearly hit his mail truck — minutes later he was the one under arrest. Now, the NYPD will conduct an internal review of the incident.

Grays was on delivery when the unmarked police car just missed hitting his truck. After the 27-year-old shouted at the driver of the vehicle, four plain-clothes police officers emerged from the vehicle and converged on the man, demanding identification.

The confrontation with the undercover cops was caught on camera, with several bystanders filming the incident. The video appears to show the four cops, and one lieutenant, asking Grays to “stop resisting” arrest, though from the video it does not appear Grays is doing so.

The mailman was then handcuffed and placed in the back of an unmarked police vehicle. At the local precinct, Grays was summonsed for disorderly conduct, which will require him to appear in court.

Brooklyn Borough President Eric Adams, a Democract, joined Grays at a press conference indignant about the perceived treatment and civil rights violation of the federal employee. Adams, a former police officer said, “[t]hey issued him a summons in hopes of sweeping this under the rug.”

Grays told The New York Times the officer driving the vehicle said to him, “I have the right of way because I’m law enforcement.” Adams added, “It is not a crime for someone to voice outrage after almost being struck by a vehicle.”