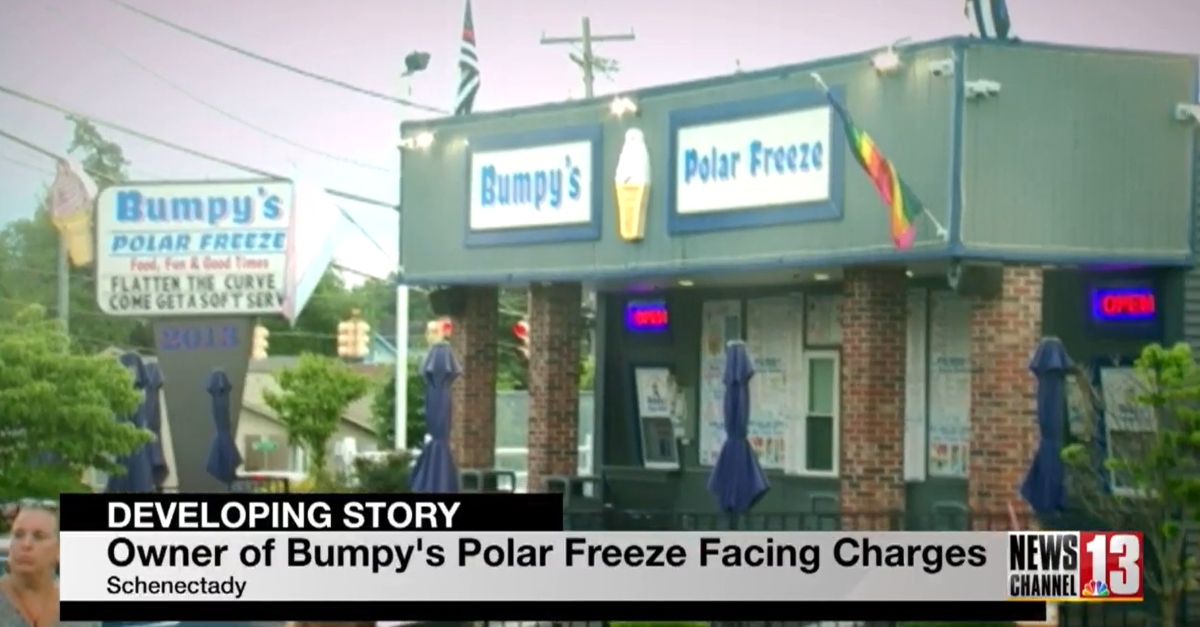 The former owner of an ice cream parlor in Schenectady, New York is now facing a civil lawsuit from the New York State Attorney General’s Office after being accused of making racist threats against protesters and falsely calling 911 against them. The lawsuit asks a judge to order that David Elmendorf cannot possess weapons, such as an air rifle, within 1,000 feet of protests — among other things.

“Those who make racist and violent threats will be held accountable by my office with the full weight of the law,” said Attorney General Letitia James (D) in a statement obtained by Law&Crime. “The charges against David Elmendorf should serve as a warning that hate crimes will not be tolerated on my watch and we will not allow any individual to use the color of someone’s skin as a weapon. Today, we are utilizing new authority, for the first time, to bring charges against an individual who filed false, race-based police reports. We must continue to remain vigilant against hate and bias in our communities, and I encourage anyone with information about a potential hate crime to contact my office.”

The case stems from a controversy over Elmendorf’s business, Bumpy’s Polar Freeze. Texts circulating online allegedly showed Elemendorf using racial slurs and asserting he did not hire Black people. Protests ensued. Things escalated; 911 was called over reports of a man threatening protesters with a firearm. Police arrested Elmendorf for carrying a pellet gun, which was identified in the new complaint as a .22-caliber air rifle. The criminal case is ongoing.

In the lawsuit, James’s office said that the ice cream parlor owner had threatened a group of Black protesters who were peacefully standing on the porch of a nearby home during the June 30, 2020 incident. From the civil complaint:

Elmendorf allegedly called 911 and lied by saying that there were 20 armed protesters nearby who threatened to shoot him. He called the Black protesters “savages” who hung out in “Section 8 housing,” according to court papers. Cops arrived and interviewed witnesses who stayed at the home in question. No one was arrested.

In the wake of news about the statements, Schenectady County Attorney Chris Gardner asked that New York Attorney General Letitia James investigate the defendant for possible civil rights violations, according to The Daily Gazette.

Elmendorf attorney James Mermigis denied the racism allegations in a phone interview last year. He told Law&Crime that every Bumpy’s employee on shift during the protest march was Black. He maintained that Elmendorf was acting in self-defense to protect a friend being beat up by five to seven guys, one of whom brandished a gun.

Mermigis once again rejected the bigotry claims, and said that Schenectady County Attorney’s Office was out to get his client over ongoing litigation.

“My client categorically denies these awful allegations,” he wrote in an email to Law&Crime on Wednesday. “My client is not a racist and 75% of his employees over the last 5 years were minorities. Schenectady County Attorney’s office leaked unverified Facebook posts and/or messages to the Attorney General’s office. Schenectady County is out to get my client due to the ongoing litigation between the County and my client. The County never verified these messages or even bothered to conduct an investigation as to whether they were true or false. My client believes that once the evidence comes out, he will be vindicated.”