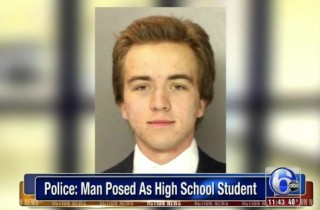 Stephayne and Michael Potts, the couple who took in Artur Samarin, the person they thought was a high school-aged boy but is allegedly 23, are speaking out. They addressed the media for the first time on Wednesday, and dropped quite a bomb. In an interview with Pennsylvania’s WPMT, Stephayne Potts said that Samarin, who went by “Asher Potts” while attending a Harrisburg high school for nearly four years, was planning an attack on his classmates and teachers.

“He made comments about other shootings, and he told us that everyone would know his name. He said his name would be the biggest in the world,” she said. Stephayne also said Artur would discuss specific kids he wanted to hurt, and talked about blowing up the school. The Pottses claim they contacted the FBI in November 2015 after hearing these threatening remarks. It is unknown at this time if their report to the FBI led to Samarin’s February arrest.

Samarin’s attorney, Adam Klein, says the couple is lying. Klein says his client was an upstanding student, and Stephayne Potts “is trying to paint herself as the victim. One would only need to look at her criminal history to see she is a con artist.” According to WPMT, Stephayne and Michael Potts are defendants in 20 landlord/tenant and civil lawsuits. The Pottses say they are broke after spending over $42,000 on those cases. They say they’ve spent most of their remaining money on “Asher.”

Stephayne and her husband met Samarin in the summer of 2012, she told reporters. At the time, Samarin was in an international work program with other Ukrainian students. Samarin told them that he was getting beat up by the other students, and that September, the Pottses took him in and enrolled him in school. Samarin later took the name Asher Potts, although the couple never adopted him. They knew he was in the country illegally after his visa expired, and they planned on getting him legal status after he turned 18. They insist they had no idea he had already reached that age. In fact, Stephayne still doesn’t believe Samarin is 23. “We watched him go from high pitched tones to the way he speaks now. ”

Samarin is currently in jail on charges of identity theft, theft, and tampering with public records for the alleged fraud. He is also facing sexual assault charges for a relationship he allegedly had with a 15-year-old girl in 2014.