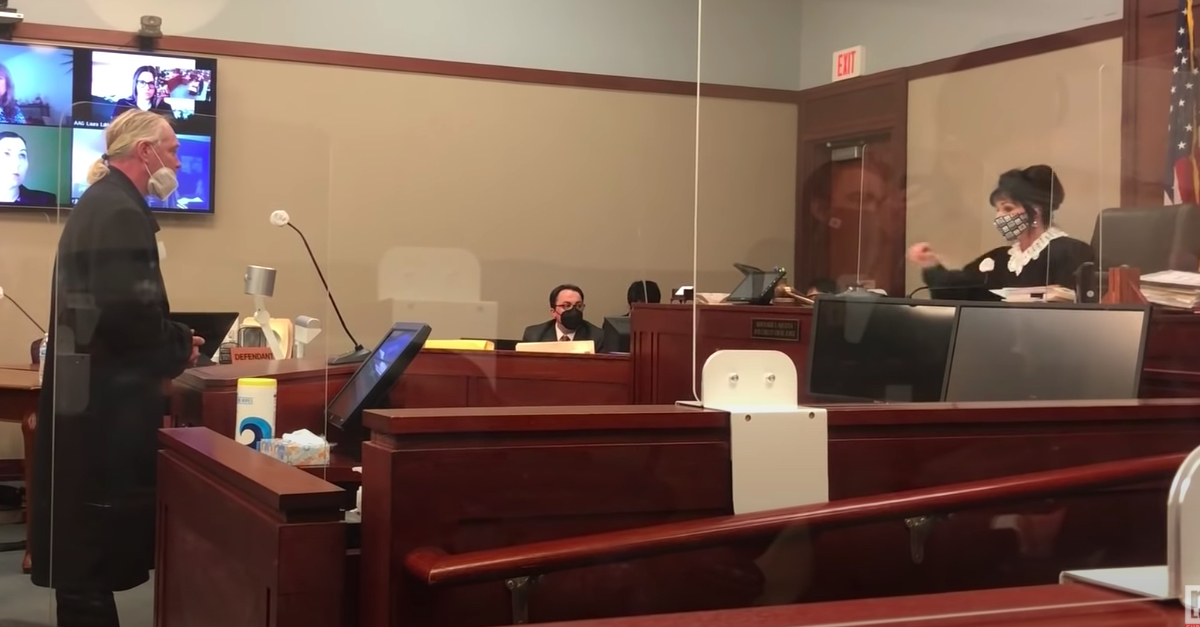 A Michigan judge on Friday ordered the arrest of a man who planned to provide legal representation to a defendant charged with flouting pandemic restrictions because the man wasn’t licensed to practice law in Michigan or any other state.

Martin had previously filed documents with the court indicating that he would be appearing as “assistance of counsel” for Marlena Pavlos-Hackney despite having no formal legal education whatsoever.

The phrase is an apparent reference to the Sixth Amendment.  Martin’s group says that’s the real term lawyers should go by.

“Note: the Constitution refers to lawyers as ‘Assistance of Counsel’ in Amendment 6,” his website reads.

Pavlos-Hackney, the owner of Marlena’s Bistro and Pizzeria in Holland, Mich., was arrested after repeatedly ignoring several cease and desist orders and refusing to comply with state’s dine-in ban.  According to a report from local news outlet MLive.com, Pavlos-Hackney was taken into custody early on Friday morning after she did not turn herself over to authorities on a bench warrant issued earlier in March.

But before Aquilina was able to delve into the restaurant owner’s case, she had to deal with Martin, the founder of the Texas-based Constitutional Law Group (CLG).

Based on its website, CLG holds itself out as “a group of Constitutional Lawyers that are experts in Constitutional Law who wisely and forcefully defend The People of the United States of America regardless of their ability to pay.”

But CLG appears to be little more than a quasi-religious organization that employs or is connected with few, if any, formally trained or licensed attorneys.  The various individuals listed under a “Law Advisors” section of the group’s website have professional titles ranging from “insurance agent” to “entertainer,” “business man” to “inventor,” and “controversial international entrepreneur” to “radio talk show host.”

“The Constitution Does Not give ‘We the People’ Our rights; Our Creator does,” Martin says online.

On his own LinkedIn page, Martin lists his occupation as a “constitutional lawyer” as well, though he adds a bit more context in the “About” section of his website.

“I am not a ‘B.A.R. ATTORNEY’ who first duty is to the court; I’m a Constitutional Lawyer with over 30K hours of Law Study and courtroom experience,” Martin’s web page reads.

The abbreviation — “B.A.R.” — is a direct reference to a conspiracy theory against lawyer regulation laws.

“I am fearless and wise when it comes taking care of my clients,” Martin continues. “I go after corrupt clerks posing as so called judges, prosecutors and law enforcement office who violate the public trust and ‘Our’ September 17th, 1787 Constitution for the united states of America.”

Judge Aquilina would have none of it. According to local outlet UPMatters, Martin tried to claim he only filed paperwork to represent Pavlos-Hackney to provide assistance under the “Sixth Amendment” of the U.S. Constitution because “she does have problems understanding the English language.”

“Sir, apparently you have problems with the English language,” Aquilina replied, noting that Martin had clearly claimed he was “assistance of counsel” in the documents filed with the court. “There is no other definition,” she added before ordering the bailiffs to escort him out of the courtroom.

His online bio also refers to him as “The Judge Slayer.”

The State Bar of Michigan’s website contains lengthy resources about the unauthorized practice of law.

The applicable regulation which bans the unauthorized practice of law is here. It reads, in part:

A person shall not practice law or engage in the law business, shall not in any manner whatsoever lead others to believe that he or she is authorized to practice law or to engage in the law business, and shall not in any manner whatsoever represent or designate himself or herself as an attorney and counselor, attorney at law, or lawyer, unless the person is regularly licensed and authorized to practice law in this state. A person who violates this section is guilty of contempt of the supreme court and of the circuit court of the county in which the violation occurred, and upon conviction is punishable as provided by law.

Lawyer licensing laws are basically consumer protection regulations.  They are designed to ensure that individuals who choose representation end up obtaining effective and competent assistance.

Watch the testy exchange below: