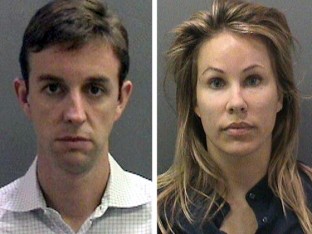 An Orange County, CA jury has awarded a $5.7 million verdict against Kent Easter and Jill Easter — both lawyers — who planted drugs on the PTA president of their child’s school in retaliation for a comment they mistook as an insult against their child’s intelligence.

The dispute began back in 2010 at the Plaza Vista School in Irvine, CA.  According to trial testimony, Jill Easter became angry when her child was not out in front of the school when she came to pick him up and demanded answers.  The school’s former PTA president, Kelli Peters, testified that in an attempt to explain the child’s tardiness she told Easter her son “may have been slow to line up,” and it was this comment — which the Easter’s misinterpreted as an insult against her child’s intelligence — that sent them off the deep end.

Apparently unsatisfied with the results of a nearly year long campaign to smear Peters reputation and have her banned from volunteering at the school, in 2011 the Easter’s devised a truly devious plan to avenge their son’s honor.  The Easters planted prescription painkillers and marijuana in Peters’ vehicle and then Kent Easter, using a false name and accent, called the police to report seeing Peters driving erratically in the school parking lot.  Officers arrived and discovered the planted drugs during a search of the car and placed them on the hood of the vehicle in view of everyone at the school.  The humiliated Peters was detained and questioned for nearly three hours before police were able to determine that the drugs were indeed planted.

During the civil trial, Kent Easter finally admitted his role in the deceitful plot, calling his actions stupid and unfortunate.  Any chance that he might garner some sympathy for admitting his role, however, was quickly undone when he then testified that Peters’ was exaggerating her suffering in an effort to gain a financial reward.

After the verdict, Peters and her attorney said the Easters have never shown remorse for their actions.

“This was really not about money, this was about standing up to people that pick on other people and telling them it’s not OK to do this,” Peters said. “I feel like justice has been served.”

Kent and Jill Easter, now divorced, were also both charged criminally and convicted of felony false imprisonment in 2014.  Kent Easter had his law license suspended and served 87 days in jail, while Jill Easter served 60 days in jail and was disbarred.