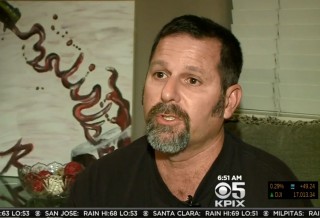 In what might be the most egregious abuse of the court system, a home intruder filed a lawsuit against a San Francisco man after being shot.

“This is my biggest issue, our judicial system allows these people to have right to try to sue,” Joe Balistreri told KPIX 5, adding that he is now struggling with mounting legal bills. The incident happened back in March 2012 when Balistreri was spending the night at his parent’s home.

“I heard the noise coming from the front door. I heard clicking, rattling of the door handle. I woke up my father, told him someone’s trying to break in your house, where’s your gun?” Balistreri told the television station. He says the home intruder entered his parent’s house through the garage. After coming face-to-face with the very tall man and fearing for his safety, Balistreri said he fired three shots.

The home intruder claims he was just drunk and accidentally stumbled into the house. The judge sided with Balisteri, but the man launched a GoFundMe page to help pay for the lingering legal costs.  No charges were ever filed in case.

[h/t and screengrab via KPIX]