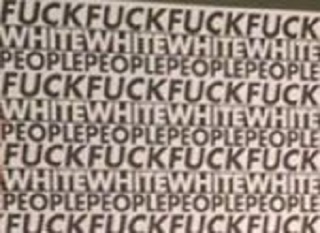 An art display featuring the phrase “Fuck White People” has drawn controversy, but was ruled as not being hate speech in a recent decision. The exhibit, at the South African National Gallery in Cape Town, was said to not violate the country’s generally broad hate speech laws because it was considered political.

The court allowed the exhibit, saying it did not target all white people, but rather was in the same vein as the messages of activists Nelson Mandela and Albert Luthuli, taking on the oppression of “white domination.”

At first glance, that might seem like a distinction without a difference, the decision is supported by the fact that the artist, Dean Hutton, is white.

“My work is an amplification of the words and intellectual labour of black people who have been critiquing white people’s actions for hundreds of years,” Hutton said to South Africa’s News24. “When black people talk, we white people must listen and learn.”

The case against Hutton and the exhibit was brought by Jack Miller, leader of the Cape Party. “This court case,” Miller said, “was about ensuring that the laws of the country are balanced and applied equally to everyone, that it protected minority rights, and ensured common respect and decency between our many different cultures and races.”

Miller’s party was caught vandalizing the exhibit in January, placing a sign that said “Love Thy Neighbor” over it.

no person may publish, propagate, advocate, or communicate words based on one or more of the prohibited grounds, against any person, that could reasonably be construed to demonstrate a clear intention to-

(b) be harmful or to incite harm;

The law provides an exceptions including for “bona fide engagement in artistic creativity.”

George Washington University Law Professor Jonathan Turley criticized the legal standard, saying that it results in an odd situation where some offensive speech is legally declared proper while other speech isn’t. “You end up, as in this case, distinguishing between profane attacks on races as either elevating political statements or racist screeds,” Turley wrote in a blog post. “There is an alternative. It is called free speech where you let good speech drown out bad speech.”