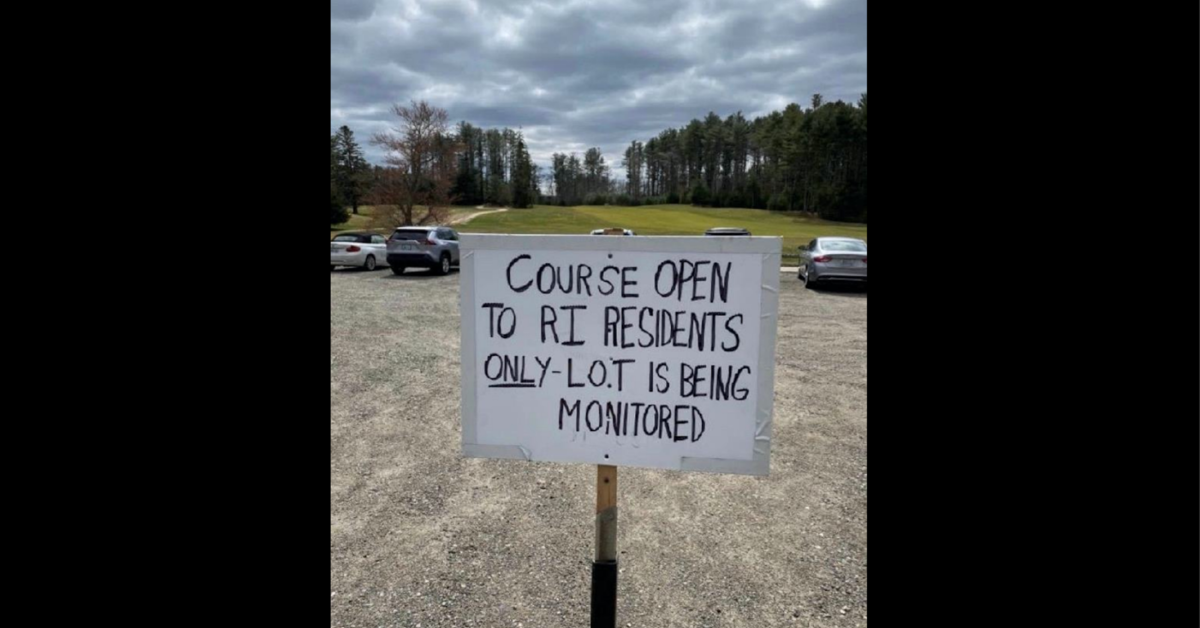 A trio of Massachusetts golfers have aptly earned their state’s preferred pejorative demonym with a day out on the links.

Amid the novel Coronavirus (COVID-19) pandemic engulfing every corner of the globe, the three misdemeanor-accused men decided it was a good time to golf–in violation of a state-issued quarantine order in Rhode Island, according to the Richmond Police Department.

Richmond Police Chief Elwood Johnson said the men were initially spotted by workers at a local McDonald’s who saw the men move their golf bags and other gear from cars with Massachusetts plates to another car with Rhode Island plates.

The alleged green fiends initially parked at the McDonald’s before getting a ride to the Meadow Brook Golf Course from a Rhode Island resident, authorities said.

“Any person coming to Rhode Island from another state for a non-work-related purpose must immediately self-quarantine for 14 days,” the March 28 order reads.

“Not too far away you have health care workers that are falling ill and dying trying to keep the rest of us alive and here you have people taking advantage of the system just to beat it and play golf,” Johnson told local NBC affiliate WJAR on Thursday. “It certainly deserved to be charged. It was clear they had circumvented the quarantine to get to the golf course by way of a Rhode Island vehicle and play in violation of the quarantine order.”

“The officers observed this same Rhode Island vehicle return approximately five hours after the cars had been left and saw three men get out and remove golf clubs from that vehicle,” Johnson added. “They approached the men, spoke to them, identified them.”

According to Johnson, 51-year-old Gregory Corbett, 22-year-old Tyler Pietrzyk, and 22-year-old Nye Cameron were charged with petty misdemeanors for the alleged violation of the state’s quarantine directive.

The press release alleges the golfers “knowingly circumvented the State’s quarantine order for out-of-state residents traveling into RI for non-work purposes. It should be noted that since this quarantine order took effect on Monday, March 30th, the golf course reopened after erecting visible signage informing the public that the course was open to RI residents only,” the release continues.

Authorities say that out-of-state golfers are a distinct problem:

Last Saturday, the Richmond Police Department received a number of calls from concerned citizens about the dramatic increase in out-of-state residents visiting golf courses in town, after the State of Massachusetts ordered all their golf courses closed last week. Since the above incident yesterday, public golf courses in Richmond are now requiring golfers to present valid identification verifying state residency.

“It’s not the most heinous offense, but the reality is that we’re living in a whole different world this month and it’s important we all follow the rules to keep one another safe,” Johnson added.