NYPD Criticized by Lawmakers for ‘Beating Up Tenants,’ ‘Violent Response’ to Anti-Eviction Protest 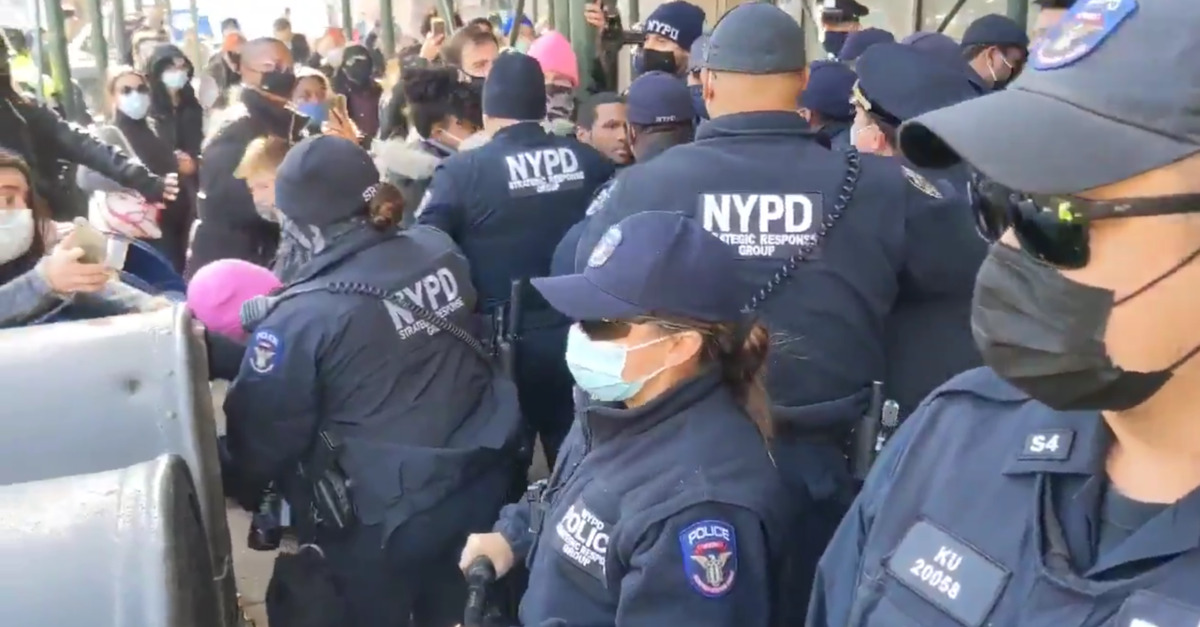 A group of New York City Police Department (NYPD) officers was accused of “beating up” tenants and tenants rights activists on Friday amidst an anti-eviction protest in Downtown Brooklyn.

In a viral video shared by New York City Council candidate Michael Hollingsworth, a dozen-plus members of the NYPD can be seen pushing and shoving a group of activists roughly the same size.

“Shame!” a male-sounding voice off-camera says repeatedly. “Shame on all y’all. Get the fuck out of the way of justice and progress.”

Many of the people at the front of the activist group attempt to surge forward but are quickly repelled by law enforcement with varying degrees of force. Near the end of the clip, a young woman can be seen stepping directly in front of an officer. She appears to complain that the officer “lives behind [her]” as the young woman’s hands animatedly punctuate the point. Two of her peers then move to restrain her and stop the confrontation from escalating.

The video itself is brief, hectic and begins in the middle of a standoff between the tenants and activists on one side and the NYPD on the other.

The specific contretemps occurred outside of the Brooklyn Housing Court after several activists attempted to interrupt, disrupt or otherwise stop a tenant from being evicted.

Multiple arrests in Brooklyn today. Arrestees were attending an anti-eviction demonstration at the Brooklyn housing court. Heard cops trapped demonstrators inside a building and assaulted an older woman matching the description of a protest photojourno who has an NYPD press badge pic.twitter.com/PzA5KnRWzh

Many angry denunciations erupted after the video was posted on Twitter–faulting the officers for following orders to evict tenants amidst the worst pandemic in modern times.

Various elected officials in New York responded to the footage with outrage.

“The violent response from NYPD officers toward people who were trying to protect a tenant from being evicted during a pandemic demonstrates that private property is prioritized at the expense of people’s lives and safety in our city,” New York State Sen. Julia Salazar, a Democrat who represents part of North Brooklyn, told Law&Crime.

“This confrontation between tenants and police could have been avoided if the previous eviction moratorium were maintained,” the Bushwick Democrat continued. “But because of the failure to enact a true moratorium on evictions, legal evictions are now proceeding again, threatening to make vulnerable people homeless in the middle of an economic and public health crisis. This underscores how urgent it is for the legislature to reconvene and immediately pass legislation to implement an eviction moratorium without loopholes.”

“Spectacular violence like this is intended to dissuade the public from resistance,” recently elected New York State Assembly Member Zohran K. Mamdani, who represents Queens, said via Twitter. “But tenants will not be moved. If [Governor Cuomo] wants more of this, we’re prepared for direct action at evictions [and] housing courts across [New York] until he restores the moratorium. Solidarity forever.”

“Housing is a human right,” he said in a message to Law&Crime. “We need to end evictions with an immediate moratorium. What happened on Court Street is another example of inappropriate use of police force.”

Several arrests were made during the anti-eviction protest, according to Hollingsworth and others on the scene. The city council candidate identified one of the arrested activists as an 80-year-old-woman and grandmother.

Katelin Penner, with Stop Evictions NYC, an eponymous group that has recently come to prominence amid the still-raging coronavirus (COVID-19) pandemic and the spiraling political ripple effects, said she was “disgusted.”

Law&Crime repeatedly reached out to the NYPD for comment on this story but he NYPD’s Office of the Deputy Commissioner for Public Information declined to comment over the phone and instead directed media inquiries to an email address. No response was forthcoming at the time of publication.