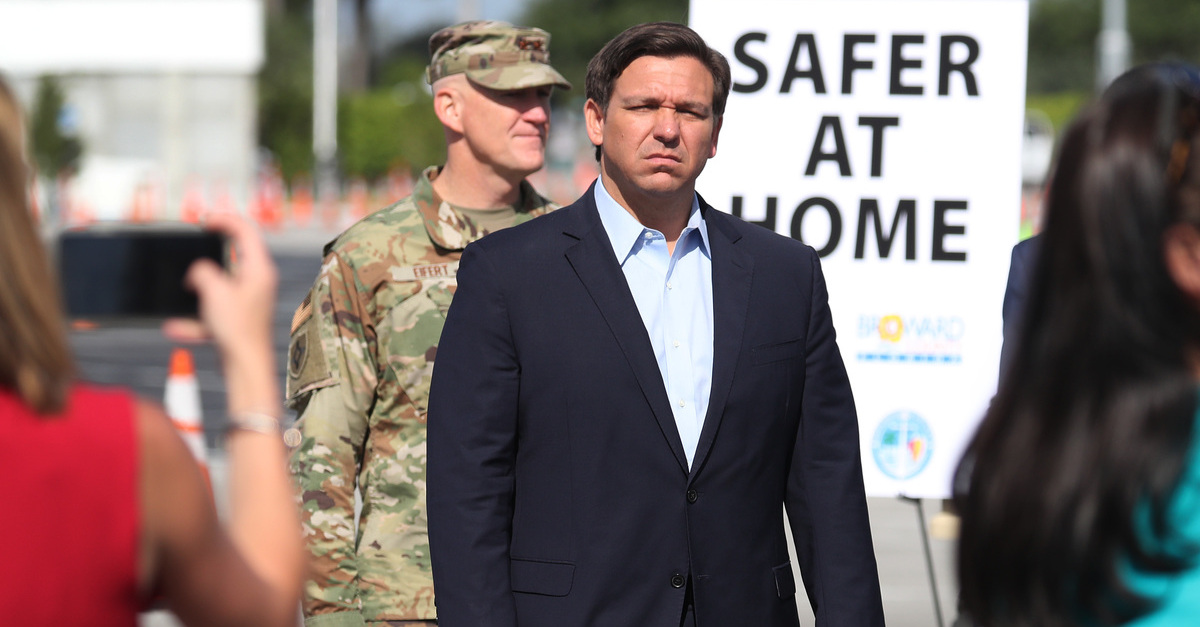 A former attorney is suing Florida Governor Ron DeSantis (R) over pandemic restrictions that wiped out his two latest jobs working as a substitute teacher and as an employee at a restaurant in North Palm Beach, according to a petition filed earlier this month.

Rhetorically blistering, the lawsuit evokes familiar themes of frayed liberties and the words of one of the nation’s Founding Fathers in order to advance a decidedly minority viewpoint regarding the necessity of regional lockdown measures intended to maintain public health and stop the spread of the deadly contagion.

The filing’s conclusion reads, in part:

Businesses are free to remain closed or require social distancing. Local school boards are vested with the authority to continue “distance learning.” Major league sports can play in empty stadiums. Citizens are free to remain in their homes. If we allow Respondent to, in essence, make things up as he goes along, we have tyranny. In the words of Benjamin Franklin “Any society that will give up a little liberty to gain a little security will deserve neither and lose both.”

William Abramson voluntarily surrendered his law license in June 2019 for a period of five years in order to avoid a drawn-out battle over allegations of impropriety and potential lifelong disbarment. Since then, he worked at the Cucina Cabana restaurant and with a local school district–but both sources of income recently evaporated.

On May 5, Abramson sued DeSantis in his capacity as governor over what he argues are violations of the “United States Constitution, the Florida Constitution, as well as Florida Statute 252,” a disaster relief law passed in the aftermath of a devastating hurricane season that ravaged the Sunshine State in the early 1990s.

“Florida Statute 252.311 was enacted in 1993,” Abramson’s lawsuit notes. “No legislative history exists for this statute. Its a well known and accepted fact that Florida was not prepared for Hurricane Andrew, which occurred in August, 1992. The entire purpose of this statute is to facilitate the opening of the State, not closing it.”

The one-time attorney claims the governor overstepped his bounds and directly contradicted the intent of state law by issuing those orders to enforce lockdown restrictions on local businesses.

“The Executive Orders have no basis in law,” the lawsuit continues. “[DeSantis’s] unilateral and arbitrary nature determining what is ‘essential’ and what isn’t is a dangerous precedent.”

Abramson also argues that DeSantis has failed to abide by the language of the statute in question.

Again the filing, at length:

If this statute was intended to cover the current situation, an emergency plan would have been developed,” the lawsuit alleges. “No such plan exists. The only conclusion is that this statute was never meant to apply to the current situation. Petitioner does not assert that every Governor, legislator, and employee of the Division, since 1993, is an abject failure. Quite the contrary. Florida’s response to hurricanes since Andrew has been exemplary. Florida Statute 252 simply does not authorize Respondent to issue Executive Order 20-111 and 20-112, as well as the previous order under the facts of the current situation.

“A cursory review of Executive Orders 20-211 and 20-212 reflect the failure to address the current situation in the state’s emergency management plan,” the lawsuit goes on. “Therefore, Respondent and every elected official have failed the people of the State of Florida or the statute was never intended to apply to the current situation. No other conclusion can be reached.”

Attorneys for DeSantis issued a 43-page legal rebuttal–calling for Abramson’s lawsuit to be swiftly dismissed or for the state’s Supreme Court to quickly rule for the governor on the merits.

“This court should decline petitioner’s invitation to read such a restrictive view of the governor’s executive power and specifically his emergency management powers,” the response brief argues.

Abramson himself is sanguine about the possibility of a legal win.

“The Supreme Court is going to do what they’re going to do,” he told reporters Steven Walker and Lauren Johnson. “I’m just getting the wheels in motion and getting the idea in front of them that this could be wrong. They could either do something about it or not.”

Despite sweeping heights of prose attacking the state’s response to the pandemic, the lawsuit also ventures a bit of sympathy–tightly cabined, however, in the need for a narrow reading of the statute in question.

“Petitioner does not seek to embarrass nor subject any government official to ridicule,” the complaint insists. “The sole purpose of this Petition is to restore the rights of all Floridians to live in liberty and exercise their rights as a free people, to freely assemble, and benefit from their industry. Petitioner is not unmindful of the pressure and responsibility of being [DeSantis]. However, the rule of law must prevail.”

“I get it. You should stay home. But don’t tell me that my restaurant should have to close,” Abramson told Law360’s Nathan Hale earlier this month. “It’s America, we fought for this.”