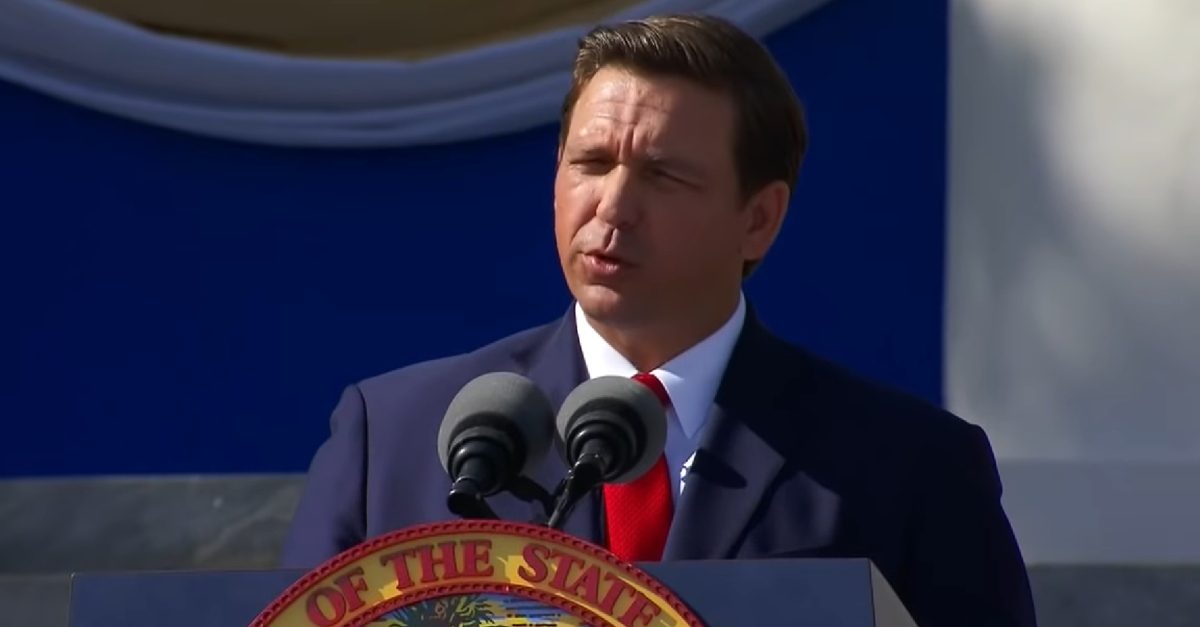 Florida’s Republican governor Ron DeSantis (R) was accused of violating the state law Saturday when he barred journalists from both the Miami Herald and Tampa Bay Times from attending his afternoon coronavirus press conference.

“[Gov. Ron DeSantis] decided to violate the state’s public meeting laws and chose to exclude the Miami Herald and [the Tampa Bay Times] from a media briefing at the Capitol,” she wrote. “He was so determined to keep us out, he had a [Florida Department of Law Enforcement] vehicle pick up TV reporter Mike Vasilinda to give him back door access.”

.GovRonDeSantis decided to violate the state's public meeting laws and chose to exclude the @MiamiHerald and @TB_Times from a media briefing at the Capitol. He was so determined to keep us out, he had an FDLE vehicle pick up TV reporter Mike Vasilinda to give him back door access

Klas also said that when another reporter – Jim Turner of New Service Florida (NSF) – attempted to reason with DeSantis’s media team, he was told that if he continued to argue with them, he, too, would be prevented from attending the press conference. Klas posted a video of Turner talking on the phone about the encounter.

“If I insist on Mary Ellen [Klas] coming in I have to watch on live screen,” Turner can be heard saying. Seconds later a car pulled up. Klas said that vehicle was going to escort Vasilinda to the governor’s press conference.

According to the Florida First Amendment Foundation, the state’s Sunshine Law gives the public an “inalienable right to be present and to be heard” at public meetings, such as the governor’s press conference. While the government is permitted to place restrictions on the parameters of the public’s access, such restrictions are generally limited to requiring orderly behavior and allowing for the orderly progression of public meetings, such as limiting the amount of time an individual can speak during the event.

Klas insinuated that she was kept out of the governor’s press conference due to her news organization’s recent reporting on the COVID-19 pandemic, reporting which has been critical of DeSantis for failing to close the state’s beaches during spring break.

UPDATED | St. Johns County beaches were finally closed on Saturday at 6 p.m., after a day of controversy in which the county was the object of scorn on social media after images of packed beaches made the Internet rounds.

Klas went on to post several of the questions she would have asked DeSantis had she been permitted into the press conference.

You said you were going to be transparent throughout this process, why have to refused to disclose the nursing homes that have had COVID positive cases, except the one you considered negligent? /

Asking for a friend: Did any of the reporters given exclusive access to the @GovRonDeSantis press conference ask why the governor has excluded @MiamiHerald and @TB_Times ?

After we urged @GovRonDeSantis to put social distancing measures in place at his press briefings, the administration responded by excluding @TB_Times @MiamiHerald joint Tallahassee bureau from today's press briefing.

“Often, 25+ reporters are crammed into a tiny room for his briefings,” Mower said. “Now he’s excluding us and other news outlets from his briefings.”

So, was this controversy related to compliance with social distancing guidelines?

The Miami Herald said that DeSantis spokeswoman Helen Aguirre Ferré said as much but did not explain why Klas was excluded:

Helen Aguirre Ferré, DeSantis’ chief spokeswoman, said in an email Saturday that a small group of reporters were invited to attend the briefing in an effort to respond to requests for social distancing. She said she alerted a different reporter of the Herald/Times bureau but did not explain why Klas was not allowed to attend. Klas was already at the Capitol entrance when Ferré called Lawrence Mower of the Times.

Law&Crime reached out to the governor’s Communications Office for comment on the accusation that Florida law was violated. Ferré said the following in a statement:

In an effort to maintain social distancing as some media groups requested, including The Miami Herald, a small pool of Tallahassee reporters representing print, TV and digital were invited to attend a publicly available livestream-briefing with the Governor. As is customary, a media advisory of the livestream was sent to statewide media. A reporter from Tampa Bay Times/ Miami Herald was called but the reporter did not return the two calls. Every endeavor is made to ensure the public continues to have full access to information as the safety and security of Florida residents is our greatest concern.