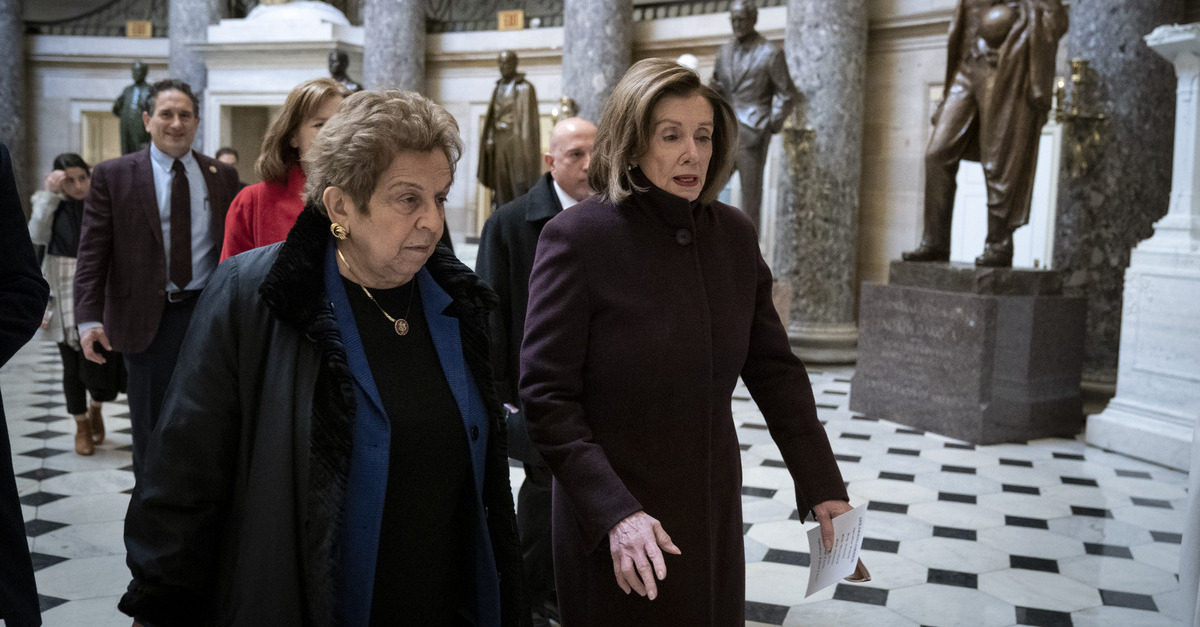 Only one Democratic member of Congress sits on the five person commission overseeing the controversial $500 corporate bailout package passed last month in response to the novel Coronavirus (COVID-19) pandemic. On Wednesday, she admitted to violating federal law related to stock disclosures.

Rep. Donna Shalala (D-Florida) was handpicked by House Majority Leader Nancy Pelosi last Friday as the lone elected Democrat on the bipartisan CARES Act oversight panel. In a press release announcing her decision, Pelosi said Shalala would make sure the half-trillion-dollar corporate slush fund would be “used wisely and efficiently.”

Critics, however, quickly noted a potential problem with Shalala at the helm. She appeared to be broadly and deeply invested in several companies queued up at the front of the line for the $500 billion slush fund set aside for huge corporations impacted by the pandemic.

The appearance of impropriety here was first noted by financial crimes reporter David Dayen in The American Prospect.

On Tuesday, Dayen reported that Shalala had actually divested from many of the stocks in question–but had apparently failed to file the necessary disclosures mandated by federal law. Shalala’s office initially responded to the controversy by lying about it.

Shalala spokesperson Carlos Condarco initially said: “the Congresswoman has filed all the necessary disclosures required under the STOCK Act.”

But that wasn’t actually true.

On Tuesday evening, Shalala’s office admitted that she had, in fact, violated the STOCK Act.

“She had a misunderstanding about the periodic transaction report process and her need to report the sale of these stocks while preparing a blind trust,” Condarco admitted in a statement to the Miami Herald. “As a new member with a broker and attorney who were not familiar with the congressional disclosure rules, there was a misunderstanding.”

Per the terms of that 2012 law, individual members of Congress are required to file disclosures of any and all stock sales or purchases “in no case later than 45 days after such transaction.” Those disclosures are made to the House and Senate Ethics Committees.

The Clerk of the House of Representatives is the authority entrusted to make sure that representatives’ disclosures become public record by releasing Periodic Transaction Reports. The upper chamber’s filings are administered by the Senate Secretary and Sergeant at Arms.

In each case, the process can be likened to yearly financial disclosure reports but STOCK Act reports are supposed to be filed in a much more timely fashion–within 45 days–assuming that any such qualifying economic activity occurs to trigger the law.

Shalala, however, has not filed a single such disclosure report with the House Ethics Committee.

“Not understanding disclosure is a pretty bad look for the member of Congress chosen to force disclosure out of the Treasury Department and Federal Reserve on its lending programs,” Dayen noted in a Wednesday update.

But Shalala admittedly violated the disclosure provision of the STOCK Act in a video posted to Twitter on Wednesday afternoon.

“It was my mistake and I take full responsibility,” she told Miami’s local CBS affiliate.

According to the Democratic Party’s lead bailout oversight official, she dumped her stocks immediately after being elected to the House of Representatives in 2018 and was aware of her obligations but decided against filing the necessary disclosures anyway.

“Look, I knew what the law was,” Shalala continued. “I missed the deadlines. And I have to take responsibility, personal responsibility for doing that. No one else is responsible except for me.”

Public Citizen’s Craig Holman told the Herald that the public disclosure requirement was effectively the heart of the law and that by ignoring those provisions, Shalala had robbed the public of the opportunity to hold her to account.

He went on to explain the STOCK Act’s importance:

The reporting requirement is exceedingly important. It’s perhaps the most important element of the entire STOCK Act. The reporting requirement gives the public and press a real-time view of stock trading activity by members of Congress. That type of disclosure would allow us to uncover what would appear to be insider trading for [North Carolina Sen. Richard] Burr and [Georgia Republican Sen. Kelly] Loeffler.

Pelosi, for her part, is sticking by her decision to name Shalala to the highly influential post–despite her acknowledged violation of federal law.

“Congresswoman Shalala has the Speaker’s complete confidence as she works to hold the Administration accountable to the taxpayer through the CARES Congressional Oversight Commission,” Pelosi spokesperson Drew Hammill told the press on Wednesday.

Pelosi’s office added that Shalala “has been working with the Ethics Committee to address this issue since she became aware of it.”