Larry Klayman Gets a Win for Cliven Bundy, Vows to ‘Protect’ Him from George Soros 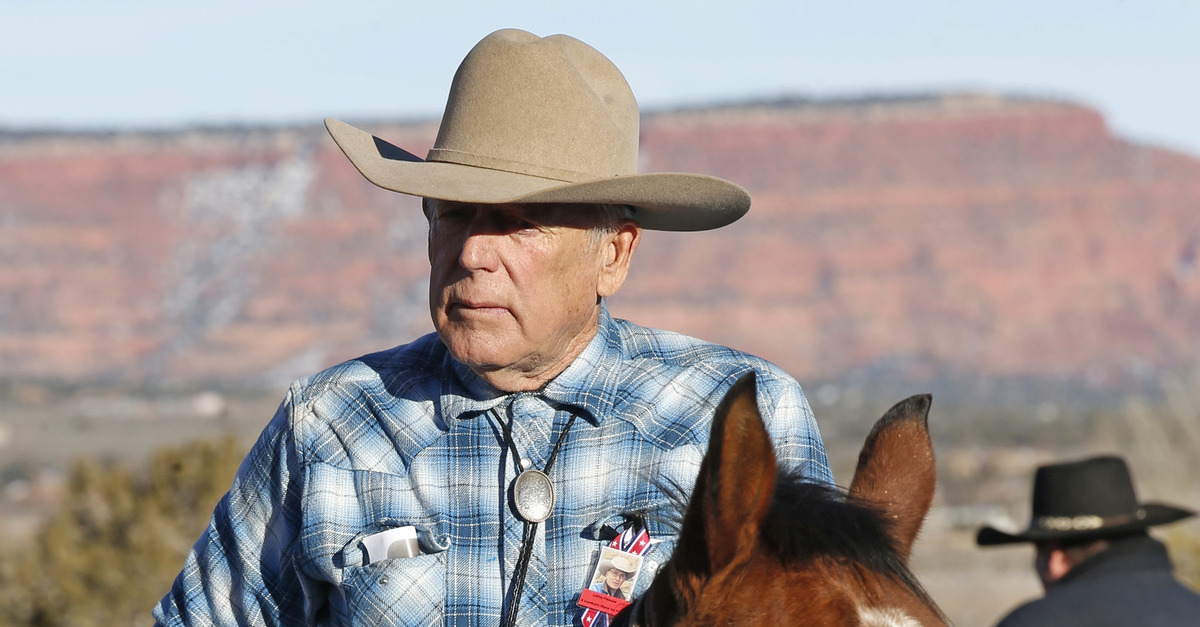 Infamous rebel rancher Cliven Bundy and two of his sons were granted complete vindication on years-old criminal charges by the Ninth Circuit of Appeals on Wednesday.

The charges stemmed from the widely-publicized standoff between the Bundys and several hundred right-wing militia members on one side and federal law enforcement operating under the cross-authority of the Bureau of Land Management (BLM) on the other.

Federal authorities alleged that Bundy had been unlawfully grazing his cattle on federal land for decades–by dint of failing to pay for permits and fees–and attempted to impound and sell off his cattle in order to settle those arrears–but the family and their supporters had other plans and weapons enough to see those plans through.

The opinion offers a capsule summary of the underlying issue:

On-site operations began the first week of April. On April 6, 2014, [one] of Bundy’s sons, Dave Bundy, blocked a BLM convoy on a state route and was arrested. The Bundys responded by inviting private militia groups such as Operation Mutual Aid, 3 Percenters Club, Freedom and Fighters, and Oath Keepers to come to their defense. The Bundys claimed that the government was taking their cattle and holding one of the Bundys prisoner, and had snipers in position surrounding the Bundy compound. Among those who responded was defendant Ryan Payne, who was a founder of Operation Mutual Aid. Hundreds of Bundy supporters, many heavily armed, poured into the area.

On April 9, 2014, Ammon Bundy led a mob to block a BLM convoy and was tased by officers. Payne used the incident to contact additional militia groups and solicit their help. By April 11, BLM had seized approximately 400 animals…

Quickly and “heavily” outnumbered, federal agents eventually ceded their ground and their painstakingly-planned law enforcement operation to the armed militias in an effort to avoid “bloodshed.” The impounded cattle easily made their way back to the Bundy family.

A slew of indictments followed and the trial began in late 2017. Before that trial began, however, the defendants filed a motion requesting any potentially exculpatory evidence. The prosecution summarily failed to provide such information until well into the trial itself.

The ruling documents some of the evidence initially withheld:

During the pretrial discovery phase, the defense had requested “all the threat assessments prepared in this case.” The government provided one threat assessment prepared in 2014. In its opening statement, the government had referred to a BLM decision to impound Bundy’s cattle in 2012. The government represented that BLM decided not to confront Bundy “because of the concern for violence.” During testimony, however, a prosecution witness mentioned a 2012 threat assessment, and recounted how the assessment concluded that Bundy posed no threat of harm. It then came to light that other threat assessments had been withheld—several of which had been prepared for a possible impoundment action in 2012. These assessments rated Bundy as having a low-to-moderate risk of violence. The government also produced new evidence regarding surveillance of Bundy’s home and the presence of armed officers. The new evidence was two Nevada Joint Terrorism Task Force reports.

Prosecutors had also withheld evidence concerning the placement of a camera on Bundy’s property, information about the government’s use of “snipers” and several Federal Bureau of Investigation (FBI) investigative reports known as FD-302s.

A mistrial was declared in late 2017 based on a Brady violation.

In 1963, the U.S. Supreme Court ruling, Brady v. Maryland, held that prosecutors must disclose any evidence in their possession that can help the defendant. Suppression of such evidence constitutes “a violation of the Due Process Clause of the Fourteenth Amendment.”

Judge Bybee summed up the situation: “Days into the Bundys’ trial, the government began disclosing information in its possession that, under Brady v. Maryland, was arguably useful to the defense and should have been produced to the defendants well before trial. As additional documents came forth, the district court held a series of hearings, eventually deciding that the trial could not go forward and that the indictments must be dismissed with prejudice.”

My client Cliven Bundy, having been forced to endure the emotional distress and physical harm of being arrested and denied bail, being thrown in solitary confinement for no valid reason, denied right of counsel and a speedy trial and then, after about two years of illegal incarceration, had to endure a sham and fraudulent trial, where exculpatory evidence was hidden, prosecutors lied to the presiding judge, and where a whistleblower came forward to disclose that there had been a ‘kill list’ by some agents of the Bureau of Land Management on the heads of the Bundys, is now relieved that this nightmare is over. As Cliven’s and the family’s lawyer I too am relieved that justice has finally been done.

The conservative attorney also used the opportunity to draw financier and billionaire liberal philanthropist George Soros into the controversy.

“However, there are forces of the left who still want to harm the Bundys, such as the Center for Biological Diversity, funded by George Soros,” Klayman’s statement continued, “I, for one, stand by my clients and will do everything in my power to protect them from these radical and hate filled leftist groups and forces.”

The district court can dismiss an indictment under its supervisory powers “(1) to implement a remedy for the violation of a recognized statutory or constitutional right; (2) to preserve judicial integrity by ensuring that a conviction rests on appropriate considerations validly before a jury; and (3) to deter future illegal conduct.”

Those “prerequisites” were met in Bundy’s case, the decision notes.