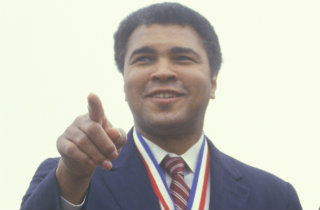 Stemming from numerous Freedom of Information Act (FOIA) requests, including one that led to a lawsuit, the FBI has started to release parts of its file on Muhammad Ali, who passed away in June. The legal action that served as the impetus for the release of the documents was filed in August by Judicial Watch, the conservative group best known for suing over documents related to the Hillary Clinton email investigation.

The Ali documents, which primarily concern Ali’s dealings with the Nation of Islam, were first distributed to Judicial Watch on November 21st before being added to the FBI’s website late Thursday. According to the most recent status report filed in the case, another batch from his file should be released around December 21st, with more to come a month later. Throughout, he’s referred to by his birth name, Cassius Clay, not as Muhammad Ali, the name he took when converting to Islam.

The FBI file itself notes that Ali was not technically the target of the investigation, but that didn’t stop the Bureau from closely monitoring him. The 141 pages of records shows agents being on top of anything that had to do with Ali’s connection to the Nation of Islam. For example, when Ali placed an order with A.G. Meier Uniform Company for a Fruit of Islam (the Nation’s “paramilitary” group) captain’s uniform, that was the subject of a memo.

“Chicago would contact its NOI sources in an effort to determine if Clay actually holds a position of authority in the NOI or if he has merely been given an honorary title,” the note read, “so Louisville, office of origin in this matter, could give consideration as to whether or not Clay should be considered for the Security Index.” The FBI soon determined that it was just an honorary role, in part because the Nation felt felt Ali “needs much more discipline than he presently possesses to be a satisfactory Muslim.”

Both Ali’s divorce from his first wife, Sonji, and his objection to the draft for the Vietnam War, were considered “leads” by the FBI. “The Louisville Office is requested to follow the draft status of CASSIUS CLAY bearing in mind the possibility he may claim a C.O. [Conscientious Objector] status and a possible trial may issue in the event he is found eligible for the draft,” a note reads from January 7, 1996. It continues by adding that “The Miami Office is requested to follow the divorce action between CASSIUS and SONJA [sic] CLAY, with particular emphasis being placed on any NOI implication being brought into this matter.”

In practice, many of the memos surrounding the divorce deal  had nothing to do with the Nation of Islam. Similarly, the most detailed and important memos contained in the documents released so far have few to no direct ties to Ali. But that kind of investigation was typical of the FBI under J. Edgar Hoover, who had the Bureau investigating actor Rock Hudson and others for matters as nebulous as “homosexual activity” at the time.