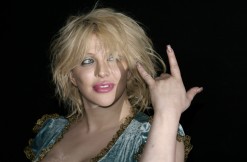 Courtney Love didn’t actually libel a former lawyer, according to a California appeals court Monday. This decision upholds a Jan. 2014 victory, the first time an American had gone to trial over an allegedly defamatory tweet.

It used to be that Love hired plaintiff Rhonda Holmes as an attorney. This was back in 2008. See, she thought people had been defrauding her, her daughter, and her late husband’s estate of millions of dollars, according to the court opinion. After a whole lot of conflict, Love fired Holmes. Or might have been Holmes who quit. They couldn’t agree on who dropped who.

Here’s comes the “defamatory” comment. When asked about Holmes, Love wrote a 2010 tweet that, “I was f—king devastated when Rhonda J. Holmes, Esquire was bought off” from representing her.

And there we go: lawyer sued musician. It was alleged Love meant that Holmes had been bribed to dropped her as a client. A hell of a thing to write about a lawyer. But the appeals court didn’t think it was enough to pin her on libel.

“The jury [in the court trial] found that although [Love’s] Twitter statement was false and tended to injure Holmes in her profession, Cobain did not act with actual malice,” the appeal judges wrote. They say Holmes failed to prove that Love knowingly made a false statement.

Love has been a musician since the early 1980s, but she’s best known as the widow of grunge rock icon, Kurt Cobain, who died by suicide in 1994. This isn’t even her first dance with a defamation suit. She reached a settlement with fashion designer Dawn Simorangkir in 2015 after Love blasted her on Twitter. (Guys, stop with the angry tweets.)