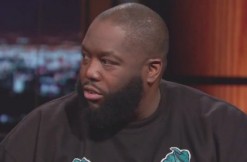 Not a hip-hop fan? Very well. But you still probably know Michael Render, aka Killer Mike, from that time he interviewed Bernie Sanders, who he’s supporting for the U.S. presidency. Now the hip-hop artist is speaking out on social media against sexual violence after a PR firm he hired was embroiled in a scandal.

Musician Amber Coffman alleged Heathcliff Berru, of Life or Death PR and Management, sexually assaulted her at a bar. This prompted more women to step forward, saying Berru did similar things to them. Sounds familiar to Bill Cosby.

In the fallout, Mike, one of Berru’s clients, went on Facebook:

Now that I’ve got everything in order, let me put this out here since my tweets didn’t convey my points/actions…

“Men have to be able to tell our friends and peers when they’re wrong,” he wrote. “We cannot just say, it’s not my problem. We can’t expect people to improve if we’re not willing to hold them accountable and push them to be better.”

So Mike found a new publicist. No charges against Berru have been reported, but he resigned from his firm within hours of the allegations.