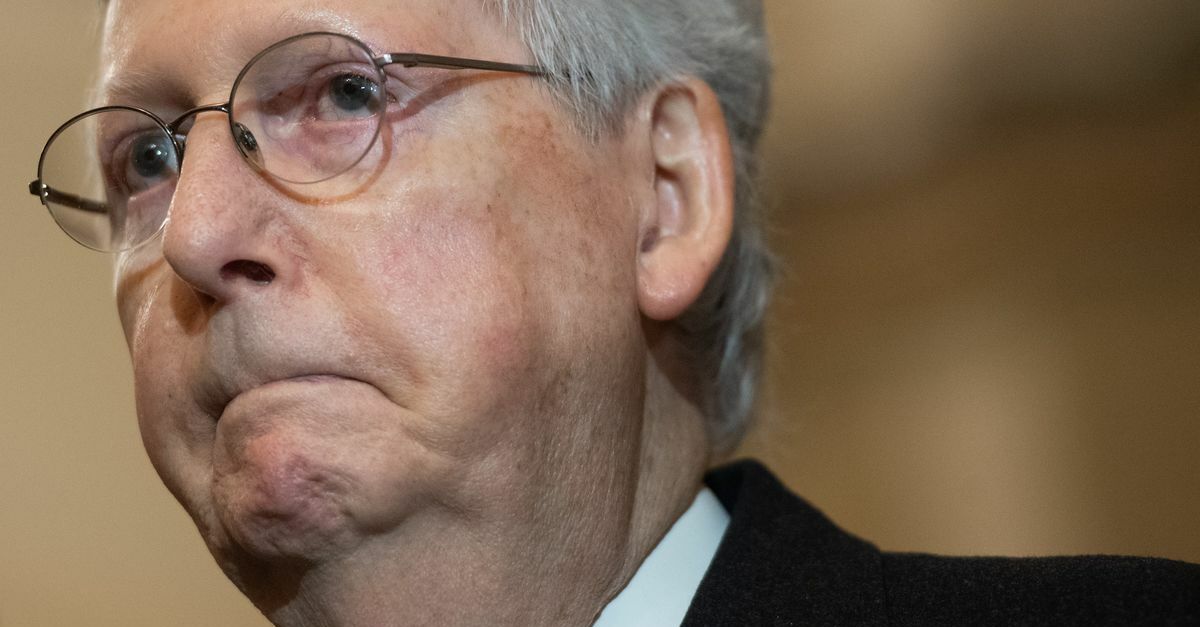 President Donald Trump has been impeached by the House of Representatives. Now it’s up to the Senate to acquit or convict him. A conviction would result in Trump’s immediate removal from office and the ascension of Vice President Mike Pence to the presidency. An acquittal would result in a lackluster end to the impeachment process–an outcome promised; some might say preordained–by Senate Majority Leader Mitch McConnell (R-Ky.).

That is, if the Senate actually gets its hands on the two successful articles of impeachment passed against the 45th president.

House Majority Leader Nancy Pelosi (D-Calif.), however, was expressly noncommittal as to the ultimate fate of those somber indictments immediately after Wednesday’s historic vote.

The issue with sending those articles over? The GOP-dominated Senate’s refusal to call witnesses and the sense, all-but confirmed by McConnell and other Republican senators, that the fix was in.

“That would have been our intention,” Pelosi told an assemblage of reporters–referring to her constitutional prerogative to transmit the articles to the Senate, “but we’ll see what happens over there.”

I don’t think [the Founding Fathers] suspected that we could have a rogue president and a rogue leader in the Senate at the same time. The next thing for us will be when we see the process that is set forth in the Senate, then we’ll know the number of managers that we may have to go forward and who we will choose. That’s what I said last night, that’s what I’m saying now.

Republicans were quick to grumble and grouse.

“If House Dems refuse to send Articles of Impeachment to the Senate for trial it would be a breathtaking violation of the Constitution, an act of political cowardice, and fundamentally unfair to President [Donald Trump],” complained Sen. Lindsey Graham (R-S.C.).

But for each instance of the GOP’s upset feelings about Pelosi’s potential procedural brake-pumping, critics had more or less the same rejoinder: Chief U.S. Circuit Judge Merrick Garland.

*Merrick Garland stares at the steam rising from his coffee for a long time* https://t.co/qXgrHIzz0I

You mean a gimmick like not taking up 400 pieces of legislation in the senate or changing the rules like with Merrick garland? https://t.co/mQEaFIJIHx

It wasn’t long before Merrick Garland’s name was trending on Twitter.

Other McConnell critics were simply content to point out the GOP’s apparent hypocrisy at being potentially steamrolled on a technicality.

“The senators who never gave Merrick Garland a vote and who’ve been cranking through the confirmation of unqualified judges can’t find enough smelling salts and fainting couches when Pelosi plays a little hardball on an impeachment trial,” boasted liberal Congressman Jim Himes (D-Connecticut).

Comedian Nick Pappas wasn’t joking when he posted the following:

Feel free to hold the Articles of Impeachment from the Senate as long as you want.

“The House has much of an obligation to transmit the articles of impeachment as the Senate had an obligation to give Merrick Garland a hearing: none,” noted libertarian Cato scholar and Law Professor Josh Blackman.

Mitch McConnell explaining how he gave a fair hearing to Merrick Garland: “One of my proudest moments was when I looked at Barack Obama in the eye, and I said, ‘Mr. President, you will not fill this Supreme Court vacancy.’”pic.twitter.com/rwEp0Yb1nC

Even neoconservative Bill Kristol had some thoughts:

“Let the witnesses testify.”
This ad from Republicans for the Rule of Law will begin airing later this week on Fox and Friends and Morning Joe. pic.twitter.com/XT0foO5M3S

The Constitution, of course, is actually silent on the matter. Several portions of the nation’s founding charter refer to impeachment but don’t offer any such mandatory rules to be followed in the event of such a confrontational situation as has developed here.

“Is that the same Constitution that says the Senate has to consider a president’s Supreme Court nominees?” asked Supreme Court reporter Lawrence Hurley.

“They did consider him and they rejected him,” he argued. “Nothing in the constitution calls for hearings or a vote. Look it up.”

“That was my point,” Hurley replied.

Pelosi is saying more than that she can hold onto the articles… she is saying she has to know the senate rules before she can send them over. That’s not how impeachment is described in the constitution.

“But neither does the Constitution say the House is required to transmit the articles to the Senate, right?” Hurley pressed.

Carroll was eventually forced to concede the point.

“They can keep them sure,” he said. “But nothing in the constitution says the senate has to agree to trial procedure before the House can send them over which is what Pelosi is claiming.”