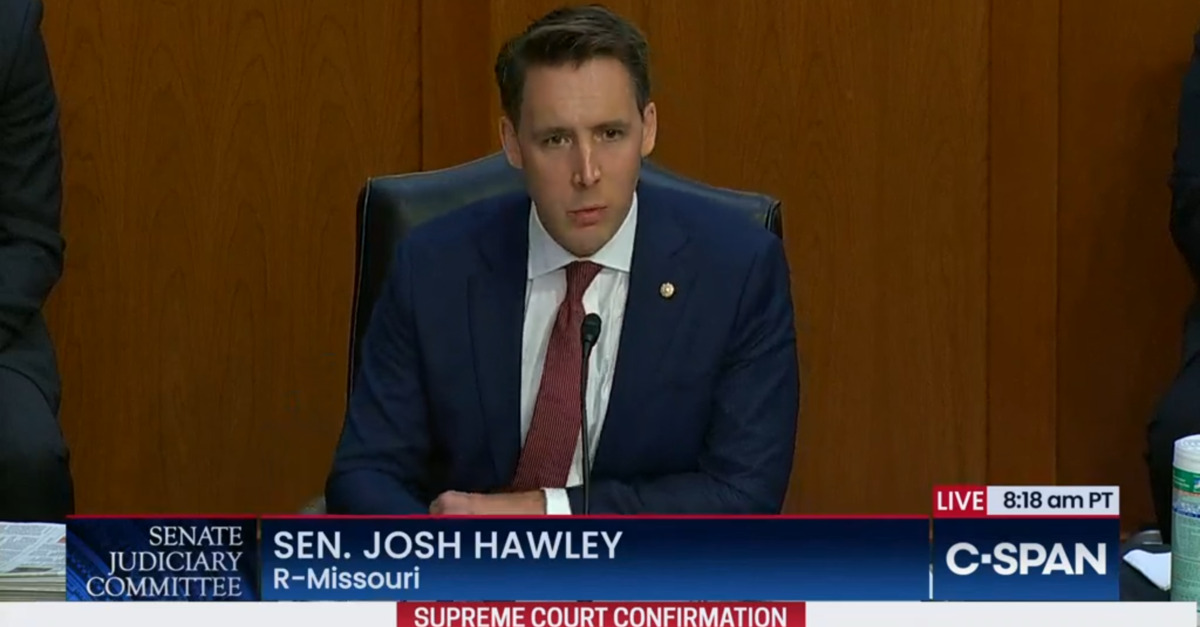 Sen. Josh Hawley (R-Mo.) lamented the specter of an anti-Catholic scourge during Senate Judiciary Committee hearings for U.S. Supreme Court nominee Amy Coney Barrett on Monday. Little did the senator know that such alleged persecution–by his own standards–has long emanated from his fellow party members.

Barrett has been sharply questioned over her participation in People of Praise, a right-wing ecumenical group centered on an amalgamation of Catholic scripture and charismatic practice with a male-dominated hierarchy that has been characterized as cult-like. Liberals and Democrats have framed their concerns as relevant and necessary inquiries into how Barrett’s beliefs might reflect as a lifetime member of the nation’s high court. The GOP, in turn, has said those criticisms by accusing Barrett’s opponents of rank religious bigotry.

“The Constitution says that people of faith like Judge Barrett are welcome in high office–welcome in any office–welcome throughout our public life,” first-term Missouri senator Hawley observed. “And I would just say to my Democrat colleagues, that these years now, this pattern and practice, as we say in the law, this pattern and practice of religious bigotry, because that is what it is–when you tell somebody they are too Catholic to be on the bench; when you say they will be a Catholic judge not an American judge, that’s bigotry. The pattern and practice of bigotry from members of this committee must stop and I would expect that it would be renounced.”

Hawley went on to reference the landmark Supreme Court case of Griswold v. Connecticut. The 1965 case established the constitutional “right to privacy” by overturning a state law which restricted the purchase and use of contraception. The case and its progeny are widely and consistently scorned by the conservative movement of which Hawley is a leading figure.

But it wasn’t just the prose and precedent that so upset Show-Me State’s junior senator on Monday. Rather, Hawley said that even referencing Griswold–a classic example of the living Constitution style taught to every law student in the U.S., including Barrett–was itself a form of anti-Catholic bigotry.

“I just heard my colleague Sen. [Chris] Coons make a reference to an old case–the Griswold case–which I can only assume is another hit at Judge Barrett’s religious faith–referring to Catholic doctrinal beliefs” Hawley said without providing any evidence whatsoever. “This is the kind of thing I’m talking about and this is the sort of attacks [sic] that must stop.”

But is merely referencing the well-known and hugely important case an example of anti-Catholic bias? It is decidedly not.

Hawley was criticized for turning Griswold into an anti-Catholic slur:

Is it a new Senate rule that only Republicans get to ask about Griswold v. Connecticut? https://t.co/ruj8bqrSig

Sen. Josh Hawley just said that merely mentioning the words "Griswold v. Connecticut" is anti-Catholic, in case you are wondering how this hearing is going.

In fact, bringing up Griswold in a substantially similar context has been done before–by Sen. John Kennedy (R-La.).

During Barrett’s 2017 confirmation hearings for her current seat on the U.S. Court of Appeals for the Seventh Circuit, Kennedy asked Barrett about the specific language used by the nation’s high court to establish the right of privacy in Griswold.

Here’s how that exchange went:

KENNEDY: Do you think there’s a right to privacy in the Constitution? I mean, when Griswold came down and you read it, what did you think? Did you say, “This is a well-reasoned opinion, and I agree with it?” Of course you said you’re going to follow it. We all follow the law. If you don’t follow the law, you go to jail, okay? I’ll stipulate that, too. But what did you think about the opinion?

BARRETT: I wasn’t alive when Griswold came down.

KENNEDY: Well, what about when you first read it?

KENNEDY: Okay. I am going to move on. I get it. I do not agree with the position you are taking where you will not talk to me about the law, but if that is what you are going to want to do, that is your call. It is America. It is a free country.

Kennedy, of course, ultimately went on to confirm Barrett for the appeals court post. He was never accused of anti-Catholic bigotry for bringing up one of the major structural elements of modern U.S. constitutional law.