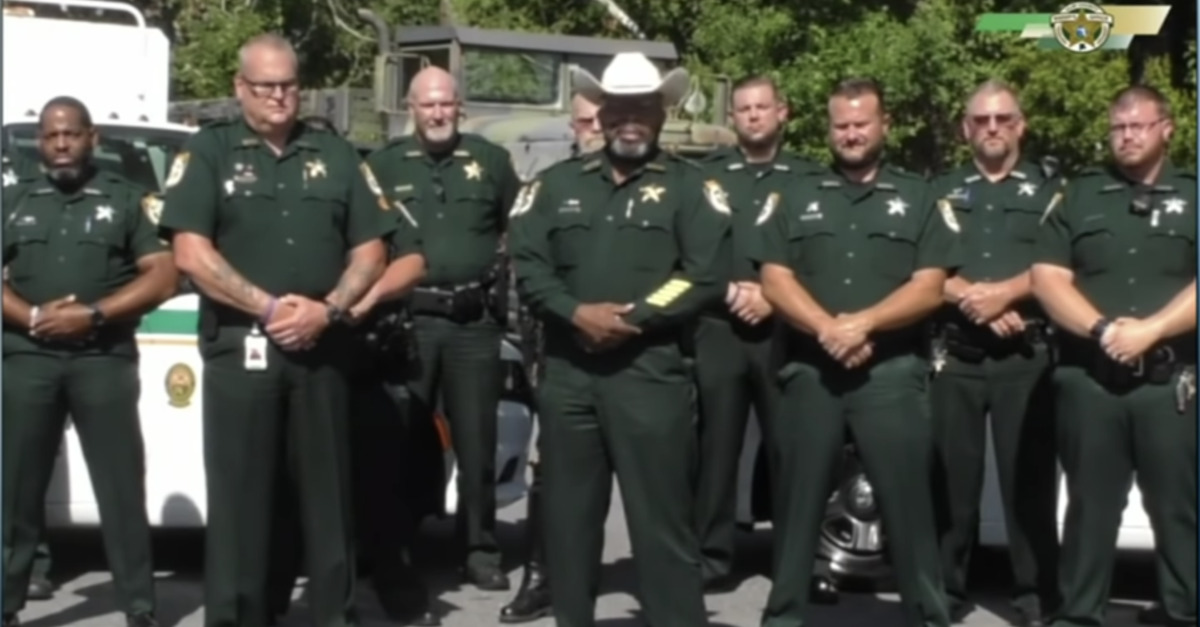 A controversial sheriff in Florida was reportedly given two choices: immediately resign his position and never seek another elected office or face felony charges.

Clay County Sheriff Darryl Daniels made national headlines earlier this year when he threatened to make “special deputies of every lawful gun owner in this county” in order to “handle” Black Lives Matter protesters who showed up in his community. On Thursday, Daniels was charged with three felony counts–two for allegedly lying to law enforcement and one for alleged tampering with evidence. The sheriff was also hit with a misdemeanor charge for knowingly giving false information to law enforcement.

Eighteen deputies looked on as Daniels made the remarks about deputizing gun owners.

“And if you come to Clay County and you think for one second, we’ll bend our backs for you, you’re sadly mistaken,” he said one month ago. “I know what happens when lawlessness prevails. And in this day and time, God is raising up men and women just like the folks standing behind me who will have strong backbones and will stand in the gap between lawlessness and the citizenry we’re sworn to protect.”

Behind the scenes, however, Florida state attorneys Melissa Nelson and Brad King were working a decidedly more salacious angle: allegations that Daniels abused his authority by ordering a deputy to arrest his onetime mistress on ginned up stalking charges.

Cierra Smith, a former corrections officer, and Daniels had been in a long term adulterous relationship since 2012–when she was the sheriff’s subordinate employee. In 2019, Daniels’s wife learned about the indiscretions and allegedly threatened to kill Smith.

The three eventually attended the same event in May 2019. After they all left, Daniels called in the stalking report and Smith was arrested but was not booked because the responding officer said there was no probable cause to go any further.

After the fallout from that false arrest, Smith was quizzed by own bosses over allegations that she had had sex with Daniels at work–a claim that was never proven. Smith was relieved of her duties pending an internal investigation before eventually resigning. Daniels has largely remained tight-lipped about the scandal.

It was reported earlier on Thursday that King’s go at the investigation had drawn to a close, and that felony charges are looming. That was according to various local media outlets.

Local NBC affiliate WLTV cited “multiple sources both in law enforcement and within the Clay County Sheriff’s Office” that said Daniels was given the quit or be charged ultimatum. But, the outlet noted, “Daniels called a few employees together Thursday to tell them he would not leave voluntarily.”

Daniels appeared to be taking the defiant route–according to WLTV, Daniels was being processed with the charges late Thursday evening but details were scarce.

“I find the timing of the obtaining of a warrant and pressing of charges suspicious in light of an election that’s pending five days from now,” the sheriff’s attorney Matt Kachergus said in a statement. “It would appear that the timing of this is designed to influence the outcome of that election.”

That election in question, the GOP primary, will be held on August 18.

No Democrat is running for the seat, so the winner will almost certainly serve as Clay County’s de facto sheriff.