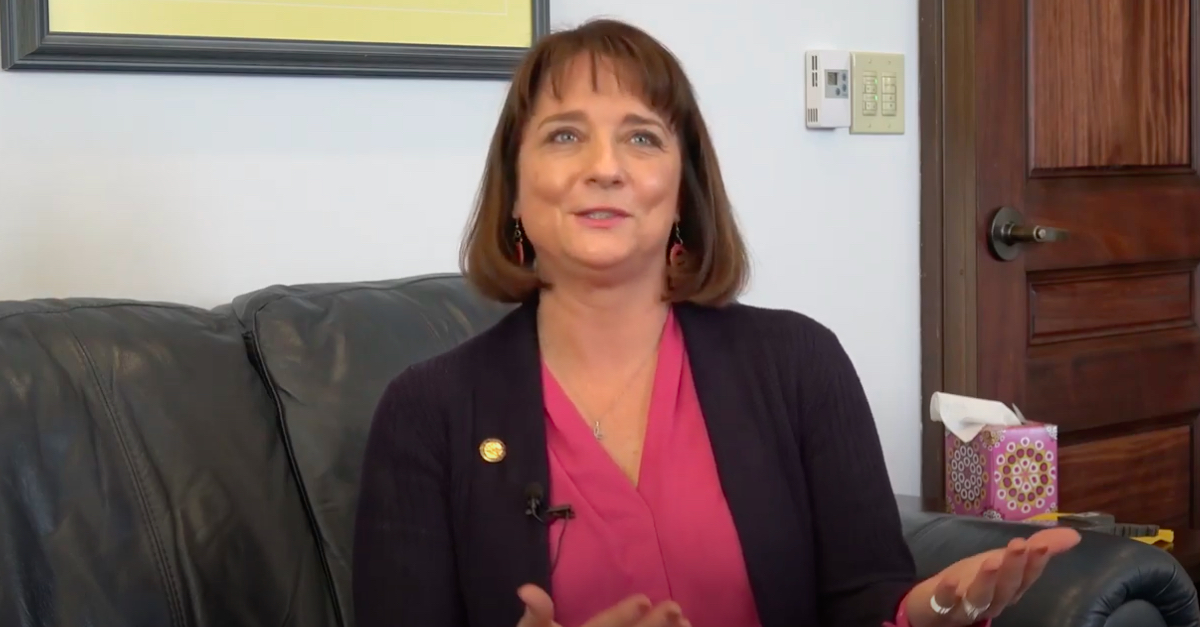 A Republican state senator from Alaska who referred to public face mask requirements as “tyranny” has been banned from traveling on future Alaska Airlines flights after repeatedly confronting and quarreling with airline staff while refusing to comply with the rules, several news outlets reported Sunday.

“We have notified Senator Lora Reinbold that she is not permitted to fly with us for her continued refusal to comply with employee instruction regarding the current mask policy,” airline spokesman Tim Thompson said in a statement to Law&Crime on Monday. “This suspension is effective immediately, pending further review. Federal law requires all guests to wear a mask over their nose and mouth at all times during travel, including throughout the flight, during boarding and deplaning, and while traveling through an airport.”

Last week, videos posted to social media showed Reinbold in a dispute with employees from Alaska Airlines and Juneau International Airport over the mask rule. This resulted in a police response. While she was permitted to board the flight back to Anchorage, where she lives, a post-incident investigation resulted in the decision to ban her, per the New York Daily News.

Second video. Translation “I want to speak to your manager!” #akleg pic.twitter.com/8ptq6ItQfF

Reinbold told the Anchorage Daily News that she was “reasonable” with all the employees throughout the encounter.

“I have been flying on Alaska Air for decades and am an MVP Gold (frequent flyer). I inquired about mask exemption with uptight employees at the counter,” she added.

While being banned from a single airline wouldn’t pose a significant problem to most Americans, Reinbold’s in a unique situation: given that Alaska is the least densely populated state in the nation, Alaska Airlines provides the only regular direct flights from her home in Anchorage to the state capital in Juneau.

According to a Monday report from the Washington Post, without the option to fly to the capital, Reinbold had to embark on a drive of more than 14 hours—which included a short stint through Canada and a ferry ride—to make it to Juneau on Monday.

“Alaska I went to new heights to serve you & have a new appreciation for the marine ferry system,” she wrote in a Facebook post. “I am keenly aware of the monopoly in air transport to Juneau that needs reviewed! Please thank my husband for giving up his birthday to make a long unexpected trip to Juneau by road/ferry system! Nothing could get in the way to be in the Capitol to fight to executive branch  infringement on the legislature  & defending your rights by trying to stop HB76 which is on the Senate floor tomorrow!”

She also complained that Alaska Airlines publicly commented on the decision to ban her without her permission, saying the airline deprived her of “due process,” which doesn’t apply to private companies.

“Ak Air: Until there is a fair determination, after thorough review of both sides, I believe this should be confidential. I learned about Ak Air decision before  I knew there was even an inquiry and before I had a chance to talk to or discuss this with anyone at Alaska Air,” she posted on Facebook. “I never received a warning via a yellow card per their policy either.  There was no due process before a temporary decision that is ‘under review’ was made public. Alaska Airlines sent information,  including my name, to the media without my knowledge nor permission. I do believe constitutional rights are at risk under corporate covid policies.”