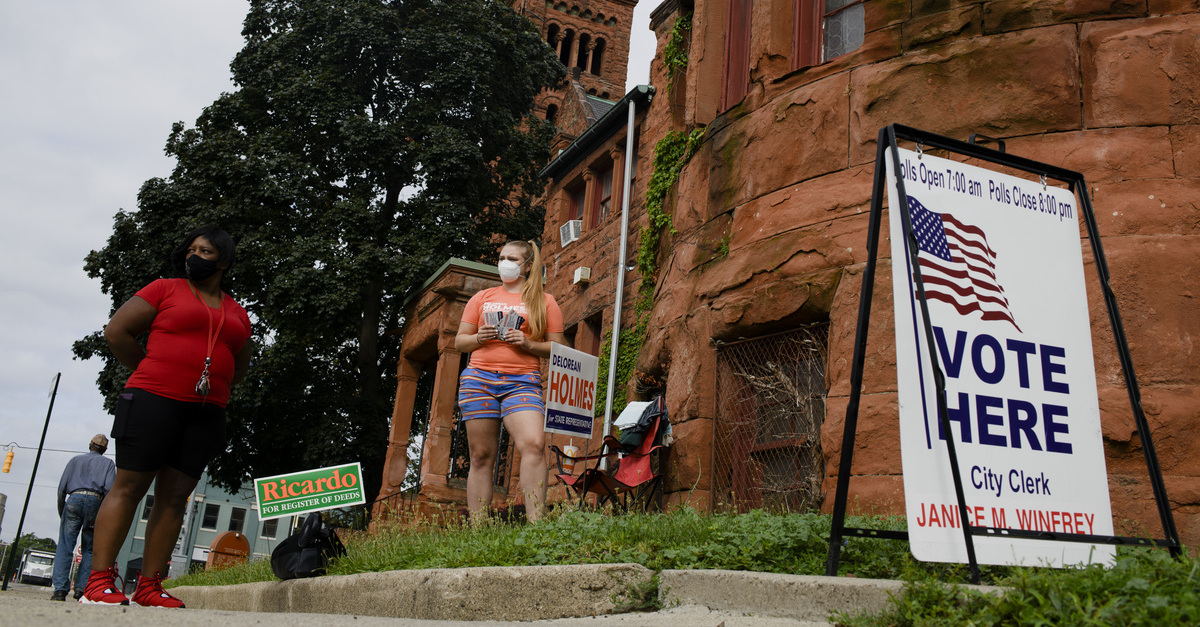 Don’t bring your guns to vote, leave your guns at home—at least if you live in one of the foremost and important swing states this year. Michigan will ban the open carry of firearms within 100 feet of polling places in order to tamp down increasingly widespread anxiety about right-wing efforts to engage in unlawful voter suppression during the upcoming general election, according to The Detroit News.

Michigan Secretary of State Jocelyn Benson (D) announced the change in guidance provided to election officials on Friday. The guidance effectively slots guns into the same category as campaign literature, signa and other electioneering material—which has long been prohibited from being within 100 feet of a polling location.

“The presence of firearms at the polling place, clerk’s office(s), or absent voter counting board may cause disruption, fear or intimidation for voters, election workers and others present,” the guidance notes. “Absent clear standards, there is potential for confusion and uneven application of legal requirements for Michigan’s 1,600 election officials, 30,000 election inspectors, 8 million registered voters and thousands of challengers and poll watchers on Election Day.”

Benson’s office has also mandated that the following notice be displayed at all voting locations in the Wolverine State:

The open carrying of a firearm is prohibited in a polling place, inside any hallway used by voters to enter or exit a polling place, and within 100 feet of an entrance to a building containing a polling place on Election Day. Outside of 100 feet, no person can act in a way that would tend to intimidate, hinder or impede voters on their way to the polling place. These prohibitions also apply to an election clerk’s office or absent voter counting board on Election Day.

The secretary of state’s decision is likely to prove controversial in some quarters as Michigan does not have specific laws on the books that directly prohibit the open carry of guns at polling places.

Earlier this month, Benson faced scrutiny after appearing to dodge questions over whether Second Amendment activists would be able to bring their guns along as poll watchers.

“I would be very concerned about that if anyone does that and we’re going to be looking at what the law does and does not allow,” Benson told local ABC affiliate WXYX at the time. “We’ll be making a clear announcement as we get closer [to Election Day].”

Authorities again promised to provide clarity on the issue earlier this week after liberal gun control organizations raised the prospect of potential voter intimidation with the media.

“We’re prepared if something happens but we also don’t want to ramp up voter’s fears,” Benson told West Michigan’s FOX17 on Tuesday. “We’re partnering with law enforcement, we want to make sure we’re increasing our poll worker training so that they know what to do if they see something.”

The specter of political violence is currently a palpable concern in the United States–and Michigan has felt the heat acutely.

In between Benson’s somewhat evasive early October statements and Friday’s announcement, more than one dozen members of so-called anti-government “militia” groups were arrested over an alleged ploy to kidnap the state’s Governor Gretchen Whitmer (D).