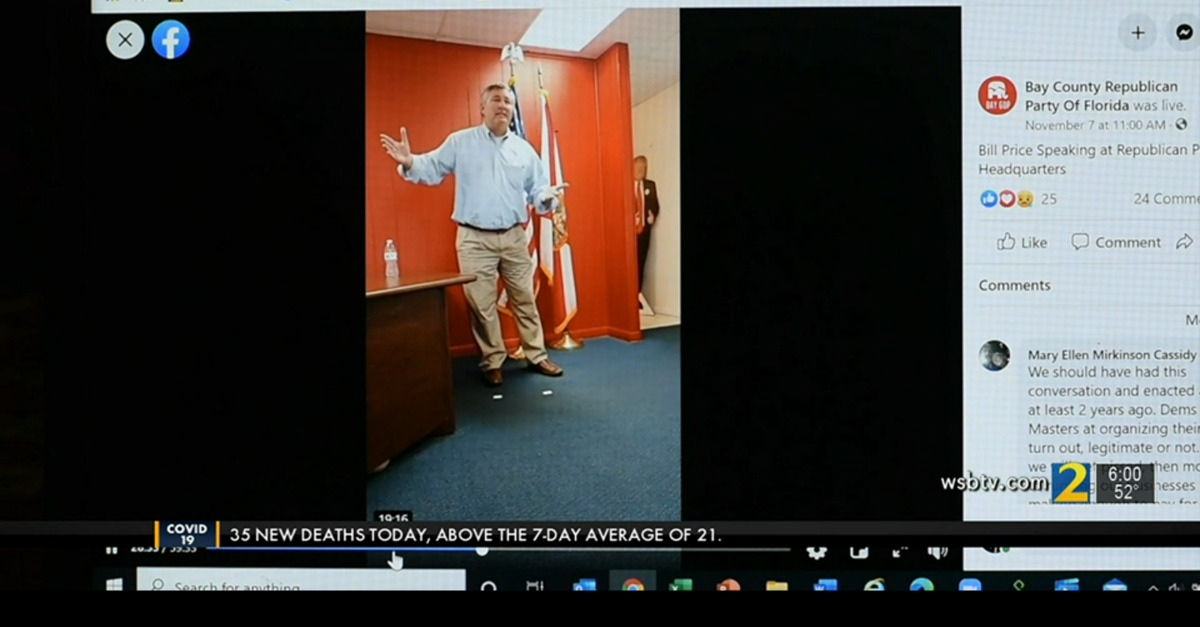 A Republican lawyer who lives in Florida is under investigation by election officials in Georgia after allegedly encouraging other members of his party to violate the law and register to vote in the Peach State’s upcoming Senate runoff elections. Election officials also say that Bill Price, a Florida resident, illegally attempted to register to vote in Georgia himself and that they plan to stop his voter registration from taking effect.

According to Atlanta-based ABC affiliate WSB-TV, attorney Price can be seen in a since-deleted Facebook Live video addressing members of the Bay County GOP in Florida on Nov. 7–roughly half an hour after the 2020 presidential election was called by most media outlets for Joe Biden.

Journalist Nicole Carr, who saved a copy of the video just before it was deleted, notes that Price goes on to tell the crowd he plans on moving to his brother’s home in Georgia so he can register to vote for incumbent Republican Senators Kelly Loeffler and David Perdue.

The attorney also reportedly repeated his brother’s name and address out loud for the party faithful to copy it down in the hope that they will actually follow his advice and illegally register to vote in the upcoming elections that will determine control of the U.S. Senate.

Carr’s report notes a back-and-forth after that suggestion:

“We can truly register at that address?” one woman asks.

“And can it be anywhere in the state of Georgia you can register?” another woman asks. “So if you’ve got cousins, dogs, cats that live somewhere else, it doesn’t need to be one particular county?”

“Yep,” Price answers. “This is going to be a statewide election on Jan. 5th. I’m gonna be voting for Kelly Loeffler?” (In the recording, his voice indicates a question, as he mispronounces the senator’s last name). “And David Perdue.”

One woman also asks about the deadline to register in Georgia. Price said he’s unsure, would have to check, but offers advice on how to get it done online.

“It can be done online or you can request your ballot at your new address in Georgia by mail,” Price said. You just go to the secretary of state’s website for the state of Georgia and register to vote there.”

Georgia’s election officials have repeatedly warned people against attempting to game the system–and called out alleged organized efforts to do so–in order to vote in the pivotal Senate runoff elections.

“Let me be clear, those who come to Georgia with the intention of voter fraud will be prosecuted,” Georgia Secretary of State Brad Raffensperger (R) said in mid-November.

“We thoroughly investigate every single allegation of voter fraud,” he continued. “Anyone is welcome to move to the state named the No. 1 place to do business. However, let me warn anyone attempting election mischief: If you illegally participate in our elections, you might be spending a lot more time in Georgia than you planned.”

Price, for his part, told the outlet he was just joking about the whole thing–and claimed that he was simply making “humorous comments” in order to draw attention to what he termed, without evidence, “massive and widespread” voter fraud in Georgia; election officials there disputed his denial and said it’s no laughing matter.

According to Carr, the Paulding County Board of Elections confirmed that Price did, in fact, register to vote at his brother’s address and swore in “an affidavit that he was a Georgia resident and eligible to vote.”

“When we clearly know that he is not [eligible to vote in Georgia],” Republican election supervisor Deidre Holden told WSB-TV.

“What kind of message is this sending out to our children and our grandchildren and our neighbors that if you don’t win an election, that you can just go out and steal one?” Holden said. “And that’s absolutely unacceptable here in the State of Georgia.”

An investigation into Price’s attempt to register to vote is currently underway.

On Monday, Holden was contacted by state elections investigators who flagged Price’s registration attempt and shared the footage with her. A special meeting is reportedly slated for next week in order to stop Price’s effort from taking effect.

The State of Georgia is considering felony charges for the Republican attorney.