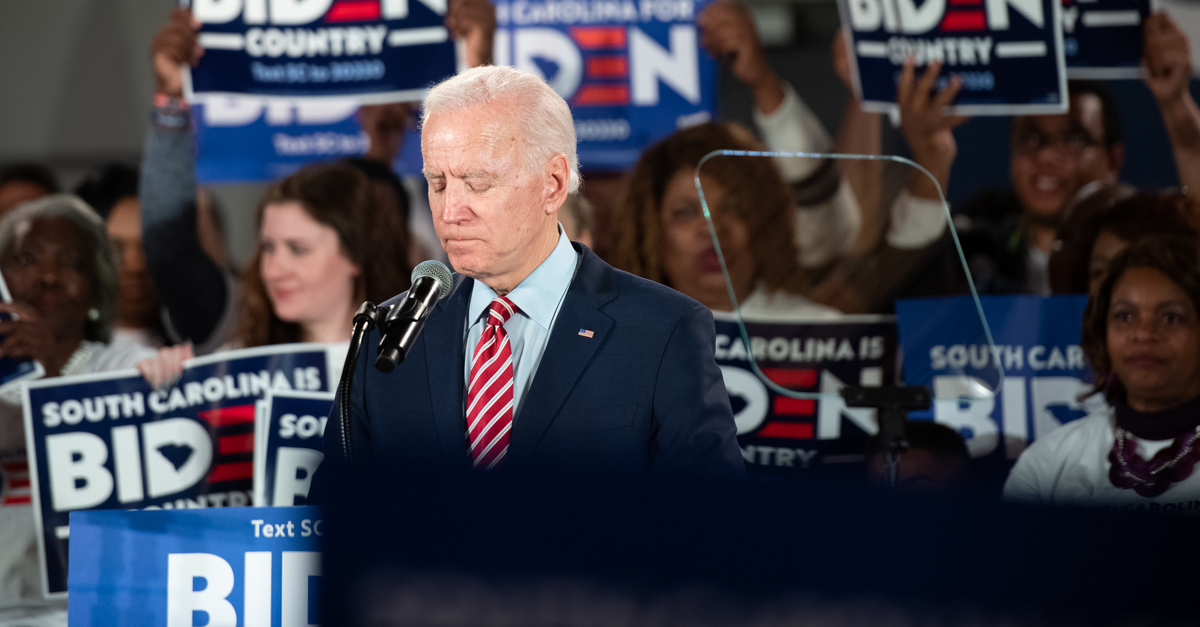 A surrogate for Joe Biden‘s presidential campaign was, in her words in a group chat, “forced to resign” on Monday from Pennsylvania Young Democrats after promoting a doctored video of fellow 2020 contender Sen. Bernie Sanders (D-Vt.) and for allegedly sharing anti-Semitic tweets about him and his online supporters.

Lindy Li previously served as the treasurer for the Pennsylvania Young Democrats, a position she has since admittedly resigned.

“Biden Surrogate [Lindy Li] as forced to resign as Treasurer of the PA Young Democrats after spreading doctored video of Bernie Sanders and making antisemitic comments about him,” tweeted immigration paralegal Jamie Agustin, who broke the story on Twitter.

Li later confirmed that she resigned in a Twitter post–but disputed the circumstances surrounding her departure. 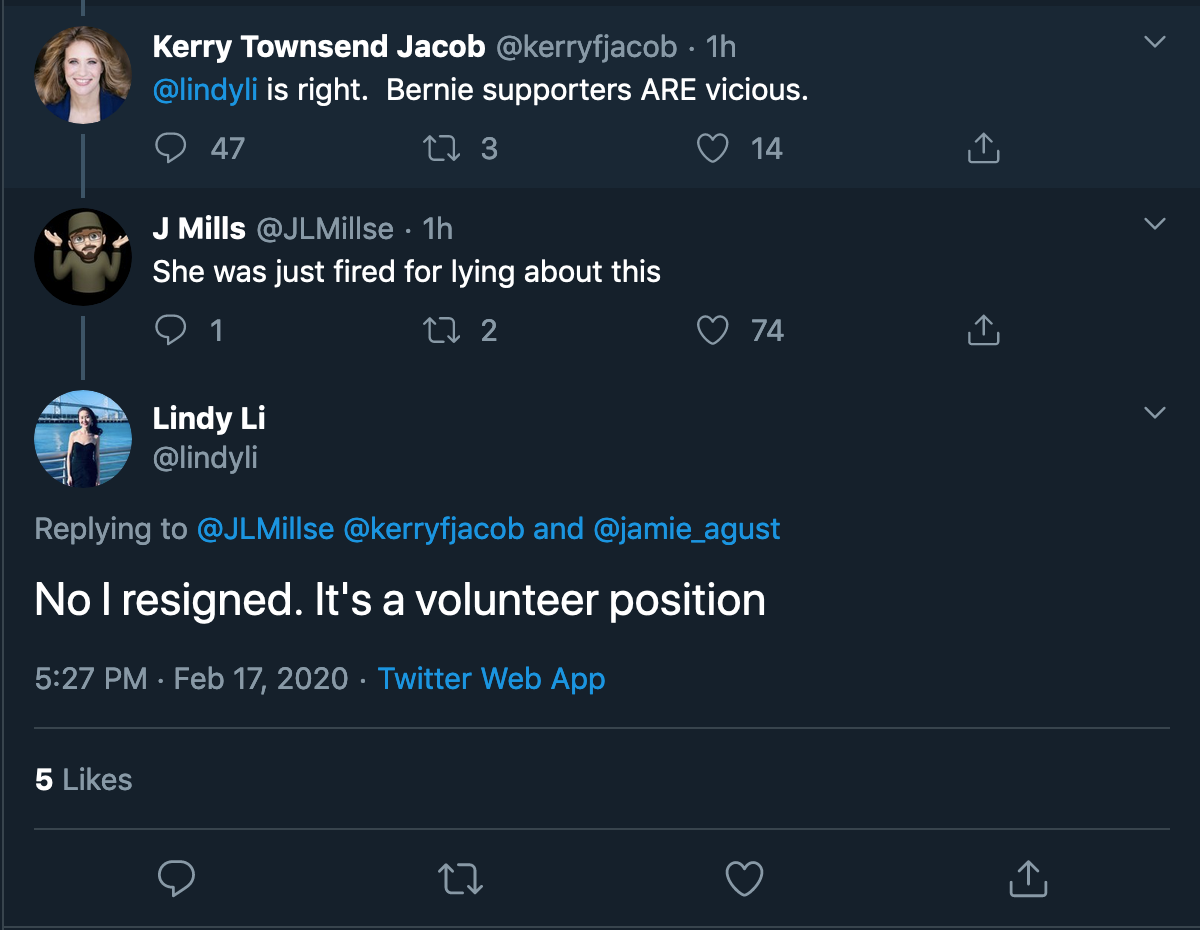 “According to leaked messages Lindy sent in a private pro-Biden group chat, the Biden campaign knows about all of this,” she added–suggesting that Biden’s recent public denunciation of Sanders’ online supporters was coming from a place of cynicism and dishonesty.

Agustin herself later made that same salient criticism:

Biden has been openly attacking “vicious” Bernie supporters on the news & online for the past week.

But at the same time, millions of people saw a fake video—designed to smear Sanders—spread by an *official surrogate* of Biden’s campaign.

Does Biden condone this? pic.twitter.com/YiWKKQfbs3

Agustin also shared screenshots from several pages of a leaked group chat titled “JIHVE BIDEN FRONT” in which Li describes the context of her separation from the Young Democrats of America affiliate group.

“I was just forced to resign as Treasurer of PA Young Dems because of my anti-Sanders tweets,” Li says in the leaked chat. “No more fundraisers. Screw them.” 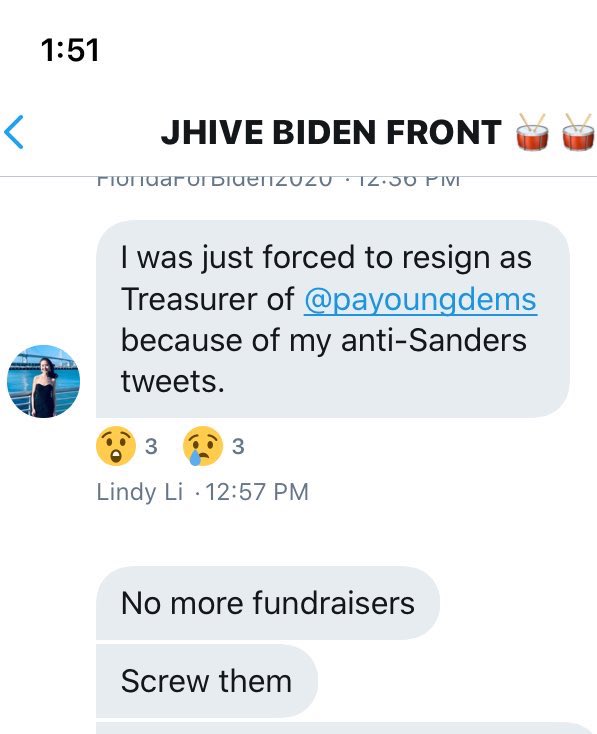 “The [Biden] campaign is furious over this,” Li wrote in another series of group chat messages. “We’ve gone to the press. Thanks for standing with me, my dears. What a day/life. I asked for my money back. So at least I’ll be getting that.” 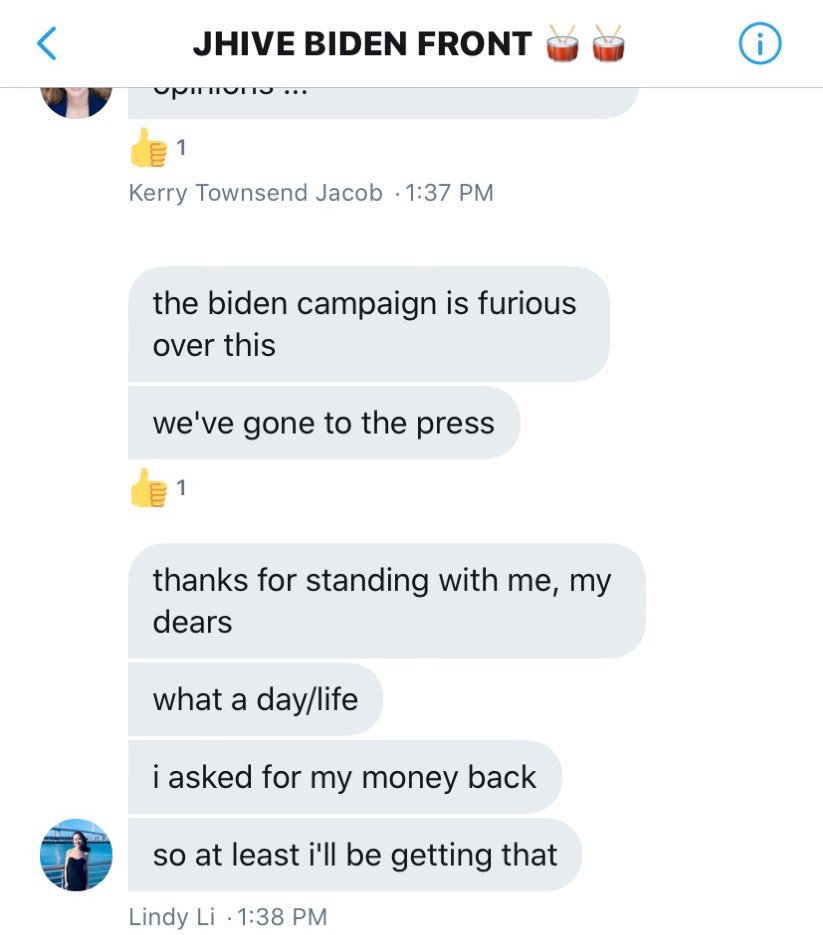 “Bernie supporters are seen as an army of abusive white men that harass people online,” Agustin told Law&Crime when asked about her tweets. “In reality, we are an intersectional coalition of diverse people from all backgrounds that are working towards economic and racial justice. We fight for all people to have healthcare, higher wages, tuition free college, student loan debt forgiveness, social security benefits, a livable planet, and so much more.”

Agustin continued—pushing back against the “Bernie Bro” stereotype of Sanders supporters and noting that acolytes of the Vermont senator are themselves frequently the targets of online abuse:

In my experience, Bernie supporters are the most demonized and harassed group online. Our identities are erased and we are told we do not understand the marginalized—when we are the marginalized. Bernie leads among Latinos and they’ve donated the most to his campaign. As someone who is Mexican American I can tell you Bernie speaks to my community and our struggles. We are pandered to every 4 years and then completely disregarded. He gives hope to those who have given up on the political process.

Li’s original post was shared by a Who’s Who collection of the #Resistance and Never Trump cohorts–establishment liberals and conservatives who have long expressed extreme antipathy toward Sanders’ democratic socialist politics and working class supporters.

In the doctored video, misleadingly titled: “#BernieSanders lavishes praise on Communist Russia, preferring the Soviet Union to the American way of life,” Sanders praises subway stations in Moscow and says that he was impressed with cultural and youth programs during a sister city visit in 1983 while he was the mayor of Burlington, Vermont.

Sanders supporters pointed out the strange title the clip was given and that his comments were not particularly controversial. Others quickly pointed out that Li had “deceptively edited” the video to remove several fulsome criticisms that Sanders had leveled at the Soviet Union regarding individual liberties.

“One thing that would be helpful in discussing the nuances of his views on the Soviet Union [and] the international left would be a degree of literacy about them from commentators,” noted CNN reporter Andrew Kaczynski–while quote-tweeting journalist Jonathan Alter (the quoted tweet was removed). “For instance, he was always critical of authoritarianism in the Soviet Union.”

“For instance, the video people are responding to is edited with a false caption to cut his comments on Soviet Union’s deficiencies in health care and not being democratic with the author of the tweet hiding replies linking to the full press conference,” Kaczynski continued–pointing out Li was intentionally acting to keep the full and unedited video from being seen in the replies to her tweet.

Alter and several others deleted their original posts and offered apologies for mistakenly parroting the edited video.

“I didn’t know the full tape was available,” Alter admitted. “Having now watched all of Bernie’s comments, many of which were aimed at boosting perestroika and a democratic society and launch of a sister city program (a fine idea, btw), the overall presentation was a little puffy but not so bad.”

The Intercept’s Glenn Greenwald pointed out the contradictions:

The same doctored video & blatantly false tweet that was spread virally all over the internet by people like @BillKristol, @ananavarro and so many other GOP operatives and national security state officials. Unlike @lindyli, they’ll suffer no consequences for spreading this fraud: https://t.co/fsTFE661Lz

Nyhan also walked back some of his criticisms once the full video emerged–but insisted that Sanders was still politically vulnerable on the top of “awful regimes.”

Law&Crime reached out to Nyhan for comment on this story but no response was forthcoming at the time of publication.

Li’s resignation was confirmed by Pennsylvania Young Democrats President Thomas DeLuca, who told Law&Crime in an email that he only received Li’s formal resignation letter within the past hour. DeLuca declined to comment on the exact circumstances leading up to Li’s exit from the group–only saying that he understood she “willingly offered her resignation today.”

“You will have to ask Ms. Li directly as to why she chose today to offer her resignation,” the group’s president said–but suggested that Li’s vituperative anti-Sanders attitude has been an issue within the group for awhile.

Editor’s note: this article has been amended post-publication to include additional quotes and to add a hyperlink.