‘A Superspreader Event on Top of a Domestic Terrorist Attack’: At Least Two Representatives Test Positive for COVID-19 After Assault on Capitol 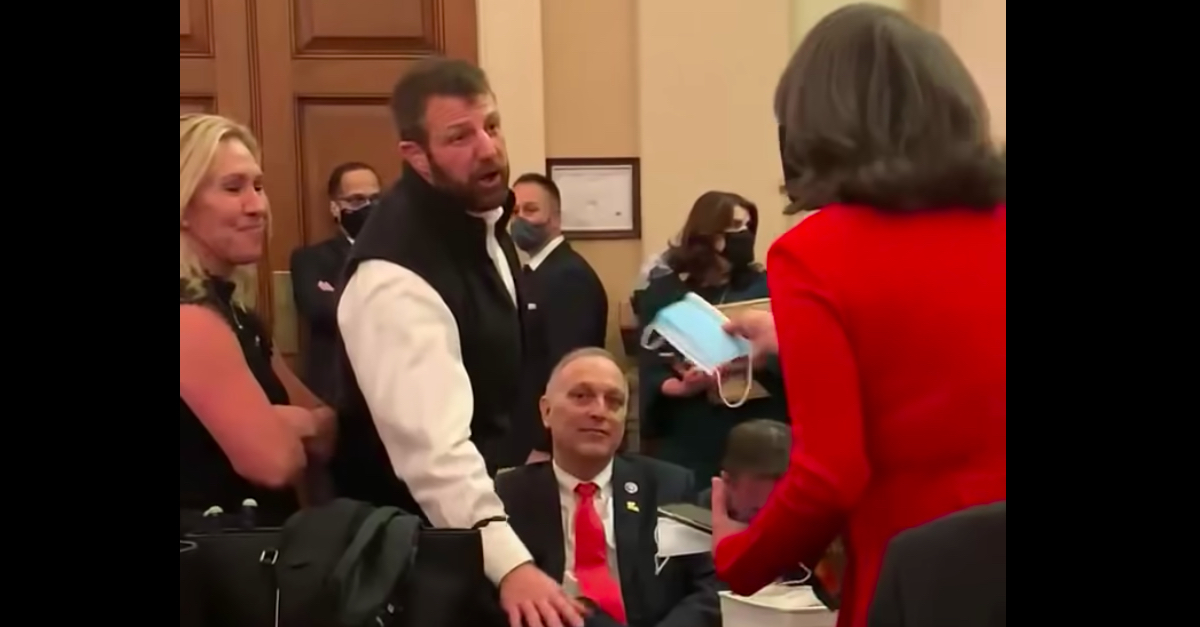 The fallout from the assault on the U.S. Capitol continues to spiral. Two Democratic congresswomen tested positive for COVID-19 after sheltering in place on Jan. 6 with Republicans who refused to wear protective face masks for the duration of the siege. Reps. Pramila Jayapal (D-WA) and Bonnie Watson Coleman (D-NJ) both blamed their maskless House GOP colleagues for exposing them to the virus. Rep. Jayapal condemned their implacable opposition to the simple health measure on Monday.

In a statement, Jayapal said she tested positive after being “locked down in a secure room” during the Capitol riots with “several Republicans who not only cruelly refused to wear a mask but recklessly mocked colleagues and staff who offered them one.”

The statement included a link to a video taken during the Capitol lockdown in which multiple Republican members of Congress are shown congregating together closely and laughing amongst themselves when offered masks by Rep. Lisa Blunt Rochester (D) of Delaware. The GOP members shown in the clip were identified by CNN and include QAnon adherent Rep. Marjorie Taylor Greene (GA), Rep. Markwayne Mullin (OK), Rep. Andy Biggs (AZ), Rep. Scott Perry (PA), Rep. Michael Cloud (TX), and Rep. Doug LaMalfa (CA).

“Only hours after Trump incited a deadly assault on our Capitol, many Republicans still refused to take the bare minimum COVID-19 precaution and simply wear a damn mask in a crowded room during a pandemic—creating a superspreader event ON TOP of a domestic terrorist attack,” Jayapal early tweeted Tuesday morning. “Any Member who refuses to wear a mask should be fully held accountable for endangering our lives because of their selfish idiocy. I’m calling for every single Member who refuses to wear a mask in the Capitol to be fined and removed from the floor by the Sergeant at Arms.”

She also reiterated her support for impeaching President Donald Trump, stating that she “will not rest until I do everything in my power to remove this president from office.”

Coleman, a breast cancer survivor, said on Monday that she felt “ok,” but was on her way to a local hospital to receive monoclonal antibody treatment.

I want to update everyone. While I feel ok, on my doctor's advice I'm on my way to a local hospital for monoclonal antibody treatment.

I thank you for the outpouring of supportive messages.
The love you've sent has been overwhelming.

Asked why Rep. Greene refused to wear the mask despite being in close quarters with colleagues who could be vulnerable to the virus, her office responded: “Congresswoman Greene is a healthy adult who tested negative for COVID at the White House just this week. She does not believe healthy Americans should be forced to muzzle themselves with a mask. America needs to reopen and get back to normal.”