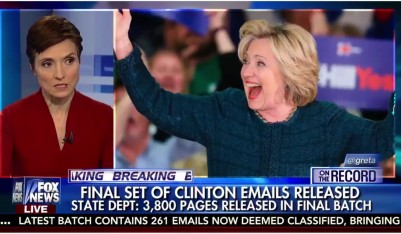 In the interview, Herridge addressed the one e-mail that was withheld from Monday’s release at the request of an unidentified law enforcement agency, telling Van Susteren that according to a tip she received several months ago it is possible that the e-mail might have been withheld investigators because  it shows ‘intent’ to disseminate classified information outside of the proper secure channels.

“I think it is striking that one email is being withheld at the request of law enforcement,” Herridge said, “because you know that would be a very important piece to the FBI investigation understanding the intent and whether the individuals knew or believed at the time that the information they were sending was classified.”