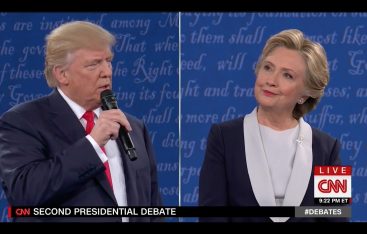 Donald Trump and Hillary Clinton have both taken the gloves off and are going for the jugular in the second presidential debate.

During one particularly contentious exchange over Clinton’s use of a private email server, Trump promised to appoint a special prosecutor if he is elected to re-open the email investigation.

When it was Clinton’s turn to respond she said the country should be glad someone with Trump’s “temperament” is not in charge of the laws of the land.

Trump immediately shot back, “Cause you’d in jail.”