Teacher Charged After Being Caught on Video Dragging Daughter by Neck 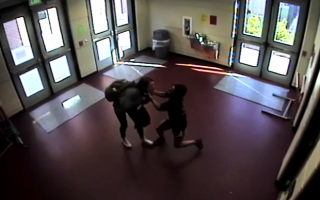 An Alabama public school teacher is facing domestic violence charges for allegedly attacking her teenage daughter. Concerned community members are petitioning for her removal from the school. A school surveillance video obtained by AL.com appears to show Lori McCombs, a physical education teacher at Hoover High School, grabbing her daughter by the neck and dragging her.

The incident took place back in August 2015, and McCombs was arrested for domestic violence for the alleged assault in May of this year. According to AL.com, police looked into the incident at the time, but McCombs’ daughter didn’t fill out the necessary paperwork until the spring.

This isn’t the only time McCombs has gotten in trouble for an alleged physical altercation at the school. In March of this year, the teacher was arrested after a 14-year-old female student accused her of grabbing her wrist and pulling her out of a locker room, into a hallway. That alleged incident was also captured on video. McCombs was arrested and charged with harassment after a month-long investigation. A judge dismissed that case in April, and McCombs did not face discipline.

McCombs is still listed as being employed by the school, and an online petition calling for her removal is now circulating. According to the petition, McCombs teaches special needs children, physical education, strength and conditioning, and is a track coach. The petition says:

Teachers that verbally and physically abuse children or bully them in any way have no place in the education system, especially working with special needs children who are unable to defend themselves. Please do not allow McCombs to continue to work in the Hoover City School System in any capacity.

“It’s astounding to me that, based on what happened, she continues to work there,” Shane Shears, McCombs’ daughter’s lawyer, said. “Hoover City Schools has not taken any action relative to Lori McCombs for this school year. That has made some parents and some students very nervous.”

Brett Bloomston, McCombs’ attorney, denied the allegations against her client. “What we have here is a minor child with a serious behavioral issue,” Bloomston said, “and because of financial motives to implicate the School Board in wrongdoing, Lori has been subjected to false allegations, allegations against a good mother and well-respected teacher.” As far as the video, he said it “does not show what prompted a mother to discipline her child. That’s unfortunate that we don’t have any more surveillance or audio on what transpired before those few seconds.”

Hoover City Schools’ spokesman Jason Gaston said in a statement to AL.com, “We respect the right of due process for both students and employees. We continue to work toward a resolution in this case and cannot elaborate any further due to its legal nature.” McCombs is scheduled to appear in municipal court on September 7.