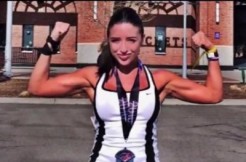 Who killed Karina Vetrano? The 30-year-old was found dead at a park in Queens, New York on Tuesday night. Medical examiners ruled that she died from strangulation, The Associated Press reports. She may also have been sexually assaulted.

Vetrano went out to run at about 5 p.m. Her father, Philip Vetrano, typically joined her on this routine, but he said he couldn’t do it this last time because of a bad back. He’d asked her not to go alone, but she went anyway.

“If you’re a runner you understand that you run every night as part of your routine, so she went, and said she’d be all right,” NYPD Chief of Detectives Robert Boyce told reporters on Tuesday.

She didn’t come home, and her father became worried. He called 911, and later discovered her body in tall grass about 15 feet from a running trail, police said.

The investigation is ongoing, but Boyce said they caught Vetrano on security video, running as late as 5:45 p.m.

“There’s a lot of forensic evidence as well as digital evidence in the area,” he said.

In a segment with Good Morning America on Thursday, former FBI special agent Brad Garrett suggested the killer might be a regular at the park, but may not have known Vetrano herself.

“Has he been watching her in the past?” he said. “Did he happen to come upon her this particular day? I don’t know, but my guess is, he’s going to have some connection to the park, and between the surveillance cameras, and checking out who patrol may know who hangs around that area, can be a potential lead.”