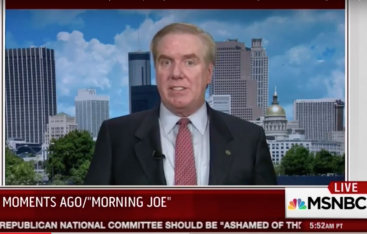 Randy Evans, a member of the Republican National Convention Rules Committee, just made a very surprising revelation on Morning Joe that GOP presidential candidate Donald Trump may not need 1,237 delegates to win the nomination after all.

Here is what Evans said:

What I do expect to happen is this, if Donald Trump exceeds 1,100 votes he will become the nominee even though he may not have 1,237.  If he gets less than 1,000 delegates then I think we are looking at a contested convention that could go on for many, many days.  Then in the middle, there is that gray area between 1,000 and 1,100.  And that’s where the unbound delegates or the delegates that have been released by other candidates come into to play, to see if there are enough of those to get either Trump or Cruz over the finish line.

The Morning Joe panel, especially Mika Brzezinski, was floored by this revelation because for months all we have heard is that Trump (or any other candidate) needs 1,237 delegates to win a majority and take the nomination.  But Evans, perhaps revealing a little more of the “inside baseball” type of thinking is now telling us that may not be the case after all.