Pence: Waterboarding Won’t Be Ruled Out in Trump Administration 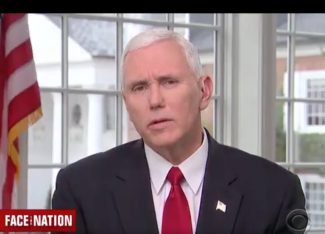 Many of Donald Trump’s policy proposals and campaign promises over the past 18-months received a great deal of attention, but two or three in particular received “stop the presses” level attention.  The most remembered policy proposal was undoubtedly Trump’s call for a temporary ban on immigration from certain countries, followed closely by the plan to have Mexico pay for a border wall.  The third “stop the presses” level proposal was probably Trump’s promise to bring back enhanced interrogation techniques for terrorist detainees, including the use of waterboarding.

Now that he is President-elect Trump, he has shown a willingness to compromise on some of the first two policies, to a certain extent.  However, when it comes to the matter of enhanced interrogation techniques, Trump has not signaled even an arguable willingness to back off from that issue.  At least, certainly not to the extent he has with the other two issues.

Accordingly, the press often turns to Vice-President-elect Mike Pence in the hopes of possibly getting a bit more information from him about Trump’s plans in military and intelligence areas.  It happened most recently on Sunday morning during an interview on Face the Nation when Pence was asked about waterboarding and enhanced interrogation by host John Dickerson.

Will Trump allow waterboarding? “We’re going to have a president who will never say what we’ll never do,” says Gov. Mike Pence. pic.twitter.com/GuFaQPXM8q

Dickerson framed the question by using a clip of Vietnam-era POW Sen. John McCain speaking out about waterboarding, and even calling it torture.

Pence acknowledged his deep respect for Sen. McCain, but refused to take waterboarding off the table as a matter of policy in the Trump administration.

“What I can tell you is that going forward, as he outlined in that famous speech in Ohio, is that a President Donald Trump is going to focus on confronting and defeating radical Islamic terrorism as a threat to this country,” Pence told Dickerson.  “And we’re going to have a president again who will never say what we’ll never do.”

Now, as a practical matter, President Trump may have difficulty getting cooperation from CIA operatives in the event he gives the order to waterboard a terror suspect.

Earlier this year, former George W. Bush-era CIA Director Michael Hayden said it is almost certain that no CIA officer will participate in waterboarding ever again due to the political fallout surrounding the use of enhanced interrogation techniques during the Bush administration.

In the same interview, Hayden famously suggested if Trump wanted someone waterboarded, he better bring [his] own damn bucket.”