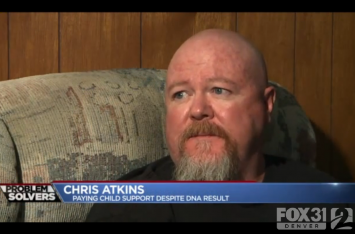 When Lori Lonnquist gave birth to a baby girl some 15-years ago, Chris Atkins asked her to marry him, believing he was the girl’s father.  Lonnquist and Atkins divorced approximately two-years later, but Atkins continued to believe that he was the father.  It wasn’t until the girl was 11-years-old when Atkins found out the truth after a DNA test revealed that he was not the father.  He says he has not been allowed to see the girl in the four years since the test results were revealed.   However, Atkins is still legally obligated under Colorado law to continue paying child support because he is listed as the father on the child’s birth certificate.

KDVR FOX31 in Denver reported on this almost unbelievable story on Wednesday night,calling it “stranger than any episode of ‘The Maury Povich Show.’”

“It doesn’t make any sense to me,” Atkins said in an interview with the news station. Atkins believes he should be granted visitation rights with the girl or be allowed to stop paying the mandated $730 per month in child support.

“I just want my daughter, but I can’t even see her, but yet I’m still paying child support,” said Atkins.

According to the report, Atkins attempted to act as his own attorney during a court hearing four years after the DNA test results came back.  This decision proved costly for Atkins who was reportedly unable to get the judge to accept the DNA report because he did not follow the proper rules for introducing evidence.

The girl’s mother, Lori Lonnquist, acknowledged that she might be “greedy” by continuing to collect the child support, but she does not appear to care how it all looks.

“I don’t feel bad about it, I really don’t,” Lonnquist told the reporter.

She also accused Atkins of abandoning his daughter, but he strongly denied the charged.

Just when you think this story could not get any stranger, KDVR managed to track down the girl’s biological father, Logan Doolen, but he reportedly said he has no plans to get involved in the fight.

Doolen said he felt bad for Atkins, but he believes if he was suddenly ordered to pay child support for the girl “that would be messed up too.”

Lonnquist also said she has no intention to go after Doolen after all these years.

“I don’t think that’s fair to come onto somebody when they didn’t know for 11 years that they didn’t have a kid and say ‘Hey, by the way, you’re going to pay child support for a kid that you didn’t know was yours,’” Lonnquist said.

Atkins told the reporter he has attempted to go back to court with an attorney in an effort to overturn the decision, but he says the judge denied the request.  As a result, Atkins remains legally obligated to pay child support until the girl turns 19-years-old.