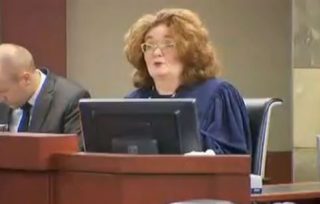 A judge in Clark County, Nevada refused to grant an order in a lawsuit brought by Donald Trump and his campaign over extended early voting hours. The complaint, filed Monday night against Joe P. Gloria, the county registrar of voters, is over an area including Las Vegas that has a high minority population. Trump contended that the after-hours voting was “coordinated with Democratic activists” in order to favor the Democratic party. Judge Gloria Sturman wasn’t having it when Trump’s lawyers asked to make the names of Nevada poll workers public.

DENIED: So basically Trump lawyers didn’t talk to SOS, didn’t do their due diligence, don’t, basically, have a clue.

“I am not going to expose people doing their civic duty to help people vote..to public attention, ridicule and harassment.” Judge in Nevada.

Judge Sturman also pointed out that Trump’s complaint didn’t even ask for such records. All it asked for was to set aside votes and voting records, which the registrar has to maintain anyway. Also, Judge Sturman didn’t even understand how that could be relevant. “How are you going to match up any electronic data with any specific person at any specific time?” she asked. The judge pointed out that even a time stamp showing that someone voted after 8pm doesn’t show when the voter got on line. They could have been waiting for hours, she suggested.

Trump’s complaint alleged that on Friday, November 4,  polling sites were supposed to close at 8pm local time, but that according to a poll watcher at Cardenas Market in Clark County, the head of the polling site said that he was keeping the site open until the market closed at 10pm, at the instruction of the registrar. The poll watcher, identified as Ronald Ketcham, said that he was also told that polling would continue for anyone who was already online inside the market when it closed at 10pm. According to Ketcham, as many as 300 people may have arrived at the site after 8pm.

On top of everything else, Judge Sturman said that Trump failed to follow proper procedure because he never notified the Nevada Secretary of State, who she said was a key player in all this. After pointing out all the flaws in Trump’s case, Judge Sturman finally cut off his attorney, telling him to “Have a seat.”