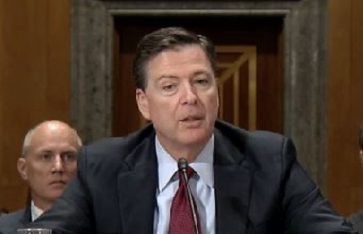 When the decision was announced in July that the FBI would not recommend charging Hillary Clinton over her use of a private email server, top Democratic Party politicians almost universally praised Director James Comey.  However, things changed dramatically last Friday afternoon. The strong support and praise Democrats had for Director Comey went out the window soon after the FBI Director informed lawmakers about agents uncovering emails in a separate case that seem be related to the Clinton email probe.

Two days after Director Comey announced the decision to not move forward with the Clinton email probe, House Minority Leader Nancy Pelosi made a point to praise Director Comey during a press conference on July 7. “Let me just say this about Director Comey, first,” Pelosi said on July 7.  “This is a great man.”

Pelosi has now changed her tune, issuing a statement suggesting the letter to lawmakers was drafted with language that allows Republicans to misrepresent its significance. “The public interest would be served by the FBI providing the facts, rather than allowing Republicans to stoke innuendo and falsehoods 11 days away from a presidential election,” Pelosi said on Friday afternoon.

On July 7, Republican lawmakers called Director Comey to testify at an emergency hearing so he could further explain the Bureau’s decision.  Congressman Cummings began his opening remarks at that hearing by heaping praise on the FBI Director.  Cummings (and other Democrats on the committee) also blasted Republicans for questioning Comey’s integrity. “I want to begin by commending you and the public servants at the FBI for the independent investigation,” Cummings told Director Comey at the hearing.

On Friday, Cummings issued a statement suggesting Director Comey only sent the letter out of “concern about being attacked for not keeping Republicans informed of any possible development….”  He also called on Director Comey to release additional details about the probe.

“I believe the FBI now has an obligation to make public as much information as possible as soon as possible to eliminate any inaccuracies,” Cummings said. Fox News clipped together a quick montage that highlights some of the most prominent Democratic Party politicians who flipped on Director Comey after he sent the letter to lawmakers on Friday.

One of the strongest expressions of support for the FBI Director came just two weeks ago from Clinton’s running mate, Tim Kaine, during an interview on Fox News Sunday. “The FBI, under he direction of a wonderful and tough career public servant, Jim Comey . . . somebody with the highest standards of integrity,” Kaine told host Chris Wallace.

However, on Sunday, Kaine suggested that Director Comey violated Justice Department procedure by sending the letter to Congress just over a week before the election.“You violated these two protocols . . .  You owe the public full information,” Kaine said on Sunday during an interview on ABC News.

Perhaps the biggest flip-flop on Director Comey comes from retiring Nevada Senator Harry Reid.  Earlier this year, Reid had high praise for the FBI Director.“No one can question the integrity, the competence [of Director Comey],” Reid said.

But it now appears as though Reid did not intend to include himself in the group of “no one” who could question Director Comey.  Reid penned a scathing letter on Sunday that not only questioned Director Comey’s actions, it also accused him of possibly violating the law by sending the letter to lawmakers.

“Through your partisan actions, you may have broken the law,” Reid wrote in the letter. “The clear double-standard established by your actions strongly suggests that your highly selective approach to publicizing information, along with your timing, was intended for the success or failure of a partisan candidate or political group.”

One day after the hearing, on July 8, Hillary Clinton gave her first interviews with the press since Director Comey announced the decision to not recommend charges. During those interviews, Clinton spoke highly of the FBI Director, saying she “greatly appreciate the work that the FBI and Department of Justice did, and they handled it very professionally.”

Yet, within hours of learning about Comey’s letter Clinton’s campaign staffers were repeatedly blasting Director Comey, and the candidate followed suit during campaign stops over the weekend.” It is pretty strange to put something like that out with such little information,” Clinton told the audience at a rally over the weekend.  “It’s unprecedented and it is deeply troubling.”