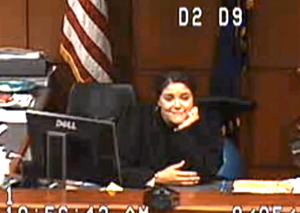 At the very end of July, a judge in Kentucky named Amber Wolf made headlines for becoming so angry when a defendant was brought before her without pants on that she called the Metro Corrections Deputy Director while still seated at the bench and let him have it.

Well, the woman who caused such a stir for defending the seemingly basic rights of a defendant in her court is back at it again. Yet another video of Wolf has been making the rounds online. This time, she chose to temporarily suspend a no-contact order between two married defendants so that the man could meet his one-month-old baby for the first time. The female defendant, his wife, had given birth to the child while they were awaiting their trials and were not permitted by law to communicate.

While wrapping up James Roeder‘s hearing and getting ready to move onto Ashley Roeder‘s hearing, the judge noticed Ashley holding up a baby and trying to get James to see it. She made the decision to allow contact between the two — who are accused of breaking into a warehouse to steal televisions — so that James could meet the child there in court. She said this to local news affiliate WDRB:

I saw her try to hold the baby up when he came out for his case to be called with his attorney. And I thought that he hadn’t seen that. And it occurred to me after we finished this case that he had not met his baby — who was 30 days old — and that he was not going to get an opportunity to meet his baby anytime in the near future.

She said that “not as a judge, but as a person,” it was one of the best things she has ever done.

Okay, okay. All in favor of her getting her own show on Court TV, say aye…