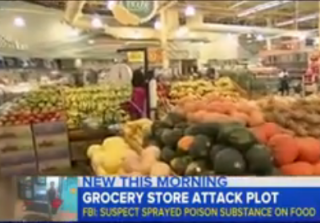 Federal officials have apprehended a man who they suspect sprayed food at a number of supermarkets with a poisonous liquid over the course of several weeks. The man, whose name has not been released, has admitted to contaminating items at three different stores in the Ann Arbor, Michigan area, including a Whole Foods, Meijer, and Plum Market.

He allegedly used a substance made up of hand cleaner, water, and Tomcat mouse poison. According to MLive.com, officials do not believe that it is harmful to anyone who may have eaten the foods. Still, Jamie Clover Adams from the Michigan Department of Agriculture and Rural Development encourages caution, saying that customers of the stores should throw out “any foods purchased from salad bars, olive bars and ready-to-eat hot and cold food areas from these stores between mid-March and the end of April.”

The FBI caught the man after receiving tips from the public.