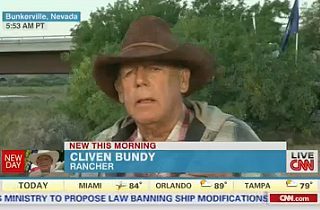 You’ve got to love a lawyer who just doesn’t quit. Famed Larry Klayman asked, for the fifth time, to be admitted pro hac vice (lawyerspeak for “just this once”), so that he might defend Cliven Bundy in federal court in Las Vegas. And like a parent refusing the repeated request from a bratty child, the 9th Circuit smacked down Klayman’s “emergency” request yet again. From the language of the opinion, Justices Fletcher, Gould and Bybee rather enjoyed telling Klayman where he could shove his writ of mandamus.

For those not acquainted with Larry Klayman, he’s sort of the Doctor Oz of the counsel table: he has sacrificed the respect of his peers for salacious and high-profile work. Klayman has filed dozens of lawsuits against the Clinton administration, and went on to sue everyone from Dick Cheney to Mark Zuckerburg, OPEC to the NSA, and even his own mother. Klayman also founded Judicial Watch, a conservative “watchdog” group that causes no end of trouble for Hillary Clinton and Barack Obama.

Klayman has been sanctioned, sued, and banned by judges, clients, and various state bars. The list of violations is long and impressive. Klayman, in characteristic style, has often fought back –even trolling a California federal judge who ruled against him, and accusing him of being Anti-Semitic, and “obviously drunk” at the bench. It takes a lot for a lawyer to be “banned for life” from a courtroom — but as I mentioned, Klayman isn’t your average attorney.

Larry Klayman saw the case of Cliven Bundy, and apparently felt it was a match made in attorney-client heaven. Bundy has been incarcerated and awaiting trial for over a year for his part in the 2014 Bundy standoff – an armed confrontation between Bundy’s cattle-rancher friends and law enforcement over withheld cattle grazing fees in southeastern Nevada. Klayman asked, again and again, to become Bundy’s lawyer. And that’s where things got crazy. Bundy already had a lawyer. Nevada attorney Bret O. Whipple (no relation to the Charmin toilet paper guy) is already Bundy’s counsel of record. And when Klayman filed a motion to appear on Bundy’s behalf, Whipple didn’t even sign it. So for all the court knows, Klayman is orchestrating this entire thing on his own. The 9th Circuit called Klayman out for his lack of logic in yesterday’s decision:

“Why Bundy (or Klayman) thinks that … Klayman could file a petition for a writ of mandamus on behalf of Bundy, we do not understand.”

And when federal courts say they “do not understand” things, that’s code for “go sell crazy somewhere else.”

More ridiculous still is that in his pleadings, Klayman justified the need to be admitted pro hac vice on the grounds that Whipple (a Nevada attorney with more than twenty years of relevant experience) is inexperienced and wholly unqualified to represent Bundy. The 9th Circuit gently suggested that Klayman’s pants were on fire:

“The assertions made by [Klayman] about [Whipple] are demonstrably false. Either Klayman has failed to ascertain the facts by, for example, talking with Whipple or looking at Whipple’s website, or he has deliberately misled this court. Neither option paints Klayman in a good light. At best, Klayman has shown such a casual acquaintance with the facts that he is guilty of at least gross negligence in his representations to this court.”

Trial enthusiasts are mourning the Court’s decision yesterday, because a lengthy courtroom drama including Cliven Bundy and Larry Klayman would definitely have been entertaining. No word yet on whether Bundy actually wanted Klayman, or whether this entire thing was some sort of delusion of advocacy grandeur in Klayman’s rather colorful mind.