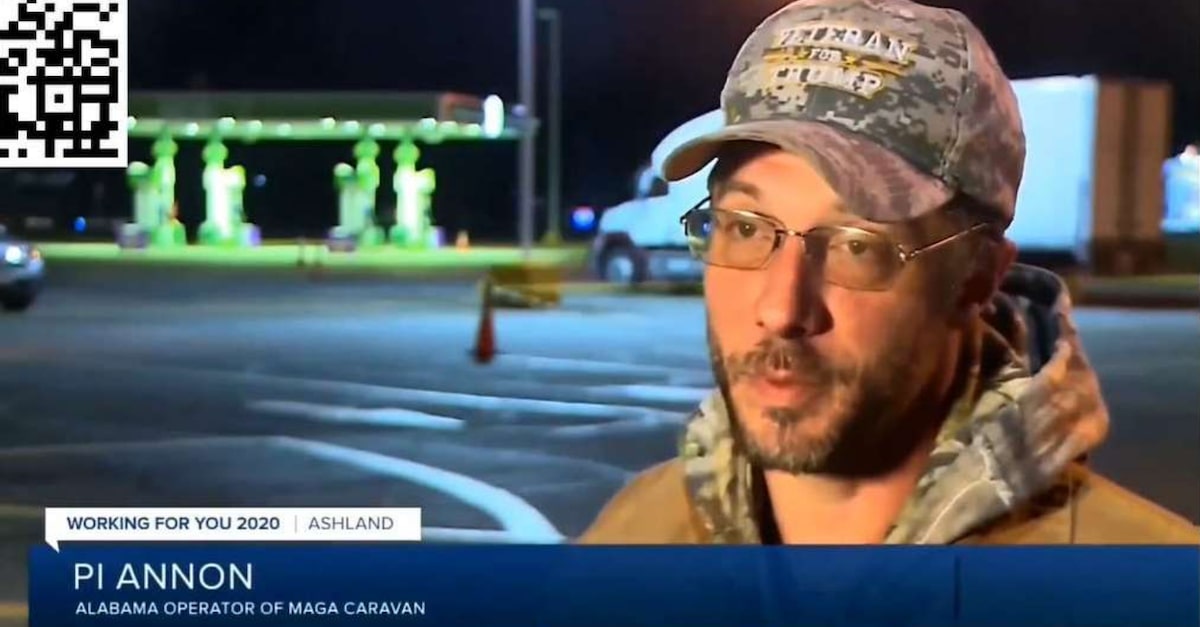 Prosecutors included this photo of Kenneth Joseph Owen Thomas, 38, wearing a “Veteran for Trump” hat and speaking to a local TV outlet under the name Pi Annon.

A self-described “MAGA Caravan” organizer going by the name “Pi Annon” has been charged by federal prosecutors with assaulting police during the siege of the U.S. Capitol—and ordering his fellow rioters to “hold the line” during that onslaught against law enforcement on Jan. 6th.

Authorities believe that man is 38-year-old Ohio resident Kenneth Joseph Owen Thomas, who spoke to a local TV outlet in Ashland under his pseudonym in his “Veteran for Trump” camo hat.

“Even after law enforcement officers pushed him back, Thomas returned at least twice to punch or strike the officers with his fist and forearm,” the affidavit states, describing the video. “Thomas continued to attack law enforcement this way or attempt to push them back for at least 25 seconds straight, from approximately 4:22 to 4:23 p.m.”

Minutes later in the same video, Thomas could be heard barking “hold the line” to his fellow rioters, the FBI says.

In another bodycam video, the FBI alleges: “Thomas approached the assembled law enforcement officers at approximately 4:28 PM and hit the officers with his forearm and elbow.” 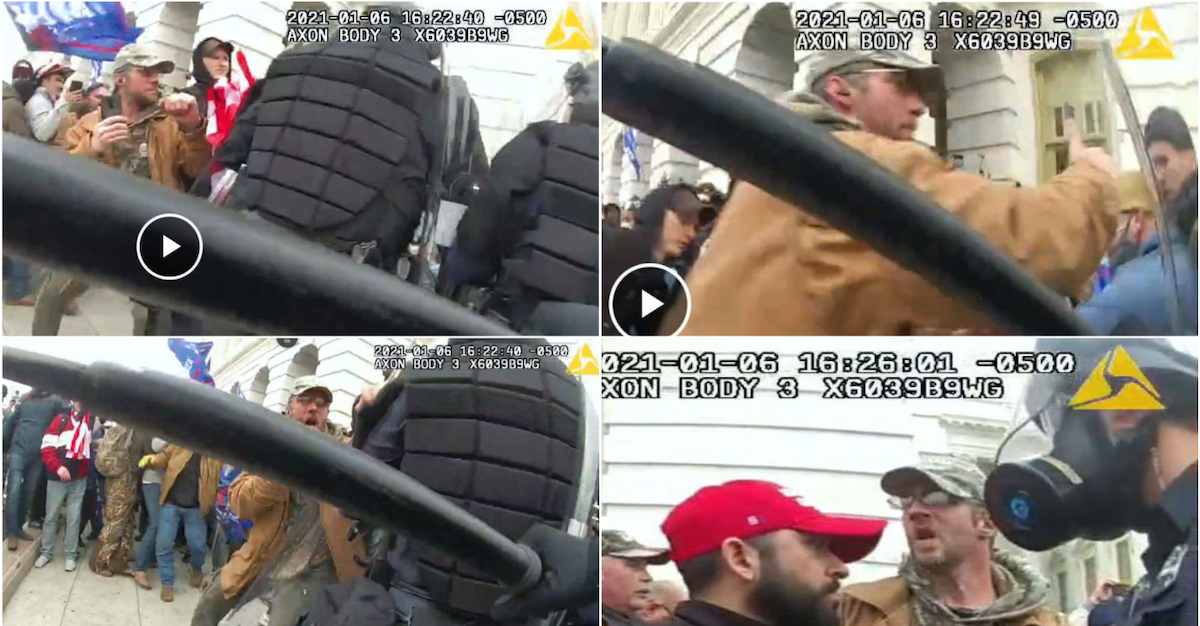 These are stills from police bodycam videos embedded in the complaint against Kenneth Joseph Owen Thomas.

Authorities claim that yet another bodycam video shows Thomas assaulting more police officers after that.

“As the law enforcement officers advanced, Thomas turned to his side, using his elbow and shoulder to strike the front line officers,” the affidavit states, adding the footage shows the suspect “push back against the officers in this way four more times and attempt to punch with his fist once.”

“Subsequent interviews with law enforcement officers who were present at the Upper West Terrace confirmed that the depicted individual did, in fact, attack them,” the FBI wrote. “Officers stated that this individual ‘was one of the first to come in and start hitting [and] pushing officers on the line’ and ‘tried to kick [their] shield,’ ‘tr[ied] to punch around [their] shield,’ and ‘engaged other officers.’ Throughout his interactions with law enforcement on the Upper West Terrace, Thomas continually held a cellular phone up, apparently recording the events as they occurred.”

After the FBI sent “Be On the Lookout” posters—sometimes known as BOLOs—roughly 15 tips poured in, authorities said.

“The second tipster was a member of #SeditionHunters, a Twitter-based ‘global community of open-source intelligence investigators (OSINT) working together to assist the U.S. FBI and Washington D.C. Capitol Police in finding people who allegedly committed crimes in the January 6 capitol riots,'” the affidavit states.

According to the complaint, this collective confirmed Thomas’ city of residence and spouse’s name and found his account names for Gab and Telegram, two apps that became popular with the political right after Twitter purged accounts associated with U.S. Capitol rioters and banned the former president.

On Wednesday, the Telegram account listed on his complaint, “Pi Anon Chat,” had the message: “So I was arrested by the FBI today. They were very polite & professional (aside from the SWAT team & flashbang)[.] I was awarded the courtesy of a Bond.”

Law&Crime could not independently corroborate the claims made by that account.