Prosecutors: Capitol Rioter Who Shot Birds and Named Them After Democrats ‘Pummeled’ a Cop, ‘Hit Him with an Uppercut’ 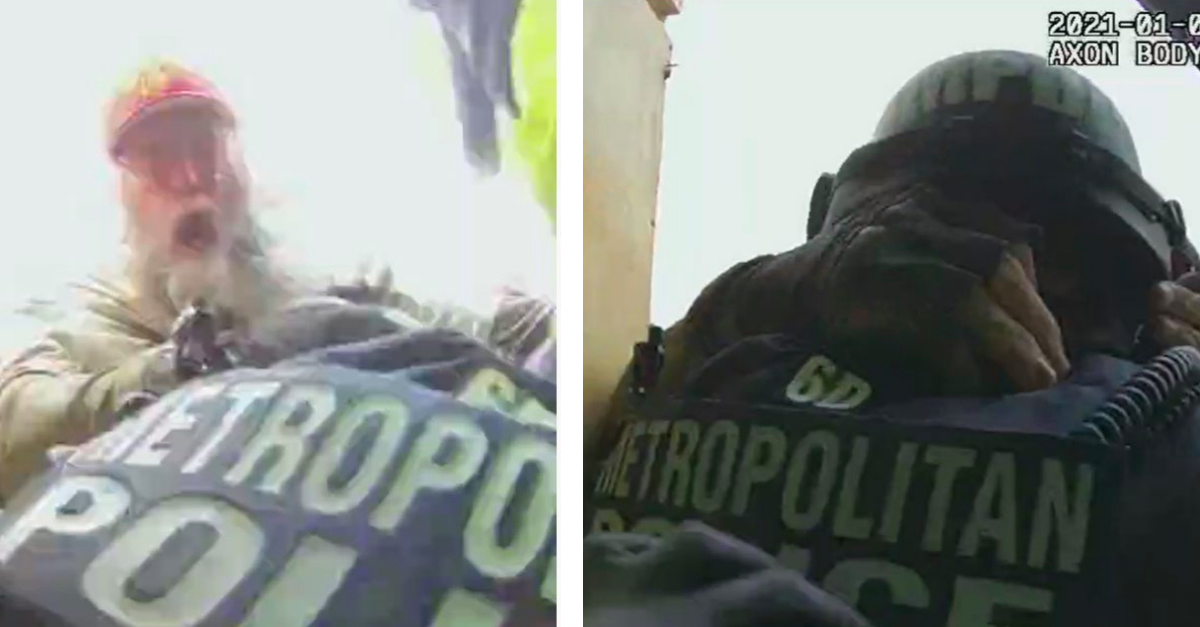 Federal prosecutors asked a federal judge to deny bail for a man that they say participated in the Jan. 6 riot at the U.S. Capitol, where he allegedly assaulted at least one police officer and stole a camera containing critical evidence off the body of another officer.

Michael Lopatic Sr., of Lancaster, Pennsylvania, is currently facing a maximum of 21.5 years in prison on charges of assaulting an officer, violent entry, and disorderly conduct in a restricted building.

In a motion seeking to keep Lopatic detained without bond until his trial, prosecutors categorized his actions at the Capitol as “particularly troubling,” and argued that the significant potential sentence provided a “compelling incentive to flee.”

According to the filing, between 4:00 and 5:00 p.m. on the day of the insurrection, a Metropolitan Police officer identified only as “C.M.” was rushing to the aid of another officer, identified as “B.M.,” who had been “engulfed by the violent mob” and was under assault when Lopatic “climbed over a handrail and charged at C.M.”

“After the defendant climbed the barricade, he assaulted C.M. by continuously punching him in the head. At one point, the defendant grabbed C.M. by the head and appeared to hit him with an uppercut,” the memo stated.

The attack was captured by an officer’s body camera and several stills were included in the filing. 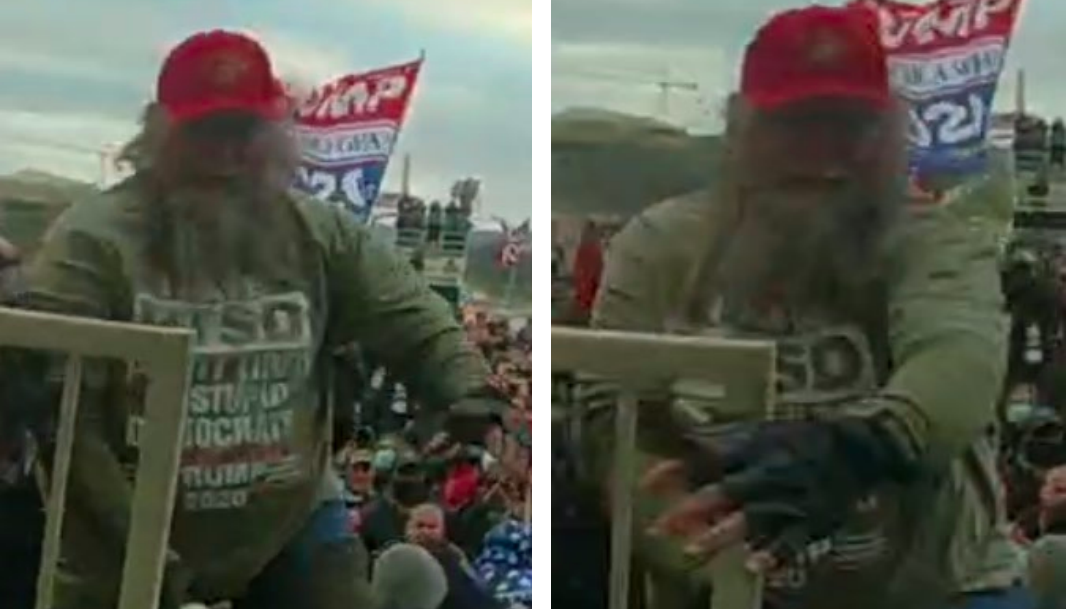 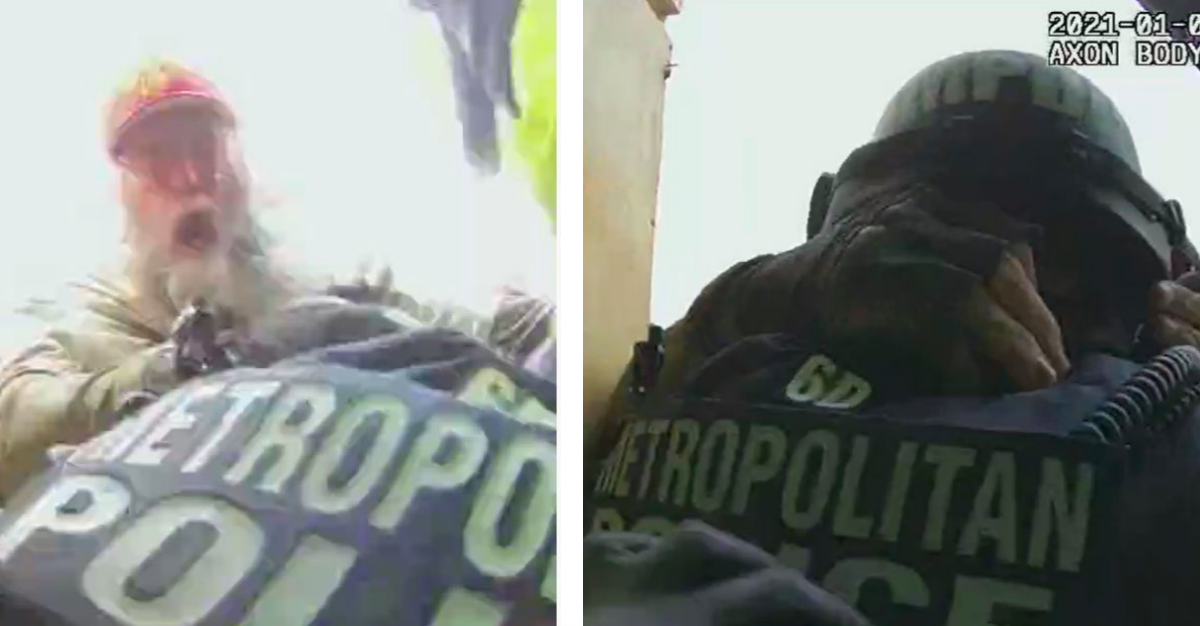 Prosecutors contend that Lopatic then had the awareness to go after evidence that would help authorities identify the rioters responsible for assaulting B.M.

“After pummeling C.M., the defendant descended the steps of the Capitol and made his way to B.M., who at the time was surrounded by a group of protesters trying to protect him from the violent mob. Upon reaching B.M., the defendant reached through the human shield and stole B.M.’s body worn camera,” the memo stated. “That the defendant had the foresight to traverse an angry mob to take what would have been a crucial piece of evidence in bringing those who attacked the officers – and the Capitol – to justice shows that he was not merely swept up by the passions of the day. Rather, the defendant was there to fight, and he had no intention of being held accountable for his actions. Consistent with that, upon his arrest, the defendant admitted to agents with the Federal Bureau of Investigation that he stole B.M.’s body camera and that he disposed of it on his way home to Lancaster County.”

The government’s case was further bolstered by Lopatic’s social media pages, where he allegedly made several disturbing posts portending violence, including several pictures of birds he had killed and named after Democratic politicians.

“I got a double today,” read a Facebook post from Nov. 4. “The dog flushed them up together. Full choke. Two shots, two kills. Both head shots. I got a rooster and a hen. I named them Joe and Kamala.” 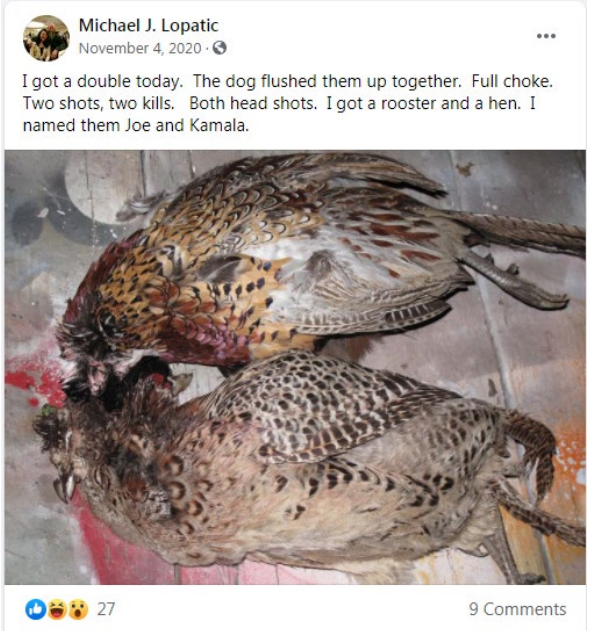 Another post depicting a dead bird said he shot it while the bird was “running her mouth,” adding, “I called this old bird Nancy,” in reference to Speaker Nancy Pelosi.

[image via U.S. District Court for the District of Columbia]