New Jersey Man Who Bragged on Facebook About Urinating in Pelosi’s Office Pleads Not Guilty in Jan. 6 Case 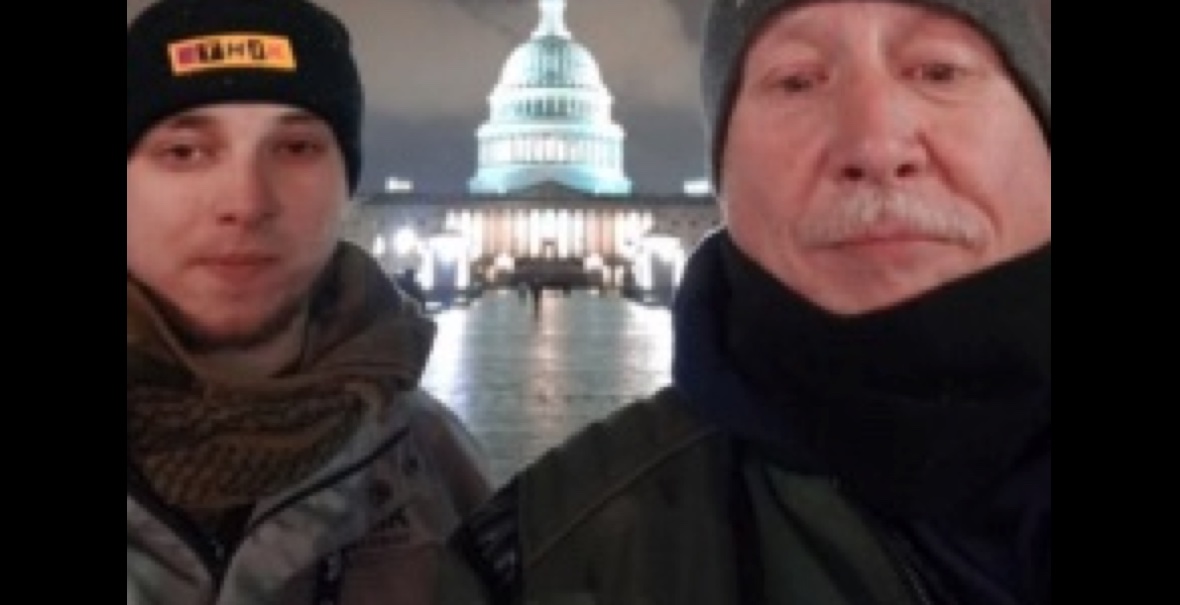 The New Jersey man who allegedly breached the Capitol on Jan. 6 and bragged about urinating in the office of the Speaker of the House has pleaded not guilty, along with a son he said recorded video of the incident.

“I pissed in her office,” James Douglas Rahm Jr. allegedly wrote in a text to a friend that day, according to FBI filings. “My son’s got video.”

The “her” in the text refers to House Speaker Nancy Pelosi (D-Calif.) and is in response to a text that reads: “Go find Pelosi rip her fucking head off.”

Rahm also posted on Facebook that he had urinated in Pelosi’s office.

“Get back inside,” a Facebook user posted in response to Rahm posting a picture of himself shortly after having been been hit with “pepper spray.”

“Pissed in her office,” Rahm replied, followed by what the FBI describes as a “strong man emoji.” 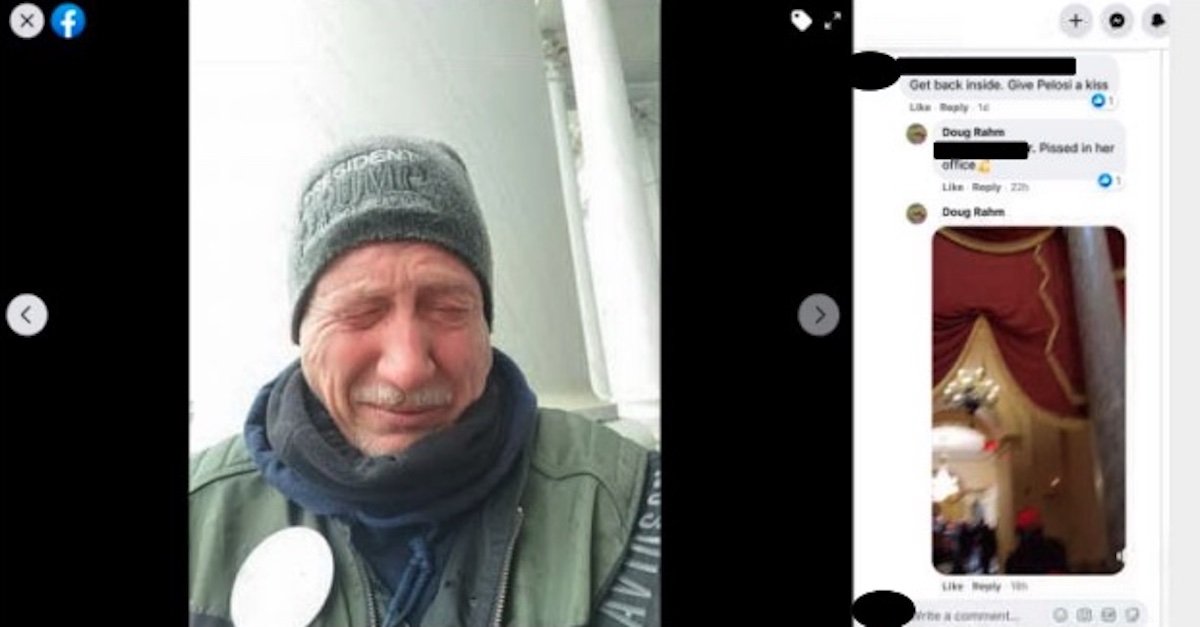 Rahm and JD had travelled to Washington on Jan. 5 with plans to attend Donald Trump‘s rally on Jan. 6, according to the complaints against them. JD told investigators that he had gone to Washington to capture footage of the planned Trump rally. Father and son separated at one point, with JD joining friends at a different side of the Capitol building.

According to the FBI, JD’s mother was concerned about Rahm posting a picture of JD at the Capitol to social media. When authorities searched Kelly Rahm’s phone, they saw a message sent from Rahm on Jan. 9 that had a picture of him and JD in front of the U.S. Capitol and Washington monument.

“No I just deleted it because I want it off my phone,” Rahm responded. “I’m deleting my Facebook also.” 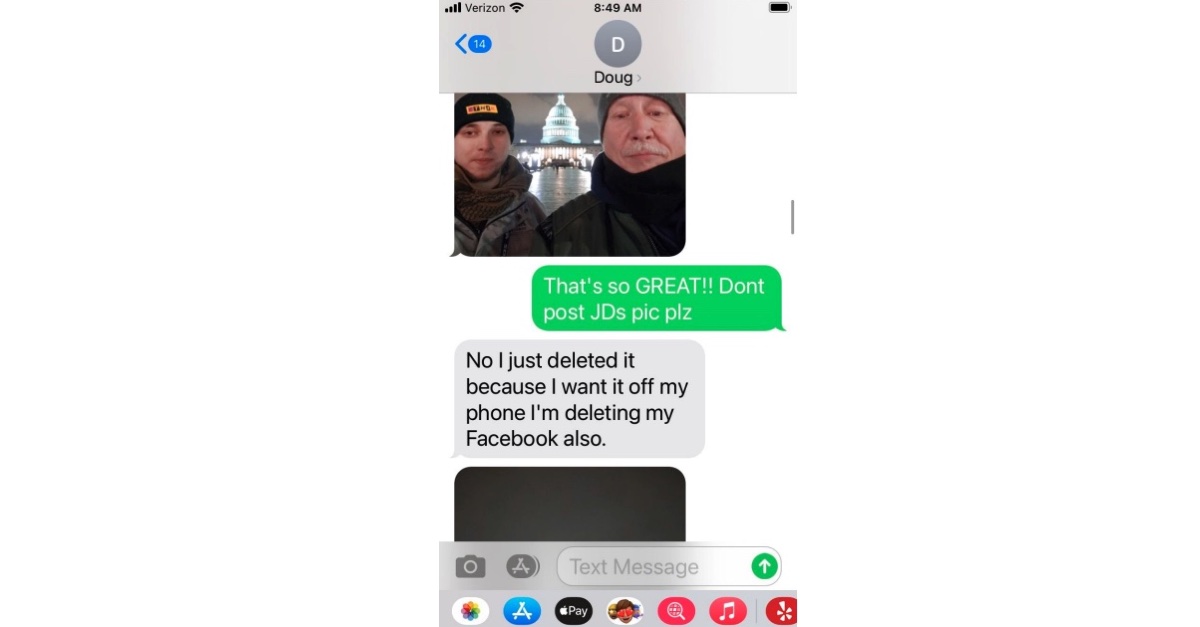 According to the FBI, the informant who first provided information about Rahm noticed that most of the Facebook posts Rahm had put up about the Jan. 6 riots had been deleted.

According to an FBI filing, Twitter video shows JD as part of a group pushing its way inside the Capitol building.

“[JD] is seen forcefully entering the frame and leaning on the person in front of him, while holding up his GoPro camera,” the statement of facts says. “This person then turns around to look at [JD].”

Investigators say that video footage on JD’s GoPro camera shows the group “[JD] was in, overpowering U.S. Capitol Hill Police officers, to force the U.S. Capitol doors open from the inside.” The FBI says that JD “is among the individuals at the front of this crowd.”

JD is also heard on video he posted to Snapchat moments before he entered the Capitol. “Holy sh*t, holy sh*it. Oh my f*ing God, we just stormed the Capitol. Holy F*ck,” he said, according to the FBI.

As for Rahm, he appears to have documented portions of his time at the Capitol on Jan. 6 on social media.

“From my experience it was Patriot’s [sic] trying to take our house back. Nobody burned anything, nobody broke anything except for a door and the window. All the papers running all over in the offices we’re done just for news cameras we destroyed nothing we didn’t knock over one piece of paper only the front door. We the people tried to take our house back now they will blame it on Trump. Disgusting anti-Americans.”

The FBI also provided this exchange, which took place in response to a picture of Rahm with swollen eyes titled “Pepper Spray”:

Rahm: “yes do not believe the media there were no anarchist no antifa just patriots trying to take our country back. Yes I was there the pepper spray is just wearing off…”

‘Is This Because of that Trip They Took?’

Kelly Rahm was the person who answered the door when authorities went to execute a search warrant at what they believed was Rahm’s home in early February.

“At this location, KELLY RAHM, mother of JD RAHM III asked law enforcement ‘is this because of that trip they took?'” FBI documents say. “When asked what trip she was referring to, KELLY RAHM declined to comment further.”

JD and Kelly live at this residence; Rahm told the Press of Atlantic City that although the deed to that house is still in his name, he lives in Philadelphia.

Rahm said in that interview that he regrets his involvement in the Jan. 6 Capitol breach, but added that law enforcement is also responsible.

Rahm also told the Press of Atlantic City that he regrets the impact his actions at the Capitol have had on his family.

“I’m not ashamed of being a Trump supporter,” Rahm said, “but I am ashamed of going into the Capitol, and I’m ashamed that it has done this to my ex-wife and kids. She’s devastated.”

Rahm denied having actually urinated in Pelosi’s office, and told the Press of Atlantic City that he only said he did to impress a friend online.

Although it’s not clear from the FBI filings whether video of Rahm doing this actually exists, the FBI investigation does place both of them at Pelosi’s office during the Capitol breach: JD told investigators he had entered entered her office suite, and Rahm posted to Facebook that he had also been in Pelosi’s office.

Hogan, a Ronald Reagan appointee, ordered the parties to continue exchanging discovery and to return for a status conference on Jan. 31, 2022.

You can read the Statements of Offense for both Rahm and JD, below.