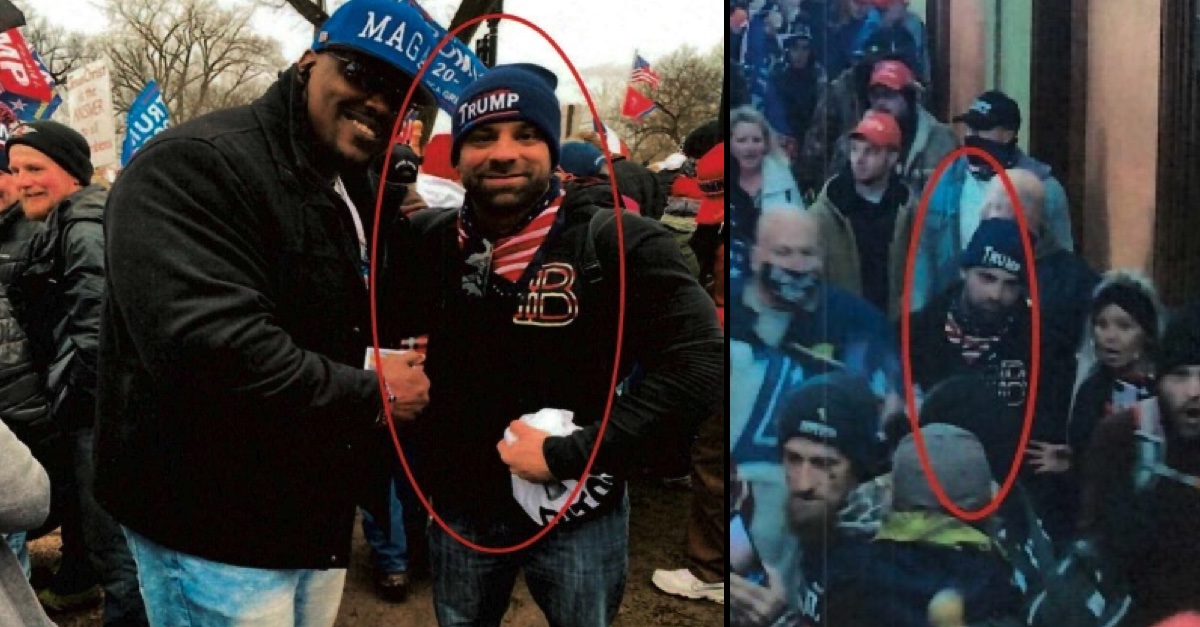 Images via the FBI.

A New Jersey man whose coworkers alerted the FBI to his participation in the Jan. 6 attack at the Capitol has pleaded guilty to a misdemeanor.

Lawrence Earl Stackhouse III, 34, was apparently done in by his own actions: according to prosecutors, Stackhouse had taken Jan. 5 and 6 off from work to travel to Washington. According to one witness, when Stackhouse returned, it was “common knowledge” that he had taken cellphone video while inside the U.S. Capitol building on Jan. 6, 2021.

Stackhouse is one of scores of Donald Trump supporters who overran the police and swarmed the Capitol building that day in what authorities have broadly described as an attempt to stop Congress from certifying Joe Biden’s 2020 election win.

At Friday’s plea agreement hearing before Chief U.S. District Judge Beryl Howell, Stackhouse admitted that at the time he entered the Capitol building, he did not have permission to be there. He also admitted to entering the Rotunda and later walking down a hallway near the office of House Speaker Nancy Pelosi (D-Calif.).

Stackhouse acknowledged that he attended the former president’s so-called “Stop the Steal” rally with two people, and on Jan. 7, he sent one of them text messages that said “don’t regret one thing” and “fuck the government.”

According to prosecutors, Stackhouse’s ardent support for Trump had previously gotten him into trouble at work.

According to one witness interview, Stackhouse had been reprimanded for “displaying political signs and attires in support of former President Trump, which violated their employer’s policies.”

The criminal complaint against Stackhouse doesn’t identify his employer.

A witness told the FBI that Stackhouse had been identified by his employer as being associated with “hate groups” from his social media. That witness later walked that back by saying that the employer had no information that Stackhouse specifically supported hate groups. Instead, the witness (according to prosecutors) eventually agreed that the defendant was a “strong supporter of President Trump who had expressed that support at work in a manner inconsistent with the employer’s policies.”

At Friday’s hearing, it was revealed that Stackhouse wore a shirt to the Capitol bearing the insignia of the Proud Boys, a right-wing extremist group whose members and leaders have at times espoused white nationalist views.

Despite this, Stackhouse denied any connection to the group.

“Are you a member of the Proud Boys?” Howell asked Stackhouse.

Howell, a Barack Obama appointee, asked Stackhouse if he was wearing the shirt because agreed with what the Proud Boys stand for.

Stackhouse denied this, saying that he got the shirt because he liked the colors on it, and because the text on the back of the shit “all had to do with Trump.”

Surveillance video from inside the Capitol on Jan. 6 shows Stackhouse walking down a hallway with what appears to be office doors on either side. The video shows others breaking items and, in one case, taking an American flag that appears to have been inside one of the offices.

Prosecutors were able to identify Stackhouse because of the “Trump beanie hat, American flag bandana, and distinctive sweatshirt” he was wearing.